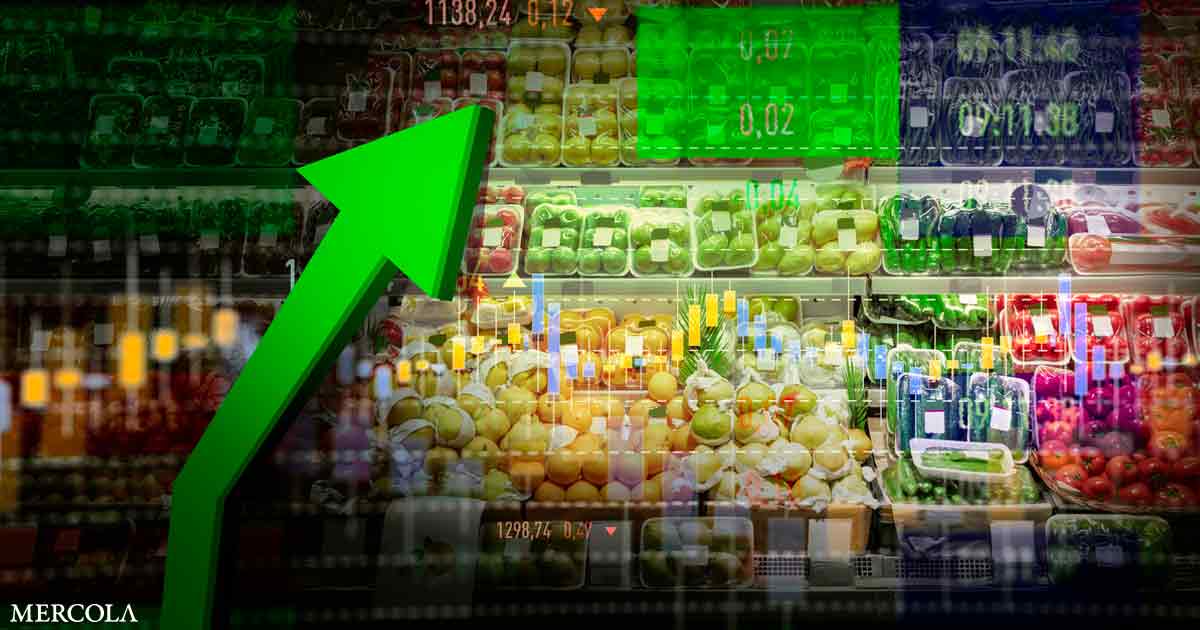 Why Food Prices Are Expected to Skyrocket

In the featured video, “Breaking Points” cohosts Krystal Ball and Saagar Enjeti discuss one of the greatest threats currently facing the people of the world, namely food shortages and skyrocketing food prices.

But while the Ukraine conflict is cited as the primary cause, it’s not the sole reason. Price inflation was already ramping up well before Russia went into Ukraine, thanks to the uncontrolled printing of fiat currencies that occurred in response to the COVID pandemic. Governments’ COVID response have also wreaked havoc with global supply chains, causing disruptions that continue to this day.

The climate has also been uncooperative, causing poor harvests around the world. China, for example, has reported it expects the lowest harvest yields in history this year, thanks to serious flooding of its farmland in the fall of 2021.4

That said, the Russia-Ukraine conflict is certainly making a bad problem worse. Ukraine is known as “the bread basket” of Europe, responsible for producing and exporting 12% of all food calories traded on the international market. Russia is also a major exporter of food, and together with Ukraine, the two countries account for nearly 30% of global wheat exports, nearly 20% of the world’s corn and more than 80% of the sunflower oil.5

According to the U.S. Department of Agriculture’s projections, wheat exports from Russia and Ukraine will be reduced by more than 7 million metric tons in 2022. At the same time, the Ukrainian government has decided to ban all export of wheat, oats, millet, buckwheat and cattle, to ensure food safety for its own people, while Russia has banned exports of fertilizer.6

As reported by Wired, the current food crisis in Ukraine is made up of several components, and the effects will have a worldwide rippling effect, thanks to our dependency on global trade:7

“Goods that have already been harvested — last autumn’s corn, for instance — can’t be transported out of the country; ports and shipping routes are closed down, and international trading companies have ceased operations for safety. (Plus, while those crops sit in bins, destruction of the country’s power grid takes out the temperature controls and ventilation that keep them from spoiling.)

This year’s wheat, which will be ready in July, can’t be harvested if there’s no fuel for combines and no labor to run them. Farmers are struggling over whether to plant for next season — if they can even obtain seeds and fertilizer, for which supplies look uncertain …

Analysts worry that the countries that buy the most wheat from Ukraine — predominantly in Africa and the Middle East — will have the hardest time paying as prices rise.”

Scott Irwin, an agricultural economist and professor in the College of Agricultural, Consumer and Environmental Sciences at the University of Illinois told Wired magazine:8

“This crisis is beyond the normal ability to shuffle supplies around. We’ve exploded that system, and the cost is going to be extreme economic pain.”

Together, Russia and Belarus provide nearly 40% of the global exports of potash, a key fertilizer ingredient. Russia also exports 48% of the global ammonium nitrate, and combined with Ukraine, they export 28% of nitrogen, phosphorous and potassium fertilizers.9

Experts are now predicting fertilizer prices may double as a result of Russia’s ban on fertilizer exports. For some farmers, that will be a death knell that causes them to go out of business. The rest will be forced to charge more for their commodities, resulting in skyrocketing food prices.

Are there any solutions to this pressing dilemma? I would argue that there are, but it’ll require rapid response and adaptation from farmers everywhere. As explained in “Kiss the Ground,” a documentary about biodynamic farming, a beautiful harmony exists within nature, and we can benefit by tapping into that natural system with biodynamic practices rather than working against it.

Biodynamic agriculture builds upon the foundation of organic farming. That means zero pesticides and synthetic fertilizers are used. But biodynamic then goes a step further. The goal is to make the land better than it was before. It doesn’t just stop the destruction of soil, but actually regenerates it.

The farm as a whole is basically viewed as one organism, where each part of the farm supports the rest. Livestock have their role, as do microorganisms and beneficial insects. Rather than working against you, they’re now working for you to improve the fertility of the soil and the quality of the food grown in it.

Biodynamic farming is really about being a part of nature and working with it rather than trying to conquer nature through unnatural and ultimately destructive means.

Biodynamic farming can also, over time, help stabilize the climate. Not only do biodynamic farmers not pollute the air, water or soil in the first place, but the plants also pull carbon from the air, depositing it back into the soil where it does the most good, and requires far less watering. Regenerative practices also prevent the loss of topsoil and increase rainfall.

For example, regenerative ranchers in Northern Mexico, in the Chihuahuan Desert, who have added 1 million acres of rotational grazing, report getting 15% to 20% more rainfall than their neighbors who haven’t regenerated their land.

Many of the food products we sell under the Mercola brand are produced by Demeter certified biodynamic farmers in eight countries. Demeter is the oldest ecological certification in the world. Most recently, we’ve initiated the first-ever standards for Demeter Certified Biodynamic supplements as well.10

We also fund the Billion Agave Project, initiated by Regeneration International on a regenerative farm in Mexico run by the Organic Consumers Association. It’s a fantastic solution that solves several problems at once.

This project is a game-changing ecosystem-regeneration and reforestation strategy that uses a combination of agave plants and mesquite (a nitrogen-fixing companion tree), to salvage and regenerate degraded semi-arid lands that aren’t suitable for other crops.

Forty percent of the world is arid or semi-arid and in danger of becoming desert where nothing will grow. But we can reverse this process using native plants and permaculture techniques such as this one.

By taking a limb from a healthy mesquite tree, adding some natural hormones and wrapping the branch with a bag filled with compost, you will, after three to four months, have a small tree ready for planting as new roots grow into the compost-filled bag. At that point, you can either plant it into a container or directly into the soil.

In this way, the mesquite supports the growth of the agave without need for chemical fertilizers, and the agave can then be used to produce a fermented nutrition-rich biomass that supports grazing livestock that otherwise might not have enough to eat.

A Way to Support Grazing Cattle on Semi-Arid Lands

Agave is best known for producing tequila, but a local farmer in Mexico discovered he could use the massive leaves, which are typically discarded as junk, to produce a nutrient-rich livestock feed. Cows, sheep, goats, pigs, chickens and even sheepdogs enjoy it.

The feed is produced by finely chopping up the leaves, each of which can weigh 40 to 80 pounds, and then fermenting them in a closed container. To this fermented mash, you can then add mesquite pods at a ratio of 80% to 90% agave leaf and 10% to 20% mesquite pods. This mix is superior to alfalfa in terms of nutrition, but costs only a third or a quarter of the price.

A big part of the cost-savings is from the reduced water consumption. Alfalfa needs about 26 times more water than agave and mesquite. Most of the animals on the farm eat the natural vegetation and get the agave mash as a supplement.

However, by adding garbanzo beans — another low-water crop — you could produce a feed that the animals could live on exclusively. Considering some areas are now considering culling their livestock herds due to a shortage in cattle feed,11 this could be a novel solution in some instances.

Changing the farming subsidies to prioritize regenerative farming would go a long way to changing the status quo, but private investing is another route to success that is now coming to the fore.

This is a type of stock different from anything we’ve seen so far. Basically, these stocks will allow fund managers, private investors and corporations to invest in natural assets. The part you end up owning is the ecosystem services of that land.

So, for example, you could own the environmental services resulting from the Billion Agave Project, which include carbon sequestration amounts and water savings. Over time, as the whole system matures and the soils are regenerated, your asset rises in value.

This new asset system will allow Wall Street to divert financial assets into ecosystem assets that benefit the planet in a multitude of ways, and still get a return on their money.

The Organic Consumers Association has also developed a system of verification to go along with this new asset system. Using modern technology, it will be able to accurately measure things like the number and size of plants and the health of the soil.

Had heed been taken sooner, we wouldn’t be in such a precarious position right now. But hindsight is 20/20, and I believe many farmers will now be forced to make the tough choice to make the conversion to biodynamic if they want to survive in the long term.

They’re also using a blockchain accounting system to verify the calculations and make it very difficult to cheat. So, anyone who invests in a natural asset will be able to verify, several years down the road, at a very low cost, whether the asset has improved or degenerated.

Regenerative Farming Could Save the World

A number of people have pushed regenerative farming for decades, warning that the current chemical-dependent monoculture is unsustainable in the long run, and subject to geopolitical disruptions. We’re seeing the reality of those warnings right now.

Had heed been taken sooner, we wouldn’t be in such a precarious position right now. But hindsight is 20/20, and I believe many farmers will now be forced to make the tough choice to make the conversion to biodynamic if they want to survive in the long term.

Their transition is not going to bring immediate help to the global population, as it takes a number of years to turn depleted soils into soils that can support food production without chemical inputs. But we have to start thinking in the longer term if any of us are to survive.

As a nonfarmer, you can support this effort by buying food from regenerative and biodynamic farmers. Regenerative International, incorporated in 2014, has built a global network of regenerative farmers and ranchers, with some 400 affiliates in 60 countries.

You can find a map of these regenerative farms on RegenerationInternational.org. Of course, you can also implement regenerative strategies in your own garden, even if it’s a small one. The future does look bleak at the moment, with food shortages and skyrocketing prices appearing inevitable, but doing nothing is not the answer. We must all start thinking ahead and make wiser choices.

The globalization of food production has led us to the brink of disaster. The answer is to return to locally grown foods. Similarly, our reliance on chemical-dependent monocultures has just been proven to be a weak link that needs to be replaced by regenerative methods that don’t need chemicals to thrive. We have the answers to the problem. We just need to implement them, as rapidly as possible.

World Snooker Championship: Ronnie O’Sullivan through to second round at the Crucible | Snooker News

What’s The New Covid Omicron XE Variant And Should I Be Worried?