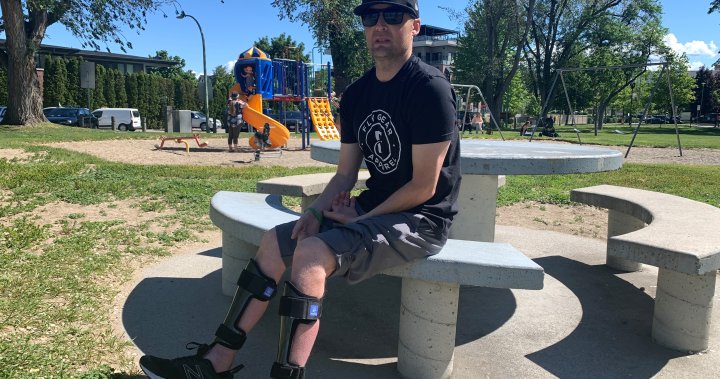 ‘What’s done is done’: Okanagan man one of the first in Canada to be compensated for vaccine injury

Being able to walk, albeit with orthopedic braces, is not something Ross Wightman takes for granted.

Wightman, 40, suffers from Guillain-Barré syndrome, a rare condition that affects the nervous system.

A husband and father of two young boys, the Lake Country man said he was diagnosed with the disorder last spring, less than two weeks after receiving the AstraZeneca COVID-19 vaccine.

“At that point, (the concern was around)  blood clotting,” Wightman said, reflecting on when he took the vaccine.

“But I figured it was best just to get it over with and move on with life, hopefully, and, you know, do the right thing.”

Just days after getting the shot, he started to experience extreme back pain.

“The pain got worse and worse,” Wightman said.

He was diagnosed with the disorder and spent the next 67 days in the hospital.

Doctors call for vaccine injury compensation plan in Canada – May 18, 2021

Now, after nearly a year of paperwork and medical submissions, Wightman is one of only a handful of Canadians to have the illness validated as a vaccine-related injury by the federal government.

He’s now been approved for compensation from the Vaccine Injury Support Program.

“I’d rather not be in that club, in a heartbeat,” he said. “It’s nice to have some recognition and there’s vindication.”

The program was established more than a year ago to offer financial support to Canadians who have experienced a serious and permanent injury as a result of receiving an authorized vaccine from Health Canada.

While the federal government has not updated its statistics, the Vaccine Injury Support Program website shows the number of claims submitted and approved during the first six months of the program.

And, according to the website, there were 400 claims submitted in 2021 between June 1 and Nov. 30 — only five have been approved by a medical review board.

“It’s indicative of our persistence with the program. Every week or every two weeks, phoning,  emailing, ‘what’s happening,’” Wightman said.

“Do you have all the paperwork you need? Has this doctor sent you this file?”

After getting COVID-19, food smells like garbage to these teen Quebec siblings. Here’s why

While Wightman won’t go into details as to how much he’s receiving but noted that he did not qualify for the maximum lump sum payout of $284,000.

In a letter from the Vaccine Injury Support Program, Wightman was told the injury indemnity will be paid as a lump sum and will be tax-exempt.  He has until Jul 30 to appeal the decision.

While the former realtor is relieved to be getting compensation, he said it’s less than the amount he was making before the injury.

“Everyone has a lifestyle that they’re used to or have to budget towards, you know, especially with kids and what-not,” he said.

“And so that’s going to be something that we’re going to have to kind of figure out, where to go from there.”

2:47
COVID-19 indicators are down in most parts of the country

COVID-19 indicators are down in most parts of the country

Wightman doesn’t know if and when he will work again.

For now, he said he’s focusing on his recovery, which includes going to rehab twice a week at Kelowna General Hospital.

“There’s no point looking back,” he said. “What’s done is done and focusing on the negativity — or the why me or poor me — it’s not what this is about.”

While the future remains uncertain, he’s determined to do whatever it takes to recover.

“I just need to be as positive as I can for myself and for my wife, and particularly my boys,” he said.

“Just to make a good example and show them that hard work and perseverance will pay off and that sharing your story to others and speaking up is also important.”

Denial of responsibility! Verve Times is an automatic aggregator of the all world’s media. In each content, the hyperlink to the primary source is specified. All trademarks belong to their rightful owners, all materials to their authors. If you are the owner of the content and do not want us to publish your materials, please contact us by email – [email protected]. The content will be deleted within 24 hours.
central okanaganCOVID-19 vaccine shotGuillain-Barre SyndromeHealthKelownaRoss Wightmanvaccine injuryVaccine injury compensation
0
Share FacebookTwitterGoogle+ReddItWhatsAppPinterestEmail