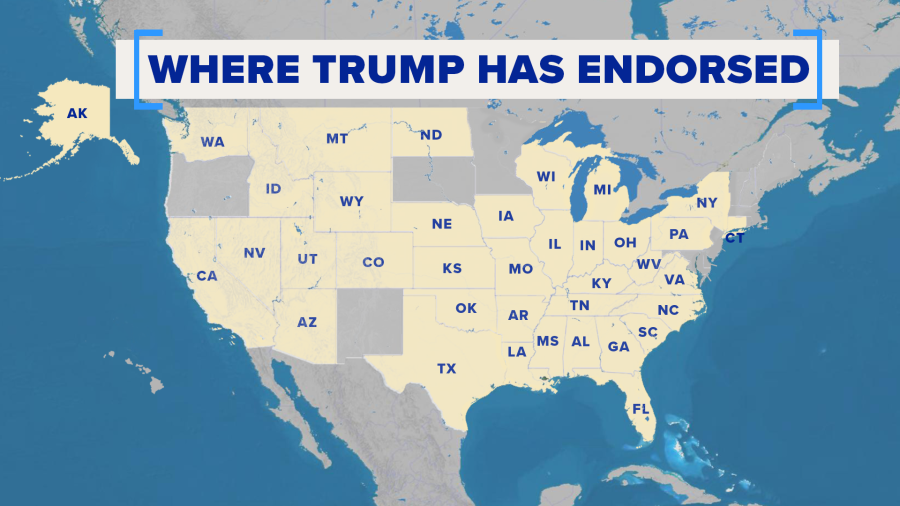 (NewsNation) — What has an endorsement from former President Donald Trump meant during this primary season? While the former president’s endorsement success rate is high, it could be deceiving.

More than 230 candidates in 39 states have been endorsed by the former president in this election cycle alone. Out of the 235 total endorsements, 179 have won, putting Trump at a 92% winning rate. But it’s not that simple.

According to Ballotpedia and the New York Times, of the 235 races Trump has issued an endorsement in, more than 200 of them saw the Trump-backed candidate running either unopposed or facing opponents with little to no campaign funding. At least 130 of those endorsed by Trump were also incumbents, which greatly increases the chance of reelection.

Some of Trump’s endorsements have come without some candidates seeking them, an indicator that the former president could be running up his success rate by backing members almost certain to win their races, according to The Hill. Trump also has waited to endorse a candidate until a clear frontrunner emerges — like with his last-minute endorsement of Tudor Dixon in Michigan’s primary for governor.

Trump has also changed his endorsements. He un-endorsed Rep. Mo Brooks (R-Ala.) in the GOP Senate primary and then endorsed Katie Britt, who had overtaken Brooks in the polls.

One note of significance, eight of the 10 House Republicans who voted for Trump’s impeachment last year are not going to be in Congress next year. Some like Rep. Adam Kinzinger (Ill.), decided to retire after this term, while others like Wyoming Rep. Liz Cheney lost the primary.

nifty50: Tech View: Nifty50 in overbought zone, but there are no signs of weakness. Here’s why