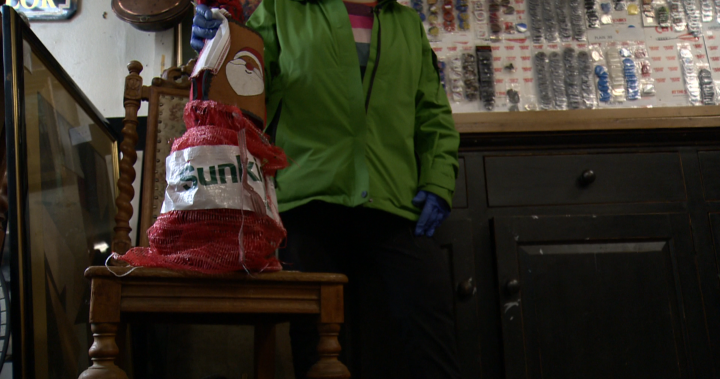 ‘We have to find a way to stop it’: Vancouver businesses battle vandalism during COVID recovery – BC

Packed with rare treasures from the past, Lorraine Shorrock’s store has been a staple on Vancouver’s Main Street for more than four decades.

“I was afraid to put more Plexiglass [in] because he manages to break the Lexan,” Shorrock said as she handled what was left of her most recent smashed window.

Small businesses in the city are under siege she said, from constant vandalism and theft.

“Nothing but being attacked – either their windows are broken or their stock is stolen,” Shorrock told Global News.

‘This should be the jewel of Vancouver’: Gastown store’s windows broken 7 times in 3 months

Surveillance from the family-run corner store captured a suspect smashing the front glass door and window last December, before breaking two side windows.

The owner couldn’t afford to fix all the damage so he launched a GoFundMe campaign to help pay for the cost of replacing the windows.

The Source’s storefront has been scarred by four broken windows in the last three months, and the latest suspect was caught in the act.

“Luckily, he made so much noise, the last one, that he woke up the manager upstairs,” said Shorrock.

Vancouver police were called around 5 a.m. on March 6. Officers were able to locate and arrest a 50-year-old suspect minutes later.

The next day, Shorrock made a shocking discovery in her window display.

“I was a little bit horrified, I thought God, no wonder he can smash windows so easily,” she said.

Hidden in a mesh grocery bag with Santa embroidered on the outside was a sledgehammer.

“It’s really quite frightening when you find out they walk around your city carrying a sledgehammer,” said Shorrock.

‘We don’t have all the answers’: Deputy police chief on rise of unprovoked attacks in Vancouver

Francis Joseph Boivin remains in custody charged with break and enter, and theft under $5,000.

“He definitely is well known to us. We have had prior interactions with him,” said Const. Tania Visintin of the Vancouver Police Department.

Boivin’s criminal history dates back more than two decades in B.C., where he’s been in and out of jail since 1998 for mainly property crime offences.

“We have to find a way to stop it,” said Shorrock.

Vancouver’s mayor said he is working to push the province to do more to tackle “repeat offenders” in the city.

In many cases, these suspects are battling mental health and addiction issues.

“Jail is not the place for them,” Stewart said at a March 15 media briefing.

“That’s why we have convinced the province to invest in complex care. The police themselves agree that we can’t arrest our way out of those circumstances.”

2:29
VPD say 4 people per day are victims of violent stranger attacks, and many of those attacks have a mental health component

VPD say 4 people per day are victims of violent stranger attacks, and many of those attacks have a mental health component – Mar 1, 2022

The 2022 provincial budget allocates $164 million over three years to expand the government’s complex-care housing program in order to help vulnerable people with mental health and substance use challenges who are falling through the cracks in the current model of supportive housing.

Shorrock’s business is across the street from 80 units of supportive housing and she doesn’t believe treatment options will work if people are released onto the same streets that feed their cycle of addiction.

“The way we’re handling it is not working.”

Denial of responsibility! Verve Times is an automatic aggregator of the all world’s media. In each content, the hyperlink to the primary source is specified. All trademarks belong to their rightful owners, all materials to their authors. If you are the owner of the content and do not want us to publish your materials, please contact us by email – [email protected]. The content will be deleted within 24 hours.
bc coronavirusBroken WindowsCanadaChronic Offenderscovid-19CrimepoliceProperty Crime
0
Share FacebookTwitterGoogle+ReddItWhatsAppPinterestEmail

boeing: Here’s everything we know about the China plane crash so far

Stock futures inch higher after another losing week on Wall…