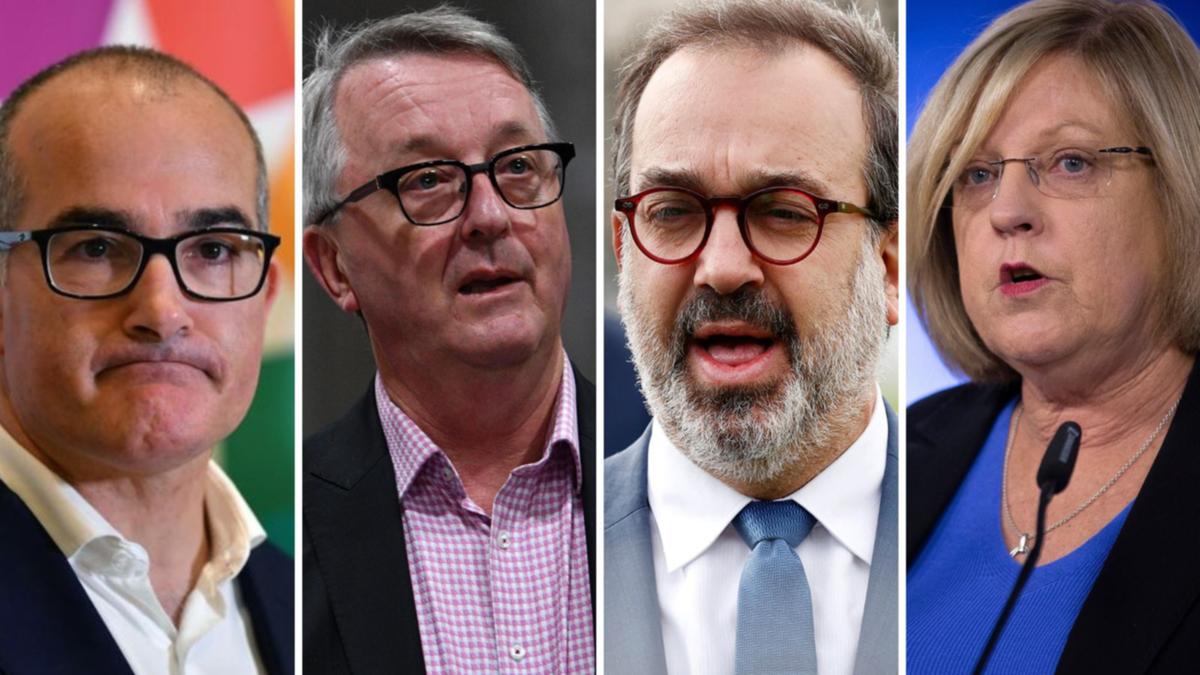 Four of Victoria’s most senior government ministers have confirmed they will step down from politics.

See more on the resignations in the video player above

Andrews thanked each of them for their service in separate statements and then held a press conference to announce some changes to his ministry.

He confirmed that the senior leadership team has recommended to caucus that Jacinta Allan be elected as the new deputy premier.

Deputy Premier James Merlino confirmed his twenty-year journey was coming to an end.

“I leave with feelings of deepest gratitude, a little sadness and excitement for the future,” he said in a statement.

Merlino thanked his “great friend” Daniel Andrews, saying he was proud to serve as his deputy for more than ten years.

He said he will still be working hard to see the re-election of the Labor Government in November.

“Renewal is critical for any government – fresh ideas and new energy,” he added.

“As hard as this is, I believe in my heart that renewal, new cabinet ministers around the table, is the best thing for the Government and our state.”

Merlino also thanked his family, saying politics had put a great burden on them and was looking forward to spending more time at home.

In response, Andrews said the state had “never had a better Acting Premier” when he took over the job when the premier recovered from a fall.

“I will forever be grateful for his care and concern but moreover, his competence – allowing me to focus on recovering from very serious injuries, confident, indeed certain, that the state was in the best of hands,” he said in a statement.

Health Minister Martin Foley was one of the most recognisable faces for Victorians during the pandemic.

He took over from Jenny Mikakos as health minister following her resignation in September 2020, and his exit amid the COVID-19 pandemic means the party will appoint a fourth health minister in as many years.

He has confirmed he will not contest the seat of Albert Park at the state election and will also be stepping down from Cabinet.

“The past two years have been a tough time for all Victorians,” he said.

“Many of us have come to reflect on what we aspire to achieve. I am no different

“I am looking forward to contributing to a better, fairer, sustainable Victoria in a different capacity. One that allows me more time to focus on my family and wellbeing and different interests.”

“Martin stepped up to do one of the most difficult jobs in a global pandemic. His professionalism, and his calm, deliberate direction saw Victoria through the worst of it,” Andrews said.

Police Minister Lisa Neville followed suit on Friday, saying choosing to not re-contest the seat of Bellarine at the upcoming state election was “one of the hardest decisions” she had to make.

Neville, who took leave last year for a serious flare up of Crohn’s disease, said she had consulted with doctors, family and friends in making the decision.

“I have had the privilege of working with three Premiers – Steve Bracks, John Brumby and Daniel Andrews – and taking on a range of portfolios during those times,” she said in a statement.

“But I want to particularly thank Daniel who has been a great friend and support during my time in the Parliament. It has been a great honour and privilege to serve as a senior Minister in his Cabinet since 2014.

In his response, Andrews described Neville as a “trusted colleague and dear friend”.

“I’ve long admired Lisa’s openness about her battle with Crohn’s disease, and how she’s encouraged frank conversations about it. Lisa has always tried to make things easier for others,” he said.

“She’s also always put her responsibility to the people of Bellarine and Victoria first. She’s put her job ahead of her health for a very long time – and now it’s time for Lisa to put herself first.”

She will continue to be a minister until the premier announces the new cabinet.

Neville said she knows she cannot work for another four years due to her long running fight with Crohn’s disease.

She took extended leave last year while battling severe Crohn’s disease flare-ups, and shed the emergency services portfolio when she returned to work in August.

“I wish it were otherwise, but I must be honest with myself, the wonderful people I work with and the Bellarine community.

“But while it is no longer sustainable from a health perspective for me to commit to being Minister and local member for the next term, I am not finished with public service and look forward to finding other ways to continue to contribute to public life after the election in November.”

Sports Minister Martin Pakula also confirmed he was stepping down, describing politics as “an all-consuming endeavour” emotionally and mentally.

While Pakula’s lower house seat of Keysborough has been scrapped as part of an electoral redistribution, he had been expected to move to the upper house.

“It’s a job which often demands an unhealthy measure of emotional and mental commitment,” Pakula added.

“As politicians, we are notoriously bad at appreciating when considerations for our own well-being demand that we stop and find something else to do with our lives.

“So after 16 years as the Member for Western Metropolitan, Lyndhurst and Keysborough, I’ve indicated to the Premier that I don’t intend to contest the 2022 State Election. Consequently, I will leave the Ministry as soon as the Premier settles on the team he wishes to take to the election.”

He wished Andrews and the Labor party success in the 2022 election.

In response, the premier described Pakula as “indefatigable until the end” and said he is grateful for his friendship.

Former Victorian senator Derryn Hinch told Sunrise on Friday that the move was “weird and unprecedented”.

“Four senior ministers, including the deputy premier, five months before an election is bizarre,” he said.

“They’ll dress this up as a rejuvenation of the cabinet, but it is a big problem with an election looming.

“Daniel Andrews would have had four health ministers in four years. It is not a good place for the premier to be in.”

Andrews held a press conference on Friday and confirmed some ministerial changes.

Mary-Anne Thomas will be the coordinating Minister for the Department of Health.

Andrews will make further announcements about his ministry on Saturday morning.

He did confirm that the senior leadership team has recommended Jacinta Allan as the new deputy premier.

Denial of responsibility! Verve Times is an automatic aggregator of the all world’s media. In each content, the hyperlink to the primary source is specified. All trademarks belong to their rightful owners, all materials to their authors. If you are the owner of the content and do not want us to publish your materials, please contact us by email – [email protected]. The content will be deleted within 24 hours.
NewsPoliticsVIC NewsVIC Politics
0
Share FacebookTwitterGoogle+ReddItWhatsAppPinterestEmail

The star that survived a supernova