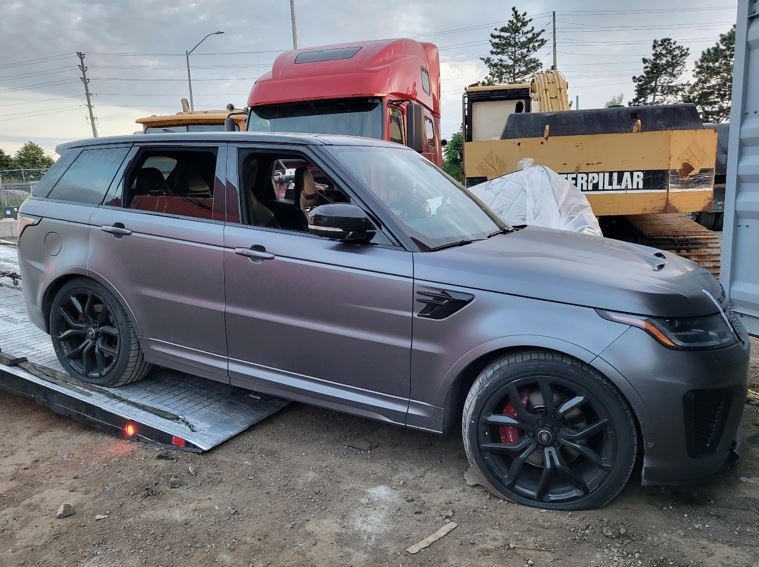 Finally it was the organized criminal world’s turn to be carjacked.

Three down and thousands more to go?

Who knows just how many stolen luxury cars are being stowed away in a Bolton shipping yard? The illegal auto-theft ring operators behind the multimillion-dollar criminal enterprise creating havoc on GTA streets may be the only ones who know.

“Officers from the Caledon Detachment of the Ontario Provincial Police (OPP) have recovered three high-end vehicles from a shipping container slated to be shipped overseas,” says a news release.

Seems these cars taken from driveways, or by armed carjackers, don’t just disappear into thin air but end up on giant metal containers destined for a cargo ship. The OPP intercepted one on June 20 and found some very expensive cargo — a 2020 Land Rover Range Rover SVR, a 2020 Lexus NX, 2019 Maserati Levante 61G.

“The shipping container was scheduled to be shipped to Nigeria,” OPP Const. Joe Brisebois told the Toronto Sun. “All vehicles were reported stolen from the Toronto area.”

Toronto Police say 3,500 cars have been stolen so far this year.

People in other parts of the world are receiving delivery of high-end cars and enjoy the fruits of someone else’s investment, while GTA insurance rates increase.

While some commit their thefts with technology, others resort to carjacking. Often the crooks get away, but not always.

As the Toronto Sun reported, Segal Suleiman, 34, was charged with robbery and assault with weapon on June 20 at Weston Rd. and Lawrence Ave. W.

And in a separate incident, Toronto Police also charged Andy Hakh, 33, with robbery, assault with a weapon and possession of a stolen car in a March 2021 incident near Steeles Ave. W.

Neither case has been proven in court.

While such arrests and the recovery of three stolen cars is a start, it doesn’t even put a dent in the carjackings that have been on the rise in the GTA.

Anecdotally, Canadians have known these cars end up on ocean-going ships, but this bust offers insight into what happens to them before they are loaded on board. These cars are hidden amongst the legal and legitimate cargo.

“It was moved from a location in Toronto to the shipping yard in Bolton,” Brisebois said of the Bolton container. “The vehicles weren’t driven to the location where they were recovered.”

Some ships have 4,000 containers on board, which is a challenge for border authorities.

Anybody who has had a vehicle stolen is urged to take a look at the images police have released.

“Mine was not there,” said Toronto City Councillor Mark Grimes. “But they belong to somebody.”

While high-profile victims like Grimes and Toronto Maple Leafs star Mitch Marner have had their Range Rover thefts make the news, most don’t.

Who knows who may be driving their Range Rovers now? And who will be next to have their vehicle stolen?

While the car theft part is difficult, Grimes said, the next phase is not fun either.

“You end up in a dispute with your insurance company over the value,” he said, adding it can take months to get a replacement.

In other words, the victimization doesn’t stop at the theft.

At least police did find some cars and now comes the hard work of trying to find out who stole them, who fences them, and who profits.

“The investigation is ongoing,” said Brisebois.

One container searched. More to come.