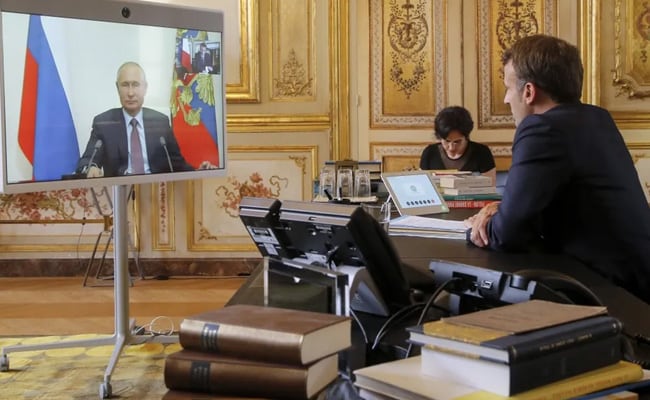 Emmanuel Macron talks to Vladimir Putin during a video conference in Paris. (File)

President Vladimir Putin on Sunday warned his French counterpart of the potential “catastrophic consequences” of what he said were Ukrainian attacks on the Zaporizhzhia nuclear power plant in a Russian-controlled area of Ukraine.

During a telephone call with Emmanuel Macron, Putin “drew attention to regular Ukrainian attacks on (Zaporizhzhia nuclear) facilities, including a radioactive waste storage facility, which is fraught with catastrophic consequences,” the Kremlin said in a statement.

The largest nuclear power plant in Europe has been a focal point of fighting in recent weeks, raising concerns of a potential nuclear incident.

Putin said Russian specialists at the plant were taking steps to ensure its safety and said Moscow was ready to continue work with the UN’s atomic agency to agree on “non-politicised” solutions to problems at the facility.

Ukraine’s nuclear energy agency said Sunday the final reactor at Zaporizhzhia was shut off as a safety measure.

During the call with Macron, Putin also accused Ukrainian forces of using Western-supplied weapons to target civilian infrastructure in the eastern Donbas region of Ukraine.

Ukrainian forces have launched a major counter-offensive to wrest back control of swathes of the east and pro-Moscow rebels this weekend reported that separatists were fighting “difficult” battles with Kyiv’s army in the Donetsk region in Donbas.

Denial of responsibility! Verve Times is an automatic aggregator of the all world’s media. In each content, the hyperlink to the primary source is specified. All trademarks belong to their rightful owners, all materials to their authors. If you are the owner of the content and do not want us to publish your materials, please contact us by email – [email protected]. The content will be deleted within 24 hours.
emmanuel macronrussia ukraine warUkraine Nuclear PlantVladimir PutinZaporizhzhia nuclear plant attack
0
Share FacebookTwitterGoogle+ReddItWhatsAppPinterestEmail

Rams had plans for Jimmy Garoppolo if 49ers released him?

An explosion at a Pakistan mosque leaves many dead and…

John Lennon thought two members of The Beatles were…

The late actress Janet Blair died aged 85 from a common…