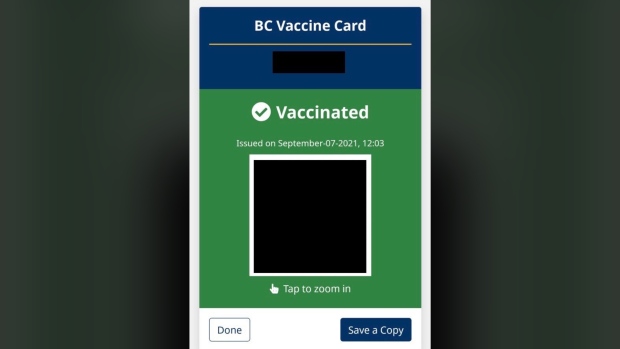 Vaccine passport system in B.C.: Province reveals how its COVID-19 plan will work

VANCOUVER —
Details of B.C.’s so-called “vaccine passport” system have been revealed by health officials, and residents of the province are asked to sign up online.

The website, which launched early Tuesday morning, asks for a resident’s personal health number, date of birth and date of COVID-19 vaccine. Those who already use the B.C. Services Card app can alternately log in that way.

Once the information is entered, the user can access a downloadable “B.C. Vaccine Card,” which contains a QR code that will serve as proof they’ve been vaccinated when the passport system rolls out starting next week.

This code is a square-shaped graphic which is similar to a bar code, and can be scanned on digital devices including smartphones.

It can be printed off for those without smartphones to carry, or saved as an image on the card-holder’s phone by taking a screenshot. Those without access to a computer can call the provincial vaccine line (1-833-838-2323) and request that a printed card be mailed to them.

The card will show whether a person is vaccinated with both doses or just one, or whether there is no record of a vaccine in the provincial registry.

The system is being announced by Premier John Horgan at a news conference in Victoria.

The vaccine card system is set to begin Sept. 13, at which time visitors to non-essential businesses such as restaurants and movie theatres will need at least one dose to enter.

The official launch is next week, but the health ministry said there will be a transition period up to and including Sept. 26, during which time vaccinated individuals can obtain their card. Paper records from vaccine clinics will be accepted as proof of vaccine during this time.

By Oct. 24, they’ll need to have both doses, and won’t be considered fully vaccinated for seven days after the second shot.

This requirement is currently in place until Jan. 31, but could be extended.

WHAT INFORMATION IS INCLUDED IN THE CODE?

Businesses can either scan the card through an app, or just look at the card and visually verify the name and other information.

Addressing privacy concerns, the provincial health ministry said the app used to scan these codes only reads vaccine information, and that the “absolute minimum” details are provided to businesses.

No other health information will be accessible or stored on the app or phone.

Still, the ministry said it’s important that people do not share their QR codes publicly, including on social media.

The technology used is from the global SMART Health Card framework, the province said.

This framework is being used elsewhere for similar purposes, and is standard for the provinces in Canada, the ministry said.

Similar technology is being or will be used across the country and for international travel.

REASONING FOR THE CARD

Horgan addressed claims he’s heard that the passport is a way to impede basic services from government.

Instead of thinking of it as limiting, he said, the card is meant to open things up, allowing those who have been vaccinated to take part in events that were previously shut down, or open in reduced capacity, earlier in the pandemic.

Dr. Henry said getting vaccinated is just one way to protect the community as a whole. Those who chose, for various reasons, not to get the shots, will just be protecting the community in other ways – namely, by sitting out from some activities for the time being.

Some cannot get the shot, including children, and some are more at risk of getting sick or even dying from the disease, so achieving immunity among most who are eligible is a key step in the province’s fight, B.C.’s top doctor said.

There will be no exemptions, officials said previously, as the measure is temporary.

“We’re not yet at a point where we can let down our guard,” Henry said.

“We know now that these vaccines are safe, they’re effective and they make a difference in stopping transmission, in stopping people from getting sick.”

Modelling data released last week suggested a person is 34 times more likely to require hospitalization from COVID-19 if they haven’t been fully vaccinated.

They’re also 12 times more likely to be infected than someone who has had both doses of vaccine, according to that data.

“Ultimately the choice is yours about whether you choose to be vaccinated or not, but what we need to do is make sure that we can continue to keep things open as much as possible, and that’s what the B.C. Vaccine Card is all about,” Henry said.

WHERE DO I NEED THE CARD?

Many non-essential businesses and facilities will soon require those who are 12 and older (born in 2009 or earlier) to show their card before they’ll be admitted.

According to the province, staff will ask to see both proof of vaccination and the vaccine card holder’s valid government-issued ID.

Proof will not be required to vote in the Sept. 20 federal election.

WHAT IF I’M JUST VISITING B.C.?

Visitors from elsewhere in Canada won’t have access to B.C.’s card, but will be expected to show the equivalent from their own province or territory. They will also have to show a government-issued ID card.

International visitors can show the proof they used when entering the country, as well as their passport.

A soft launch of the website was conducted ahead of the announcement, and was discovered by some eager or curious residents of the province.

While some found they could enter right away, others received an error message when trying to enter Health Gateway.

The message read, “We’ve found an issue and the Health Gateway team is working hard to fix it.”

In an email to CTV News, the provincial Ministry of Health said the site became visible as part of a “soft launch” to test capacity, and that any issues identified during that period would be worked through.

Later in the day, some had to wait as long as 40 minutes in a virtual queue to enter the site. This virtual “waiting room” is to keep the application from being overloaded, officials behind its design said.

“She made everyone feel special”: brother of stabbing victim