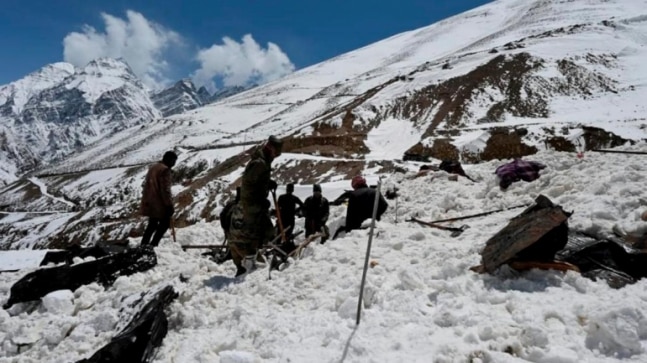 The death toll in the avalanche that occurred near the Indo-China border in Uttarakhand’s Chamoli district mounted to 12 on Sunday after two more bodies were recovered, officials said.

The rescue operation for six missing people is still underway.

On Friday, the avalanche occurred after a part of a glacier collapsed beyond Sumna on Sumna-Rimkhim road where labourers were engaged in road construction work.

Rescue operations were launched by the Indian Army immediately and 384 people were rescued. Seven persons have sustained critical injuries and are undergoing treatment.

“The bodies have been brought in two IAF helicopters to Joshimath where their post-mortem is being conducted,” Chamoli District Magistrate Swati S Bhadauriya said.

The Chamoli DM and Superintendent of Police Yashwant Singh tried to reach the avalanche site in a helicopter for an on-the-spot assessment of the damage caused, but it could not land in Sumna, and they returned after making an aerial survey of the area.

Information is being gathered from the BRO about those still missing after the avalanche, Swati Bhadauriya said, adding that compensation will soon be made available to the affected families.

Sumna, where the avalanche occurred, is approximately 25 km from Malari village and is located near the confluence of the Girthigad and the Kiogad, two streams that originate from the Dhauli Ganga river.

A joint search and rescue operation by the ITBP, NDRF, SDRF, the district administration and the BRO continues at the site amid odds posed by heavy snowfall in the area recently, Swati Bhadauriya said.

The snow laden roads in the area are also being cleared, she added.

Chief Minister Tirath Singh Rawat tweeted about the incident, saying an alert has been issued, and he is in constant touch with the BRO and the district administration for updates.

In another tweet, Rawat said Union Home Minister Amit Shah has taken immediate cognizance of the incident and assured the state of all help.

(With inputs from PTI)

ALSO READ: Nearly one-third of Uttarakhand’s tehsils are at risk of glacial floods

These Great Manga Have AWFUL Anime

Mom tosses newborn baby and toddler out of window before…

Canadians seeking COVID-19 vaccines in US should be…