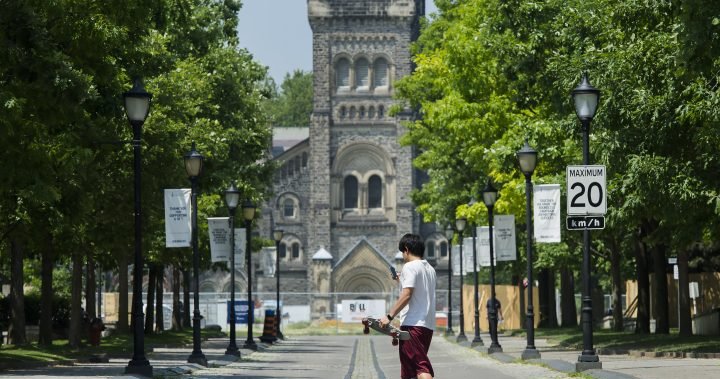 The decisions of several top-tier universities to make COVID-19 vaccination a requirement to return to campus is putting added pressure on holdouts to follow suit, with some professors hoping the moves signal a sea change in higher-education pandemic protocols.

Read more:
Wilfrid Laurier University to require COVID-19 vaccinations for everyone on campus

Outside Ontario, University of Saskatchewan — also a U15 school — announced Friday that proof of vaccination will be a prerequisite for in-person learning this semester.

The president of University of British Columbia also voiced support for mandatory vaccination Friday, and said the school is in talks with the provincial government about the issue.

Many academics applauded the long-called-for policy shift, while others have raised concerns that some schools’ protocols don’t go far enough to protect against the highly contagious Delta variant of the novel coronavirus.

Advocates acknowledge these measures may create complications as students head back to the classroom this fall, but say schools that don’t require inoculation risk the safety of their campus communities along with their reputations.

“It was clearly a question of waiting for the first domino to fall,” says Scott Forbes, president of the Manitoba Organization of Faculty Associations.

“The smaller universities are now going to feel the pressure, and I think it’s just a matter of time for most Canadian universities.”

The biology professor at University of Winnipeg said faculty members who favour vaccine mandates have faced resistance from school administrators who say such measures would be too challenging to implement.

For much of the summer, that seemed to be the prevailing consensus among Canada’s post-secondary institutions, even as many U.S. counterparts ratified rigorous vaccine rules.

Seneca College in Toronto broke from the pack earlier this summer by making vaccination a prerequisite of in-person learning, while offering students the option of online education.

Last week, the Council of Ontario Universities and Colleges Ontario called for a provincewide policy that requires the vaccination of post-secondary students, staff and faculty.

3:59
U of W faculty calling for mandatory vaccinations

U of W faculty calling for mandatory vaccinations

Earlier this week, University of Ottawa signed off on a similar policy for its campus. And with one U15 school on board, it wasn’t long before other institutions fell into line, Forbes said.

“I think it really was just a case of waiting for somebody else to go first,” he said. “I suspect the landscape’s going to look a lot different come next week.”

But not everyone in the academic community is so optimistic.

Critics say the devil is in the details.

While some universities want proof of immunization to access their facilities, others plan to largely rely on the honour system.

For example, University of Toronto said all members of the school community must self-disclose their vaccine status to come to campus this fall. Proof of immunization will only be required in “higher risk” settings, such as living in student housing, varsity sports and music instruction.

Those who can’t meet these strictures will have to participate in a rapid screening program and be subject to additional health measures.

In an open letter Thursday, the president of the University of Toronto Faculty Association blasted the school’s vaccine rules as “misleading and inadequate,” characterizing the changes as a “repackaging” of previous substandard protocols.

“To us, this is a public relations driven policy, not a health and safety driven policy,” Terezia Zorić said in an interview Friday.

Relying on self-disclosure leaves too much room for error in ensuring campus safety, said Zorić, noting the university has a system to verify whether students in residence have their shots.

She also took the university to task for not following the guidance of the world-renowned COVID-19 experts within its faculty.

“(It’s) not just that the emperor has no clothes,” she said. “If people believe that others around them are vaccinated, it will shape their behaviour, and that will cause harm.”

Richard Gold, a professor of law and science policy at McGill University, said schools face several logistical challenges in the coming weeks, including how to determine what constitutes proof of vaccination.

As the clock ticks down toward the start of the school year, Gold said this week’s policy rollouts have given students little notice to book both of their COVID-19 vaccine doses, and international students could face further complications in meeting schools’ immunization standards.

Despite these hurdles, Gold believes campus-wide vaccine mandates are not only feasible, but necessary.

Read more:
COVID-19: University of Ottawa mandates vaccines for everyone on campus

He notes these policy changes have been concentrated among a cadre of schools in southern Ontario. Even with University of Saskatchewan joining the club, schools in some parts of the country have notably avoided vaccine mandates.

A spokeswoman for Alberta’s minister of advanced education expressed disapproval of such a mandate for post-secondary institutions in that province.

“A student’s private vaccination status should not have to be disclosed to determine whether or not they can attend in-person classes,” press secretary Taylor Hides said in an email.

A spokesman for University of British Columbia said Thursday the provincial government has discouraged post-secondary institutions from mandating vaccination.

But on Friday, UBC president and vice-chancellor Santa Ono said he has informed provincial officials that he sides with the growing chorus of students and faculty calling for mandatory masks and vaccination.

“I want to assure you that we understand your concerns,” Ono said in a statement. “We are engaging with the provincial government on these issues.”

If the shifting tides don’t push reluctant administrators, Gold muses that liability issues may convince them, suggesting litigious critics may try to claim holdouts are not meeting their duty to protect students and staff from COVID-19 infection.

Denial of responsibility! Verve Times is an automatic aggregator of the all world’s media. In each content, the hyperlink to the primary source is specified. All trademarks belong to their rightful owners, all materials to their authors. If you are the owner of the content and do not want us to publish your materials, please contact us by email – [email protected]. The content will be deleted within 24 hours.
Canadacanada covid vaccinescanada covid-19 newsCanada Delta variantCanada Variantcovid vaccinescovid-19COVID-19 university
0
Share FacebookTwitterGoogle+ReddItWhatsAppPinterestEmail

What Is the Spoon Theory?