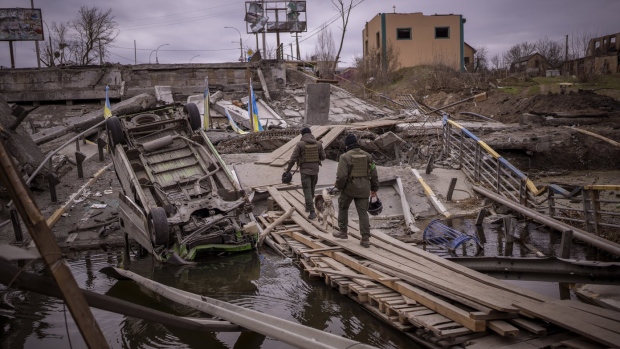 What’s happening in Ukraine today and how are countries around the world responding? Read live updates on Vladimir Putin and Russia’s invasion of Ukraine.

KYIV, Ukraine — Kyiv regional police said Thursday two mass graves with nine bodies were discovered the day before in the city of Borodyanka northwest of the Ukrainian capital.

Head of the Kyiv regional police Andriy Nebytov said two women and a teenager were among the “civilians killed by the Russian occupants.”

“I want to stress that these people are civilians. The Russian military deliberately shot civilians that didn’t put up any resistance and didn’t pose any threat,” Nebytov said, adding that some of the victims were apparently tortured.

All of the bodies were transported to the morgues of the Kyiv region for further forensic study.

The three leaders will be holding a press conference later Thursday in the Ukrainian capital, it said in a statement.

“I look forward to the meeting with Zelenskyy, where my message will be that Denmark will continue to help Ukraine,” Frederiksen said in a statement announcing her arrival in Kyiv Thursday. “The West stands together to support the Ukrainian people.”

Frederiksen is the first Nordic leader to travel to Kyiv since Russia began its invasion Feb. 24.

Sánchez’s office had announced earlier this week that the prime minister would travel to Ukraine following the visits by several European leaders, but officials had cited security concerns to avoid specifying the visit’s exact date.

Spain has also announced that it will reopen its embassy in the Ukrainian capital after closing it down within hours of the Russian invasion on Feb. 24.

In a short statement on the messaging app Telegram, Vereshchuk said that the effort to evacuate women, children and the elderly will continue on Thursday. She warned that “the security situation remains difficult.”

KYIV, Ukraine — Ukraine’s General Staff said Thursday in their morning update that the Russian forces continue the offensive in the east of the country with the goal of establishing full control over the Donetsk and Luhansk regions.

The Ukrainian forces in the two regions have repelled nine Russian attacks over the past 24 hours, destroying one tank, 10 armored units and two vehicles, one artillery system, two special engineering units, an anti-aircraft missile system and an ammunition depot, according to the update posted on the General Staff’s Facebook page.

The Russian military also continue “to launch missile and bomb strikes on military and civilian infrastructure throughout Ukraine,” the General Staff said.

In the southern Kherson region, which Russia has claimed to fully control, the Russian military “plan to organize the forced mobilization of the population for war with Ukraine,” as well as cut off “humanitarian support of the region from the Ukrainian authorities,” the General Staff said.

WASHINGTON — President Joe Biden is set to announce plans Thursday to send additional military aid to help Ukraine fight back against the Russian invasion, according to a U.S. official.

The official, who was not authorized to comment publicly and spoke on the condition of anonymity, said Biden will deliver a Thursday morning address at the White House detailing his plans to build on the roughly US$2.6 billion in military assistance the administration has already approved for Ukraine.

The new package is expected to be similar in size to the $800 million package Biden announced last week. It includes much-needed heavy artillery and ammunition for Ukrainian forces in the escalating battle for the Donbas region of eastern Ukraine.

Aamer Madhani and Darlene Superville contributed to this report from Washington.

LVIV, Ukraine — The Luhansk governor said Russian forces now control 80% of the region, which is one of two regions that make up the Donbas in eastern Ukraine.

One of Russia’s stated goals is to expand the territory in the Donbas under the control of Moscow-backed separatists.

Before Russia invaded on Feb. 24, the Kyiv government controlled 60% of the Luhansk region.

Gov. Serhiy Haidai said the Russians, who renewed their offensive this week in eastern and southern Ukraine, have strengthened their attacks in the Luhansk region.

After seizing Kreminna, Haidai said the Russians now are threatening the cities of Rubizhne and Popasna and he has urged all residents to evacuate immediately.

The Donetsk region, also part of the Donbas, has seen extremely heavy fighting as well, particularly around the port city of Mariupol.

KHARKIV, Ukraine — Some residents of the eastern city of Kharkiv have been living in basements for weeks, hoping to stay safe from Russian shelling. With no running water, gas or electricity, they collect rainwater and cook on open fires, burning debris from wooden buildings destroyed by the shelling.

In the Saltivka neighbourhood, some have sought shelter in a school basement, where they have used school desks, tables and chairs to make beds. More than 300 people slept in the shelter in the first days of the war, but most have left for safer places. Now, only a few dozen remain.

As she stirred a large pot of a thin vegetable soup, a woman said volunteers brought them cabbage, beets and canned beans.

“We mixed everything together and made borsht,” said Natasha, who gave only her first name.

Another woman pointed up at her damaged apartment. “All the windows and doors were blown off, but the walls held up,” said the woman, who gave only her first name, Larisa. “It’s impossible to stay there as it’s on the eighth floor and when the shelling starts it’s not for the faint of heart.”