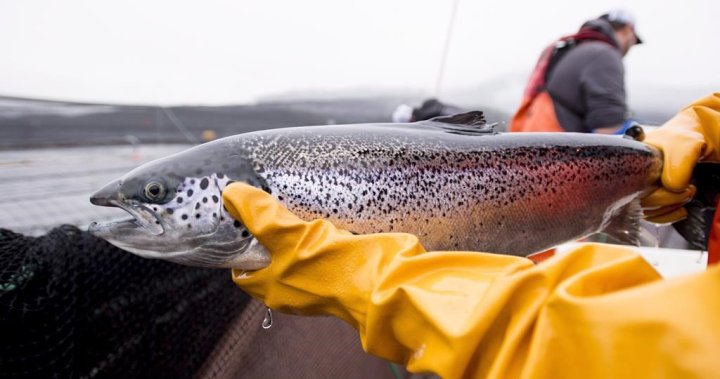 Dozens of fish farms outside the Discovery Islands will have their licences renewed for another two years as Ottawa reveals its transition plan away from open-net pen salmon farming in B.C.

A draft framework of the plan will be shared in the coming weeks, launching a new phase of public consultation that will last until early next year, Fisheries and Oceans Canada Minister Joyce Murray said Wednesday.

The federal department hopes to have a final plan in place by spring of 2023. Murray’s ministerial mandate letter tasks her with transitioning fish farming out of B.C. waters by 2025.

“Wild Pacific salmon are an iconic keystone species in British Columbia that are facing historic threats,” said Murray in a news release.

“We recognize the urgent need for ecologically sustainable aquaculture technology, and we are prepared to work with all partners in a way that is transparent and provides stability in this transition.”

The industry will operate within the current regulatory framework while the plan is finalized.

In a release, the Canadian Aquaculture Industry Alliance and BC Salmon Farmers Association called the announcement a “validation” of the importance of the salmon farming industry, but one that needs greater certainty.

“While we are encouraged that licences have been renewed, we genuinely needed a six-year license term that reflected our production cycle,” said Timothy Kennedy, president of the Industry Alliance.

“Longer licence terms would have provided the confidence to further invest in innovation and technology, leading to continued operational and sustainable improvements, job creation for coastal communities, and greater food security.”

Open-net pen salmon farming is a contentious issue in B.C., where many wild Pacific salmon returns are generally low and stocks are increasingly at risk.

Opponents of the practice are concerned about the spread of a potentially deadly disease — piscine orthoreovirus, or PRV — from penned Atlantic salmon to their wild neighbours. Recent studies have suggested PRV may not be as harmful to Atlantic salmon as some believe, but there are still gaps in knowledge about how the virus and disease affect wild stocks.

Last year, a study published in the peer-reviewed journal Science Advances said evidence suggests the virus is continuously spread between farmed and wild Pacific salmon as they migrate past the farms.

PRV, which devastated salmon farms in Norway, is a disease linked to heart and skeletal muscle inflammation in farmed salmon, and kidney and liver damage in wild B.C. salmon.

Galagame Bob Chamberlin, chair of the First Nation Wild Salmon Alliance, said Wednesday’s news gives him and other Indigenous leaders and stewards a “little bit of hope.” The coalition has long opposed open-net pen salmon farms in the province.

“Of course many of us believe this should have happened a long time ago, but a one-year transition planning process is welcome in order to ensure this is a defendable outcome in terms of court action or potential court action,” Chamberlain told Global News.

He also lauded a dual announcement of resourcing for First Nations to participate in the transition plan and related consultations. Many nations have not yet had an opportunity to engage DFO on the topic, he added.

Chamberlin said Wednesday’s news is the beginning of journey for wild salmon. After fish farms are phased, he added, the doubling down on the protection and remediation of salmon habitat can begin.

In a news release, the B.C. government said it respects federal jurisdiction over wild salmon and will continue to work as partner with Ottawa and First Nations to protect the resource, and to develop a “comprehensive federal support plan” for those affected by the upcoming transition.

In 2018, the B.C. government reached a major agreement with First Nations on Vancouver Island, announcing the transition of nearly a dozen Broughton Archipelago-area fish farms by the end of 2022. Part of that agreement included new rules for fish farm operators, slated to take effect this month.

Beginning in June, operators require clearance from DFO that they are not adversely affecting wild salmon populations, and will only receive provincial permits or renewals if agreements have been reached with the First Nations on whose territory they operate.

4:10
Victory in the fight to eliminate open-net fish farms

The phasing out of Discovery Island fish farms, however, has been delayed by a federal court decision to overturn a 2020 order from former fisheries minister Bernadette Jordan. In 2021, Federal Court Judge Elizabeth Heneghan decided the order breached the right to procedural fairness owed to the 19 fish farms that were expected to shut down by the end of June.

While open-net pen salmon farms continue to operate, Chamberlin expressed grave concern with the effectiveness of current regulations in protect wild stocks. He said he looked forward to reviewing the new “stricter regulations” promised by Ottawa in the interim.

According to the BC Salmon Farmers Association, 97 per cent of salmon produced in Canada is farm-raised. The industry employs 14,500 Canadians and generates more than $4 billion in economic activity annually.

With files from Global News’ Sean Boynton and The Canadian Press

Denial of responsibility! Verve Times is an automatic aggregator of the all world’s media. In each content, the hyperlink to the primary source is specified. All trademarks belong to their rightful owners, all materials to their authors. If you are the owner of the content and do not want us to publish your materials, please contact us by email – [email protected]. The content will be deleted within 24 hours.
Atlantic salmonBC fish farmingBC fish farmsDFOEnvironmentFish FarmsFisheries and Oceans Canadajoyce murray
0
Share FacebookTwitterGoogle+ReddItWhatsAppPinterestEmail