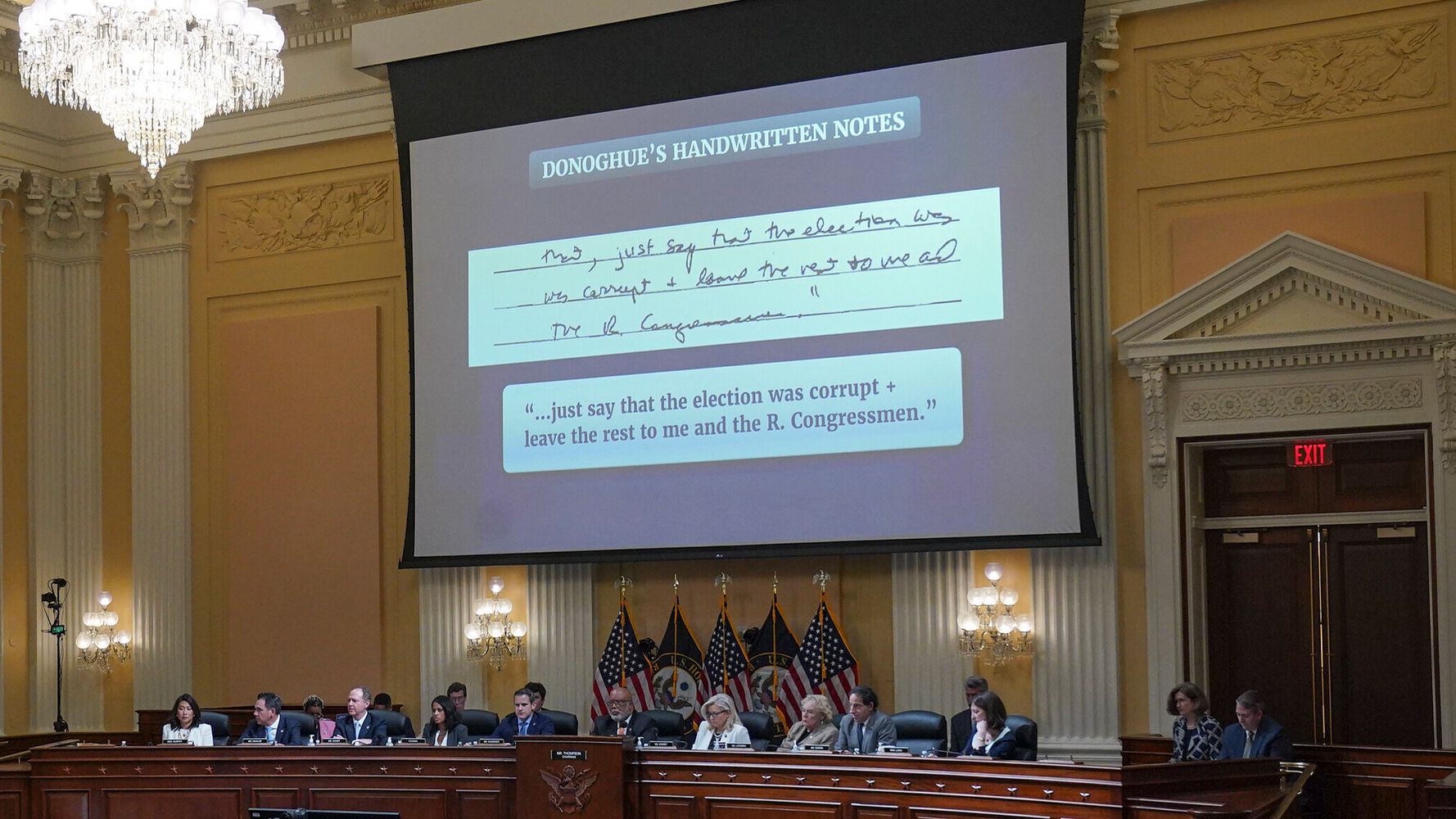 The former second-in-command at the Justice Department said Thursday that President Donald Trump urged him to simply say the 2020 presidential election he’d lost was “corrupt,” even though there was no basis for doing so.

Testifying before the House select committee investigating the Jan. 6, 2021, insurrection, Richard Donoghue, the former acting deputy attorney general, was asked about his notes from a Dec. 27, 2020, conversation with Trump.

In his notes, displayed on a large screen in the meeting room, Donoghue had written “just say that the election was corrupt + leave the rest up to me and the R. congressmen’”

“The president said, ‘Just say the election was corrupt and leave the rest to me and the Republican congressmen.’ So, Mr. Donoghue, that’s a direct quote from President Trump, correct?” asked Rep. Adam Kinzinger (Ill.), one of two GOP members on the panel.

“That’s an exact quote from the president, yes,” Donoghue replied.

Kinzinger also asked about a note in which Donoghue wrote that Trump said the Justice Department had “an obligation to tell people that this was an illegal, corrupt election.”

Kinzinger followed up by asking Donoghue if the Department of Justice had actually found evidence of corruption in the 2020 presidential election.

“There were isolated instances of fraud. None of them came close to calling into question the outcome of the election in any individual state,” Donoghue said.

The comments came at the final hearing for June of the committee. The hearing focused on efforts by Trump and others to sow doubts about the accuracy of vote totals and the validity of votes in some states by pressuring Justice Department officials in private to lend credence to a raft of debunked claims.

Denial of responsibility! Verve Times is an automatic aggregator of the all world’s media. In each content, the hyperlink to the primary source is specified. All trademarks belong to their rightful owners, all materials to their authors. If you are the owner of the content and do not want us to publish your materials, please contact us by email – [email protected]. The content will be deleted within 24 hours.
Department of JusticeDonald Trumpjan 6 committeeRichard Donoghue
0
Share FacebookTwitterGoogle+ReddItWhatsAppPinterestEmail

After 2-Days in Germany for G7 Summit, PM Modi Leaves for…