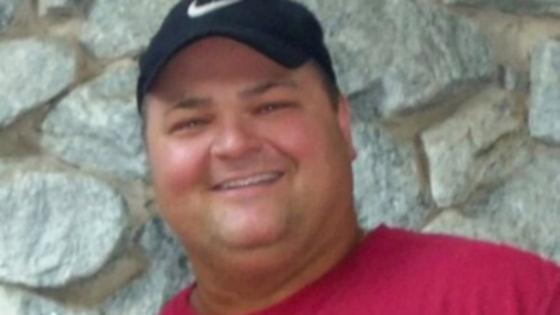 Thomas Wells, a former competitor on The X Factor, died earlier this month on November 13. He was 46.

Wells’ wife, Jessica, shared the tragic news in a Facebook post on Friday, writing, “I will always love you babe!! Your the bestest man in the whole world!!”

Accompanying the heartbreaking message was a nearly five-minute video that marked the first time since his death that she visited his grave.

Ms Wells tearfully shared details about her husband’s death, including a touching story about what she experienced while she was at the hospital with him.

“I feel like it’s not real, but I know it is. He was my best friend… It’s hard to explain,” she said.

“When Thomas passed away, it was the worst day of my life, but also the best day. Because an hour or two before he passed away, I kept hearing his song ‘Midnight Cry.’”

Ms Wells recalled the day her husband passed away, explaining, “When I got back up to the hospital, Aunt Becky was up there with him already and she came and got me and said that they needed to talk to me and I thought something bad had happened.”

“He was deteriorating really fast,” she said of his condition.

“The lack of oxygen in his brain was causing his body to shut down and his organs and everything was just not working right. It’s hard to explain. You could tell something was happening, his blood pressure was dropping really fast.”

She said that during that time, the group was around her husband praying while they played his rendition of “I Can Only Imagine.”

“We were all praying for a miracle for him to just survive it, but the miracle wasn’t what I was expecting,” she said.

“So while we were all around him praying, I was just praying to God, ‘Please, save my husband. I know you can do miracles, just let him be okay.’ And as we were playing his song, I felt this almost like nauseousness heartburn type thing in my stomach and up to my chest and in my heart I heard ‘My child, he’s home. I know your heart is heavy, but lean to be because he is home.’”

Ms Wells explained that she didn’t realise she had been saying that out loud until Becky told her that she not only said it, but yelled it in the room.

“Once that happened, I felt the whole room lift up just a little bit, like everybody’s sigh of relief knowing he was okay and he was home with our Lord,” she said.

Ms Wells ended the message on an emotional note, sharing, “And I know 100,000,000% that Thomas is up there waiting for me. So, I just wanted to document that on this Thursday, on Thanksgiving 2021, his favorite holiday.”

They did not have any children together, but resided in Idabel, Oklahoma with their three dogs: Chloe, Charlie and Zoey.

He is also survived by his parents, Ricky and Rosemary Dean, grandmother, Pat Dean, grandparents, Gayle and Bettye Shockley, and his sister, Brandi Williams.

In addition to competing on The X Factor, he also competed on The Voice, America’s Got Talent, and The Winner Is over the years.

On Saturday, November 27, Wells spoke to E! News about the loss of her husband in a deeply-personal interview.

“It was a work-related accident,” she explained. “It caused him to have no oxygen in his brain, which caused his body to kind of fail.”

It’s understood a part of Mr Wells’ body was caught in a machine at a tyre manufacturing plant, according to TMZ.

Wells said that she knows that her husband would want his music “to go on” above all.

“I want to focus on his music, his love of family and God. He loved America. He was a true patriot,” she said.

“I mean, he, he was just an awesome, unique person. And, you know, he was my best friend, my first boyfriend ever… We’ve been together for 17 years and I think the only time we were ever apart was when he went to do The X Factor.”

Denial of responsibility! Verve Times is an automatic aggregator of the all world’s media. In each content, the hyperlink to the primary source is specified. All trademarks belong to their rightful owners, all materials to their authors. If you are the owner of the content and do not want us to publish your materials, please contact us by email – admin@vervetimes.com. The content will be deleted within 24 hours.
NewsWorld News
0
Share FacebookTwitterGoogle+ReddItWhatsAppPinterestEmail