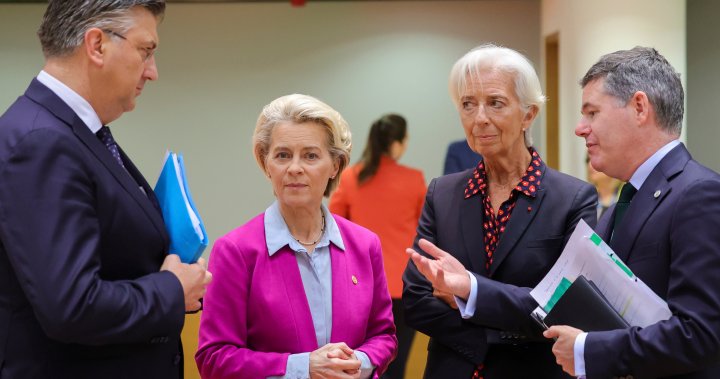 EU leaders will on Friday discuss how to respond to soaring energy prices and the threat of a total cut-off of Russian gas, accusing Moscow of “weaponising” energy via a supply squeeze that Germany warned could partly shut down its industry this winter.

A day after celebrations over setting Kyiv on the road to membership of the bloc, Friday’s summit in Brussels was set to be a sober reflection on the economic impact of Russia’s invasion of Ukraine.

Leaders of the 27 European Union nations will, according to a draft summit statement seen by Reuters, place the blame for a huge spike in prices and sagging global growth on the war that began exactly four months ago.

Following unprecedented Western sanctions imposed over the invasion, a dozen European countries have so far been thumped by cuts in gas flows from Russia.

“It is only a matter of time before the Russians close down all gas shipments,” said one EU official ahead of Friday’s talks.

German Economy Minister Robert Habeck warned his country was heading for a gas shortage if Russian supplies remained as low as currently, and some industries would have to be shut down come the winter.

“Companies would have to stop production, lay off their workers, supply chains would collapse, people would go into debt to pay their heating bills,” he told Der Spiegel magazine, adding it was part of Russian President Vladimir Putin’s strategy to divide the country.

The EU relied on Russia for as much as 40% of its gas needs before the war – rising to 55% for Germany – leaving a huge gap to fill in an already tight global gas market.

According to a draft statement seen by Reuters, EU leaders will say that “in the face of the weaponisation of gas by Russia,” the European Commission should find ways to secure “supply at affordable prices.”

But that adds up to hefty bills for already stretched coffers, leaving many scrambling to find a solution, and EU countries disagree on a bloc-wide solution to address soaring prices.

Spain and Portugal capped gas prices in their local electricity market this month, but other states warn price caps would disrupt energy markets and drain state coffers further, if governments had to pay the difference between the capped price and the price in international gas markets.

“We need to start buying energy collectively, we need to implement price caps and we need to make plans together to get through the winter,” Belgian Prime Minister Alexander De Croo said on Friday as he arrived at the EU summit.

“If we don’t pay attention then the whole EU economy will go into a recession with all its consequences.”

The bloc responded to the war with uncharacteristic speed and unity, but some sanctions, such as a planned embargo on Russian oil imports, have repercussions for its economies.

Inflation in the 19 countries sharing the euro currency has shot to all-time highs above 8% and the EU’s executive expects economic growth to dip to 2.7% this year.

Eurogroup chief Paschal Donohoe warned that the bloc must “acknowledge the risk we could face if inflation becomes embedded in our economies.”

“If inflation becomes a real, durable part of our economies in the years to come, the challenge that we face with the standard of living and the cost of living will only grow in the years ahead. It’s a very difficult challenge.”

Rome has called for EU leaders to reconvene for an exceptional mid-July meeting to discuss ways to deal with rising gas prices but there is no plan to do so at the moment, an EU official said.

Another EU official, however, said some EU leaders were considering the option to hold an extra summit in July to talk about broader economic issues.

Denial of responsibility! Verve Times is an automatic aggregator of the all world’s media. In each content, the hyperlink to the primary source is specified. All trademarks belong to their rightful owners, all materials to their authors. If you are the owner of the content and do not want us to publish your materials, please contact us by email – [email protected]. The content will be deleted within 24 hours.
Economyenergy pricesEUEU leaders meetingEU meetingEU summit Brusselseuropean uniongas prices
0
Share FacebookTwitterGoogle+ReddItWhatsAppPinterestEmail

Rodriguez exchanges gear with Judge, promises to meet in…

Alyssa Wong and Martin Coccolo to launch a new DEADPOOL…

Travel costs fell in July. Here’s how you can score a good…