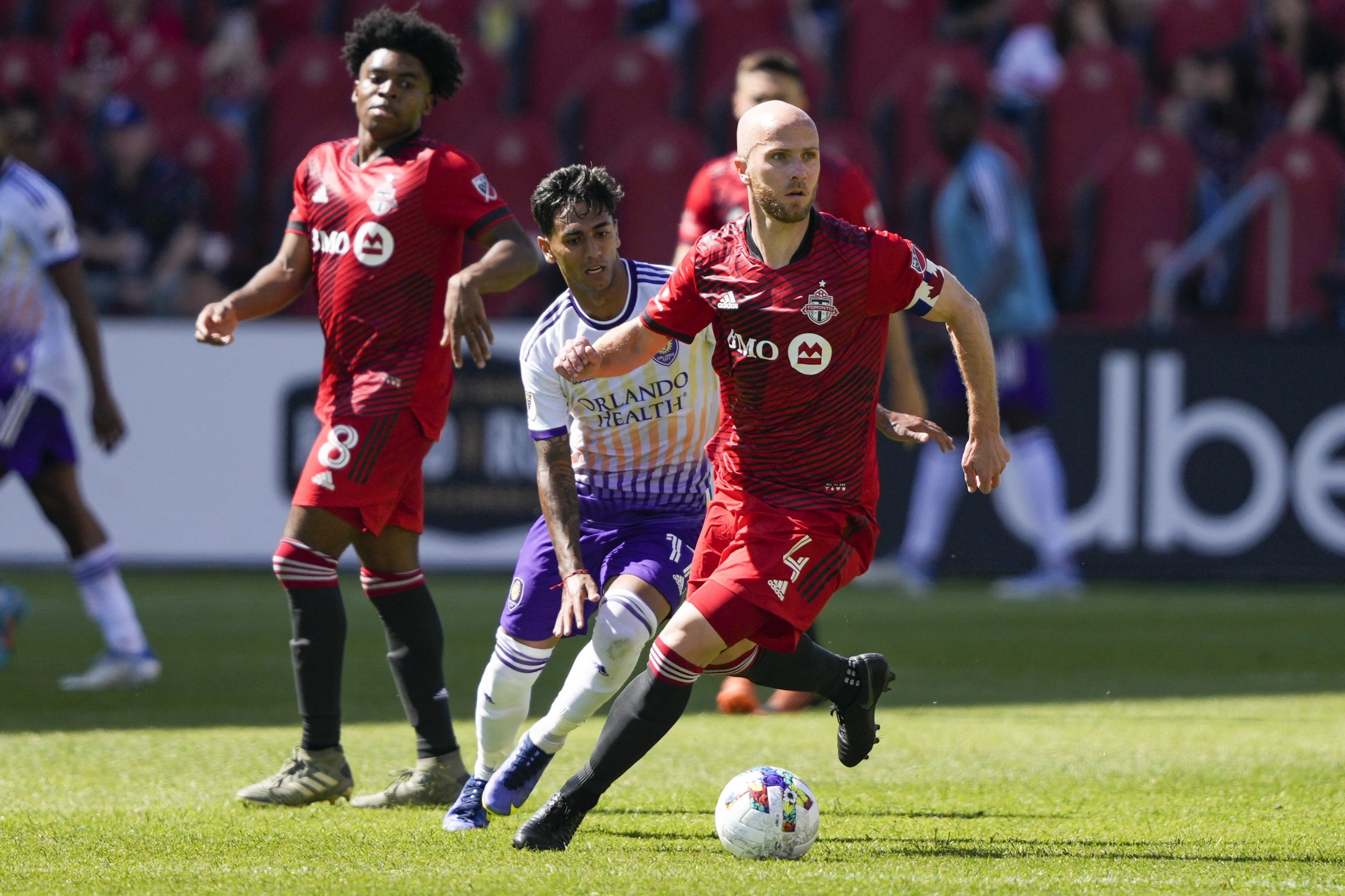 Toronto FC goalkeeper Alex Bono limped into the interview room following Saturday’s 1-0 loss to Orlando City at BMO Field, his legs taped up with ice. But it was his spirit that hurt the most.

For the second straight week, TFC gave up a goal in added time to lose 1-0. Last week, it was a late goal by Vancouver’s Tosaint Ricketts that sunk the Reds. This week, Orlando defender Kyle Smith came off the bench to score via header off a corner kick by teammate Alexandre Pato two minutes into added time, stunning the 26,146 spectators at BMO, who started to boo after the Orlando goal sunk in.

The loss was the fifth in a row for the struggling Reds, a team that has been playing with a depleted lineup for most of the year. Toronto has three wins, seven losses and two draws on the season.

“It hurts,” Bono said. “That’s definitely painful. We work the whole 90 minutes and it comes down to one play and we just don’t quite execute. We got to get back on that horse.”

Toronto coach Bob Bradley was forced to start a very young lineup yet again as TFC was missing a number of key veterans, including the team’s top attacker, Alejandro Pozuelo, and veteran midfielder Jonathan Osorio.

Despite that, the youthful starting XI played well against Orlando and probably deserved a better fate than yet another 1-0 loss.

“It’ frustrating, obviously,” Bono said. “As a group we have an expectation to be a team that’s difficult to score against.”

That hasn’t been the case for a while. The most recent time TFC recorded a clean sheet was Sept. 25, 2021, in a 0-0 draw against the Colorado Rapids.

Bono played well against Orlando and made some good saves. But, again, another loss, another missed shutout.

“Two games in a row where we’ve had legitimate chances to have shutouts … yeah, it keeps me up at night,” the veteran ’keeper said. “It really weighs on me that we give up goals the way we do sometimes. I live on shut-outs, so the fact that we haven’t had one in a while is slowly killing me.

The TFC roster situation is a continuing problem. On Saturday, the club got centre back Carlos Salcedo back from the COVID health and safety protocol list.

At the same time, Pozuelo was dropped from the lineup. Bradley said at the end of the training this week, the 2020 MLS MVP felt a little something in his lower leg.

“It doesn’t seem to be very bad, but it was enough to keep him out,” the coach said.

Nelson was a buzz-saw for TFC, breaking up plays on defence and creating a number of decent attacks for Toronto.

“This is part of the deal,” Bradley said when asked, again, about the depleted lineup. “Anybody that becomes a really good pro knows that in certain moments, man, you get kicked to the ground. And then you get up and you’re stronger and you learn. The job as coaches is to continue to find the right ways to keep them going, keep them alive, keep them engaged.

Orlando held the edge in play statistically, though it was a even game overall. TFC had a couple of decent opportunities to take the lead late in the second half, but couldn’t finish.

“Lately, we can’t really find a way to get ourselves a break,” Bradley said. “And, man, right now everybody feels it. Everyone of us.”

Orlando came close to scoring in the 27th minute when Júnior Urso right-footed a shot from very close range just over the goal. Bono kept it 0-0 late in the first half when he made a huge leaping save on a free kick taken by Orlando’s Mauricio Pereyra from about 10 yards above the box that was heading into the top right corner of the goal.

About a minute after that, TFC captain Michael Bradley fed Kosi Thompson with a nice pass in front of the goal but Thompson couldn’t get a shot away.

Orlando ’keeper Pedro Gallese was forced to make a good save on a Kerr right-footed blast from outside the box to open up the second half. In the 67th minute, Kerr had another good chance, picking up a feed from Jimenez inside the box and left-footing a shot at goal, only to have the ball deflected.

Forward Ayo Akinola just returned to the Toronto lineup a couple of weeks ago after undergoing knee surgery last summer and he had a few chances after coming on in the second half, though his timing still seems just off.

With five straight losses, the TFC fan base is starting to become a little restless.

“Stick with us,” Bob Bradley said. “We said from the beginning that in the early part of the season these young guys were going to be on the field. We know the results, we’re honest, but I also think people can see things there that are positive going forward.”

TFC’s next game is Saturday, May 21, at Audi Field against DC United.