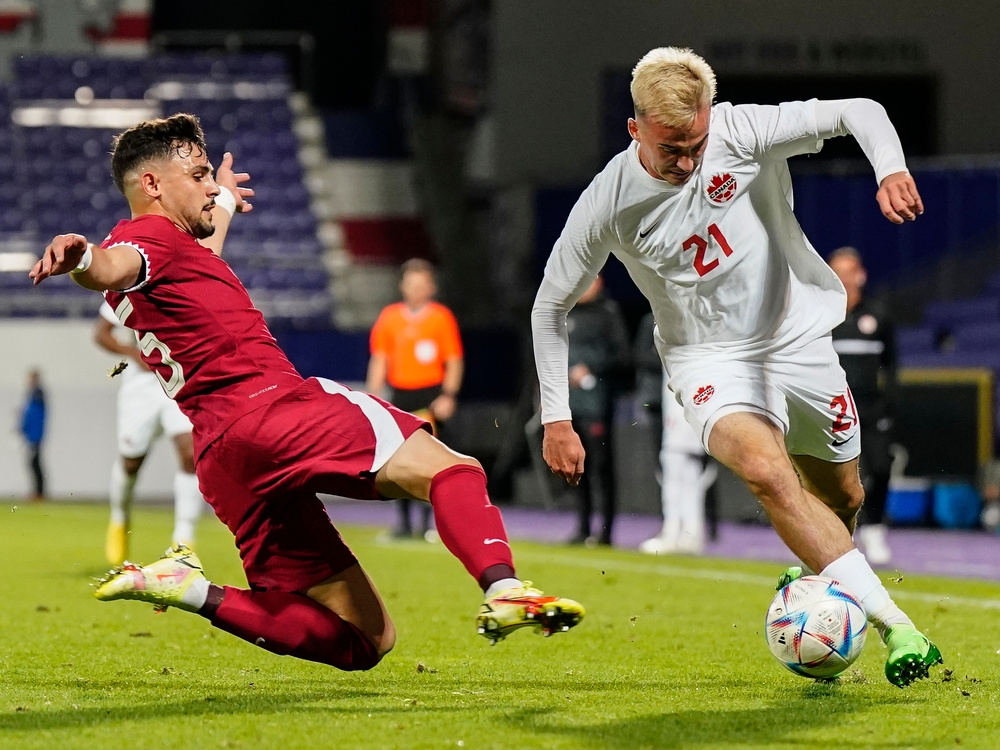 The morning after a convincing win against Qatar in its penultimate exhibition game before the squad is named for the 2022 FIFA World Cup, Canada put in a full training session at the impressive MOL Football Academy east of Bratislava, Slovakia on Saturday.

Head coach John Herdman liked what he saw in the 2-0 victory over the World Cup hosts in Vienna, Austria, on Friday, but knows his side is moving up a weight class facing Uruguay on Tuesday (noon ET, OneSoccer) at the Stadion Tehelne pole in Bratislava.

Canada had a lengthy training session on a day usually reserved for rest and recovery. But with just two months left before competing in its first men’s World Cup since 1986, there is little time to relax for Herdman and his players.

Herdman has some tough decisions to make as Canada can only take 26 players to Qatar of the nearly 40 used during World Cup qualifying.

“They’re all excited and they all have been dreaming about this moment,” Herdman said. “This is the toughest part of a coach, because you know there’s guys that aren’t going to make it. You’ve seen I’ve been loyal to players through these four years; there’s guys that have given everything to this team and flown long hours and gone places where maybe other players wouldn’t have wanted to go to.

“I’ll always be loyal to players; I think that’s right at the core of what this brotherhood is. But at the same time, you have to earn it, and guys that played on the pitch (Friday) they earned that, whether it be at training or with their club performance or the earning of battling for four years with this team.”

It has been a long journey for Canada to get to this point and the ride has not been smooth. Canada had to take an arduous qualifying route, ranked outside the top six teams in Concacaf.

The braintrust at Concacaf decided to make the road to Qatar as simple as possible for the United States and Mexico and threw Canada under the bus by making it play in two preliminary qualifying rounds under the guise of a ranking system.

Had the original qualifying format stayed in place, Canada’s only hope of qualifying would have been through the intercontinental playoff. The COVID-19 pandemic, however, forced Concacaf to alter its unbalanced system, giving every team in the region a fair chance to play its way to Qatar.

Canada played more qualifying games than any other team in the world on its way to topping the final Concacaf qualifying group ahead of Mexico and the United States.

Now, for all the hard work, the difficult travel schedule, which included a trip to Haiti in the middle of the pandemic, the reward is being able to represent Canada at the World Cup. Unfortunately, there isn’t enough room on the World Cup roster for everyone who helped Canada get there.

“I have big decisions to make, I know that,” Herdman said. “It’s not going to be easy, but I’ll be loyal to guys, as well as make sure people have earned the right to be there.”

A good test of whether players will be able to cut it on the biggest stage in sports will be the game against Uruguay.

The two-time World Cup champions and 15-time South American champions are not the dominant team they once were, but can still swing with the heavyweights of the world.

Uruguay was upset 1-0 in a friendly against Iran in Sankt Polten, Austria on Friday, so will be motivated to put in a good showing against Canada.

The game will be the last for both teams before the World Cup break in the European club schedule. Canada will have one final tuneup against Japan on Nov. 17 in Dubai, UAE, before opening the tournament on Nov. 23 against Belgium in Al Rayyan, Qatar.

“We all know Uruguay is a different test, it’s the one we’ve been all really excited for,” Herdman said. “This is the one, where as a player, internationally, these are the games you’re thinking about, you’re dreaming about.

“We’ve been playing Concacaf consistently and constantly getting the question from the players, when we’re going to get an international friendly against one of these top teams? And now we’ve got it.”

The game should give Canada a good indication of where it stands heading into the World Cup, where Belgium, Croatia and Morocco await.

As fortune would have it, Croatia is playing Austria in a UEFA Nations League game Sunday in Vienna, where Herdman and his coaching staff can get an in-person look at the 2018 World Cup finalists.

“I think we’re coming in as the genuine underdog, it’s been a while,” Herdman said. “Even going through qualification, after some performance against teams like Mexico and the US, people were starting to talk about Canada no longer being an underdog.

“I think coming into this game we can start to really embrace that mentality. For us it’s like a Cup final, a genuine Cup final and I think you’ll see that spirit. There are things that will only be revealed in that game, things we won’t know until we actually experience it about the quality of our team, the quality of our tactics. We’re excited.”

Kate Middleton or Catherine? How the name of Princess of Wales changed after the Queen’s death