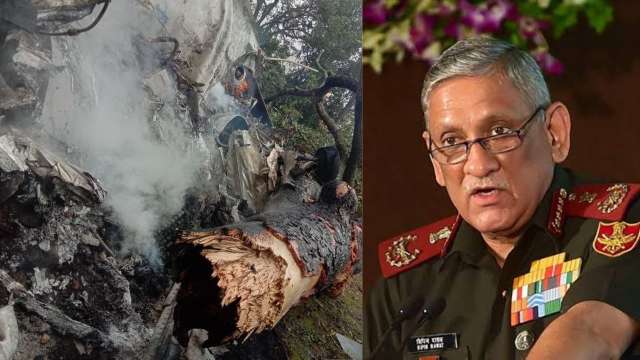 Gen Rawat, India’s first CDS was on a visit to the Defence Services Staff College in Wellington to address the faculty and student officers of the Staff Course when his chopper crashed near Coonor in the Nilgiris district. Gen Rawat had taken off from Sulur Airbase for Wellington and was accompanied by his wife Madhulika Rawat, his DA Brigadier LS Lidder, SO Lieutenant Colonel Harjinder Singh, among other defence officials.

The Indian Air Force has said that out of the 14 people on board, 13 have died. “With deep regret, it has now been ascertained that Gen Bipin Rawat, Mrs Madhulika Rawat and 11 other persons on board have died in the unfortunate accident,” tweeted IAF.

Here is the timeline of the helicopter crash that claimed the life of CDS Gen Bipin Rawat and his wife Madhulika Rawat, among others.

9 am: CDS Gen Bipin Rawat, wife Madhulika and other senior military officials leave for Tamil Nadu’s Coimbatore from Delhi in a special aircraft.

11.47 am: A total of 14 people, including Gen Rawat and his wife Madhulika Rawat board an Indian Air Force (IAF) Mi-17V5 helicopter. The chopper takes off for Defence Staff College in Wellington where Gen Rawat was expected to attend an event.

12.20 am: The chopper crashes near Coonoor, around 10 kilometres ahead of the destination.

12.25 am: Locals rush to the crash site and alert district police and authorities.

1.53 pm: IAF confirms that the IAF Mi-17V5 helicopter that crashed near Coonoor had CDS Gen Bipin Rawat on board.

6.03 pm: The IAF confirms that CDS Rawat is among the 13 passengers confirmed dead in the crash.

A veteran of counterinsurgency warfare, CDS Rawat served in the most difficult terrains including northern and eastern commands.

CDS Rawat was commissioned into the Indian Army in December 1978. He previously served as Chief of the Army Staff from January 2017 to December 2019.

Denial of responsibility! Verve Times is an automatic aggregator of the all world’s media. In each content, the hyperlink to the primary source is specified. All trademarks belong to their rightful owners, all materials to their authors. If you are the owner of the content and do not want us to publish your materials, please contact us by email – [email protected]. The content will be deleted within 24 hours.
bipin rawatBipin Rawat deathCDS Bipin RawatCDS Bipin Rawat deathHelicopter crashMadhulika RawatTamil Nadu helicopter crash
0
Share FacebookTwitterGoogle+ReddItWhatsAppPinterestEmail