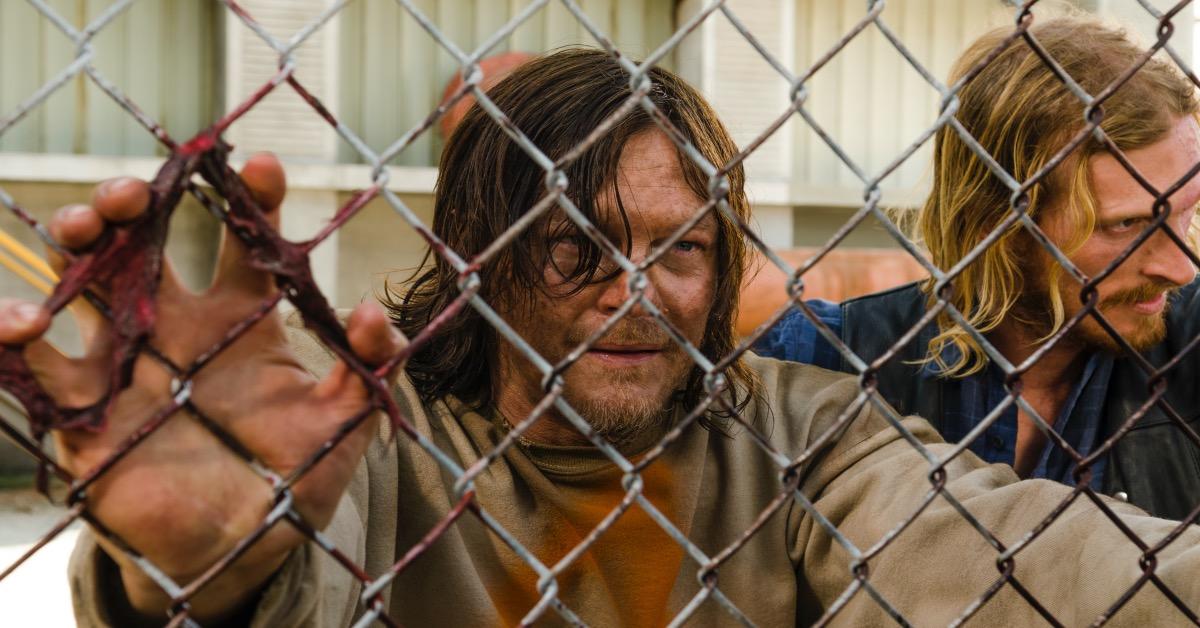 Daryl (Norman Reedus) was on “Easy Street” when “The Cell” episode of The Walking Dead aired on November 6, 2016. “We’re on easy street, and it feels so sweet, ’cause the world is but a treat when you’re on easy street,” goes the upbeat torture tune inflicted on Daryl, held hostage by Negan (Jeffrey Dean Morgan) as a prisoner of the Sanctuary in Season 7 Episode 3, “The Cell.” The Saviors’ use of music made “Easy Street” by The Collapsable Hearts Club a top track on Billboard’s Digital Songs chart (No. 50), selling 21,000 downloads in its first month after appearing on The Walking Dead.

But Reedus, whose caged character is stripped down and forced to eat dog food sandwiches as he hears “Easy Street” on repeat, is no fan of the song that plays about seven times throughout “The Cell.”

“You know, I didn’t hear that song until the episode came out. We didn’t hear that song while we were filming. We were just imagining a song,” Reedus later told The Independent. “Then in the script, it was like a kids song, and that’s what I expected it to be and then that ‘Easy Street’ came on and I was like, ‘God this song sucks.'”

Songwriter Jim Bianco was “honored” to have the song used in the hit AMC zombie drama, but admitted to ComicBook: “Even I hated the song for a minute!”

“I knew the moment The Walking Dead requested our song ‘Easy Street’ it would be used with some irony. With such an upbeat, obnoxiously pop-y hook and positive lyrics, there’s no way to sync it with a zombie apocalypse without sarcasm and satire,” Bianco told ComicBook after “The Cell” turned the catchy song into a torture tactic. “So we were expecting that. And overall, we felt honored to be a part of such clever use of music in such a cool show. But I have to say when ‘Easy Street’ came on and Daryl, the biggest badass on TV, was laying there being tortured and eating dog food sandwiches, even I hated the song for a minute!”

According to music supervisor Gabe Hilfer, then-showrunner Scott Gimple wanted “to play the juxtaposition of a very happy, feel-good, child-like song over and over in a torture-like manner.”

“It can get tricky finding a song which fits the desired aesthetic while making sure the songwriter and performer are okay with the content of the scene,” Hilfer said. “After searching long and hard, we came across ‘Easy Street,’ and it fit the bill perfectly. Once Scott heard it, he agreed, and the rest is history!”

“Easy Street” was considered for similar use in a Season 6 episode of Fear the Walking Dead. Dwight (Austin Amelio), a former Negan lieutenant who crossed over to the spin-off to find ex-Savior wife Sherry (Christine Evangelista), blasts music when interrogating a Ranger for intel on villain Virginia (Colby Minifie).

Instead of “Easy Street,” Dwight’s song of choice on The Walking Dead, the Fear showrunners ultimately decided on the David Wilkins song “Yesterday, Tomorrow and Today,” considering it “the cousin of ‘Easy Street.'”

Season 11 of The Walking Dead returns with new episodes February 20 on AMC. Follow the author @CameronBonomolo on Twitter for all things TWD and stay tuned to ComicBook for coverage all season long.

Denial of responsibility! Verve Times is an automatic aggregator of the all world’s media. In each content, the hyperlink to the primary source is specified. All trademarks belong to their rightful owners, all materials to their authors. If you are the owner of the content and do not want us to publish your materials, please contact us by email – admin@vervetimes.com. The content will be deleted within 24 hours.
Daryl DixonNegan (Walking Dead)Norman ReedusThe CellThe Walking Dead
0
Share FacebookTwitterGoogle+ReddItWhatsAppPinterestEmail