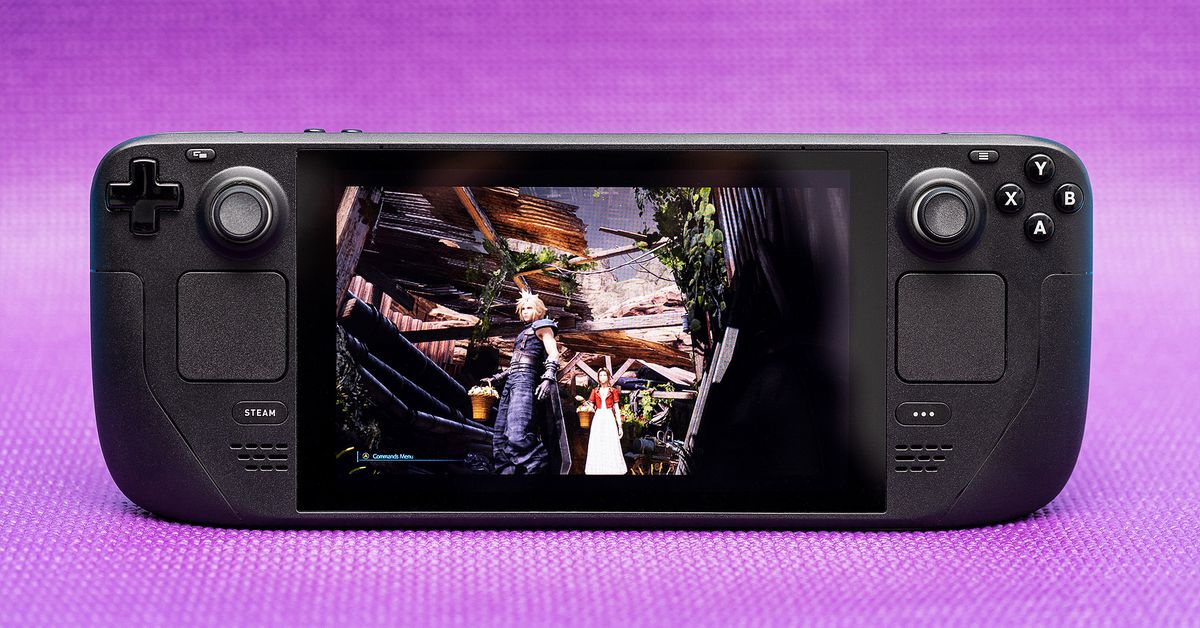 The Steam Deck’s best button is its software

The Steam Deck has a lot of buttons. There’s a D-pad, all the typical face buttons, two control sticks that also respond to capacitive touch and can be pushed down like buttons, two trackpads with haptic feedback that are also pressure-sensitive buttons, two shoulder bumpers, two analog shoulder triggers, and four buttons on the back of the device behind the grips.

Somehow, they all feel like they’re exactly in the right place while you’re holding the device, and in writing the latest in our long-running Button of the Month series, you might think that I’d wax poetic about just one of them. But for me, the true magic of the Steam Deck is that any button can be the awesome button, thanks to the device’s excellent software.

During a battle, I usually keep my right thumb glued on the shooting button (on the Steam Deck, X) while using another part of my thumb to press jump (A). But when every split second counts, I found I was reluctant to lift my thumb even a moment to press the dash or special shot buttons. That infinitesimal break could mean the difference between surviving another barrage or dying and having to start a fight all the way from the beginning. With just a couple tweaks and 30 seconds in the Steam Deck’s menus, though, I changed the controls so I could jump, dash, and fire off special shots without ever having to lift my thumb.

I could have remapped the special attack just about anywhere on the Steam Deck, but I chose one of the four unusual buttons on the back of the console, which fall almost exactly under my third and fourth fingers when I grip the device. As buttons, I actually don’t think they’re fun to use. They’re quite shallow. But I also think it’s a good thing that the buttons require a deliberate press to click through. That makes them great for actions you don’t want to do on accident — like, say, Cuphead’s special shots, which can turn the tide of a battle but take some time to charge up to full power.

I also turned the R2 trigger into a parry button and mapped the L2 trigger to the new dodge roll combo for Ms. Chalice, the new character introduced in the DLC. The roll typically requires pressing down and the Y button at the same time, and I had a lot of trouble nailing it during the Delicious Last Course’s hectic boss fights. Putting the combo on L2 made the roll a lot easier to use.

Using shoulder triggers for movement actions so that you can keep your thumbs on the control sticks is a technique I learned after scouting better custom layouts for Returnal on PS5, and it made a big difference in Cuphead, too. And I made the L4 back button into an instant screenshot button so I could snap pics of Delicious Last Course’s devious boss designs. (One later boss is honestly nightmare fuel.)

I haven’t just messed with buttons. In Vampire Survivors, I have the right stick mirror the left so that I can switch between them. (I am making the game think that I have two left analog sticks.) The game generally requires you to constantly push the control stick for upwards of 30 minutes to survive against hordes of baddies, so being able to switch sticks helps my left hand from getting tired.

And you don’t have to come up with these ideas yourself: if you want to look through other peoples’ ideas for control schemes, you can browse them right from a game’s menu in SteamOS, meaning you don’t have to go digging through Reddit like I did for Returnal.

The Steam Deck’s incredible customizability and easy access to alternative controls opens up a more philosophical question: who should decide what a button does? In most video games, that’s largely out of your hands (pun intended). But with the Steam Deck, you can do all sorts of wild things that push how we might traditionally think a certain button should be used.

In Half-Life 2, for example, there’s a wild layout that lets you touch the top of the right control stick to turn on gyro aiming, tilting the system to move your reticle with far more accuracy than a joystick alone. That’s something you can turn on for any game with a few taps on the Deck. You could even theoretically make low-lift multiplayer couch games work on a single Deck by setting half the Deck to replicate a mouse and keyboard and the other half to use gamepad controls.

Who should decide what a button does?

It helps that it takes just a few button presses to get to the menu that lets you change any button you want. You can use that menu to choose what any button does for any game in your Steam library, and it’ll automatically remember what you set for each game. And since every Steam Deck comes with the same set of buttons, you won’t need to buy things like an additional controller or a separate accessory to mess around with less common input options like back buttons. The Steam Deck truly lets you decide how you want to play a game, and that flexibility is quickly making it one of my favorite gadgets ever.

As more people get their hands on the Steam Deck, I can’t wait to see how others think of new and creative ways to customize controls for my favorite games. For now, I’ll keep using my own controls for specials in Cuphead — and I’ll try to grab a screenshot after I finally beat the awful dragon boss.

Roe v. Wade overturning: How it could affect IVFs