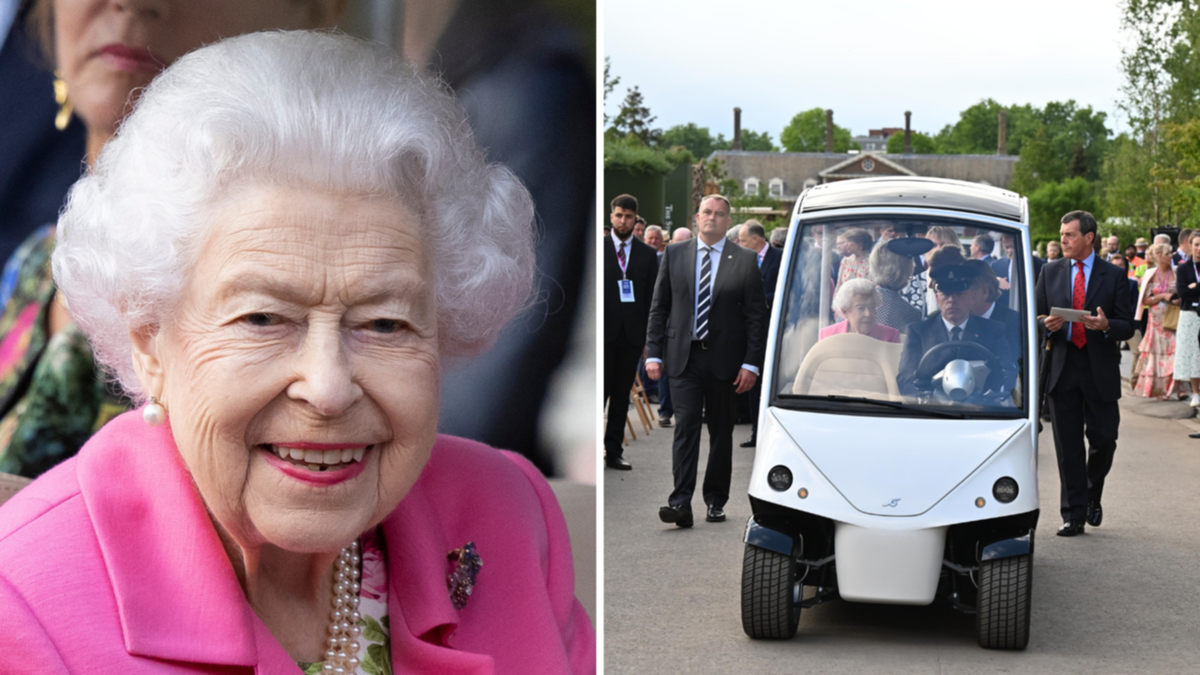 Dubbed the ‘Queen-mobile,’ the electric vehicle was recently acquired by the royal household to help the 96-year-old get around despite her mobility issues.

The white cart, estimated to be worth more than AUD $100,000, is decked out with leather seats, Bluetooth speakers, screens, a fridge and all-weather covers.

“Adjustments have been made for the Queen’s comfort,” a Buckingham Palace spokesperson said of the cart.

Her Majesty was all smiles as she was zipped around the Flower Show by a chauffeur while wearing a bright fuchsia pink outfit on Monday.

It was unknown whether the monarch would attend the world-famous annual event, which she has been to more than 50 times in her 70-year reign as patron of the Royal Horticultural Society.

It’s not the first time Her Majesty has used a buggy during an engagement.

The Queen was last seen in a golf buggy nine years ago in 2013 during the Coronation Festival in the gardens of Buckingham Palace.

She also used one during a royal visit to Australia in 2011, when she used one at Government House in Canberra.

It comes as the United Kingdom counts down to four days of official celebrations to mark the Queen’s Platinum Jubilee starting on June 2.

Planned events include Trooping the Colour, a church service at St Paul’s Cathedral, the Epsom Derby, a concert outside Buckingham Palace and a pageant through London.

There are concerns the monarch may need to miss some events however due to her health.

She been forced to pull out of several engagements in recent months following a number of issues including a battle with COVID-19 and “mobility issues.”

The palace has confirmed Her Majesty is likely to decide on the day whether she will attend each event.

“The Queen is looking forward to the weekend and will be taking part in the celebrations, but her presence will not be confirmed until much nearer the time or even on the day itself,” a spokesperson said.

Denial of responsibility! Verve Times is an automatic aggregator of the all world’s media. In each content, the hyperlink to the primary source is specified. All trademarks belong to their rightful owners, all materials to their authors. If you are the owner of the content and do not want us to publish your materials, please contact us by email – [email protected]. The content will be deleted within 24 hours.
EntertainmentEntertainment - SunriseOn The ShowQueen Elizabeth IIRoyal Family
0
Share FacebookTwitterGoogle+ReddItWhatsAppPinterestEmail

Jared Bednar disagrees with call that set up Lightning goal