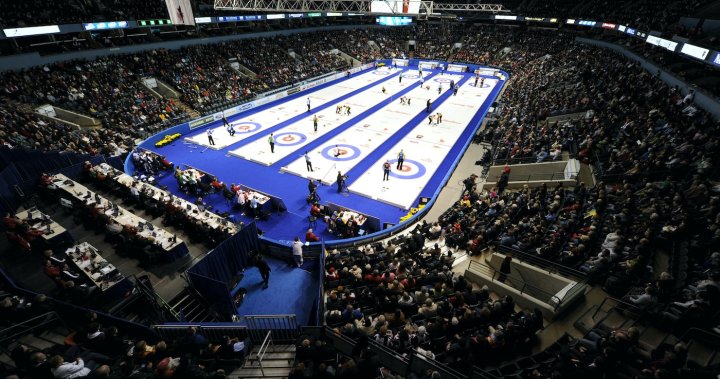 The Brier returning to London, Ont. in 2023: Curling Canada

For the first time in more than a decade, London, Ont., will host the Tim Hortons Brier.

Officials with Curling Canada announced on Monday that the annual Canadian men’s curling championship will return to the Forest City in 2023.

The multi-day event will be played from Mar. 3 to Mar. 12 at Budweiser Gardens.

The downtown London arena hosted the Brier in 2011, when it was named the John Labatt Centre. London first hosted in 1974 when the Brier was held in London Gardens, the southend arena later named the London Ice House, prior to its closure in 2002.

During a virtual media conference Monday morning, Curling Canada CEO Katherine Henderson said selecting a host for the 2023 event was made “a much easier decision” due to London’s “outstanding” bid for the job.

“It’s a fabulous city, they knock it out of the park every time they host a sporting event,” Henderson said said.

The COVID-19 pandemic has sidelined countless opportunities for in-person sporting events, with Ontario’s latest restrictions leaving fans unable to attend games for most of January. Come 2023, Henderson says Curling Canada is planning for a “full Brier.”

“We always take advice from public health, we always play the game as safely as we possible can, but at this point, with Canada’s commitment to public health, our vaccine rates and what we are seeing right now with peaking numbers, we are quite confident that coming to London we’re going to have a really terrific time,” Henderson added.

“The plan at this point is that we want to be partying in that patch, together.”

Canadian Curling Hall of Famer Peter Inch played a pivotal role in sweeping London to another shot at hosting the Brier.

“We’ve been working on this bid since 2012. We’ve been talking about it and determining when the best year would be to have it and how we could make it all work out,” Inch said.

“The Continental Cups (in 2018 and 2020) were a couple of what I call ‘steps’ that we had to take before we felt confident of putting that bid forward again.”

Tourism London also lent support for the city’s bid. Its director of sport tourism Zanth Jarvis says the Brier will bring some much needed business, given the financial toll of the pandemic.

“Just alone, for the participants in Curling Canada, that’s 2,200 hotel rooms right there. We’re looking at a projected economic impact between $8-million to $10-million,” Jarvis said.

“This one event won’t be all of the recovery, it’s going to take a while, but it’s certainly a step in the right direction.”

Tickets, including full event packages, are expected to go on sale in the coming weeks, according to Curling Canada.

The organization says volunteer opportunities will also be available later this year and those interested are invited to check out Curling Canada’s volunteer webpage to sign up for receive updates on volunteering at the 2023 Brier.

Denial of responsibility! Verve Times is an automatic aggregator of the all world’s media. In each content, the hyperlink to the primary source is specified. All trademarks belong to their rightful owners, all materials to their authors. If you are the owner of the content and do not want us to publish your materials, please contact us by email – [email protected]. The content will be deleted within 24 hours.
BrierBrier CupBudweiser GardensCanadian curling championshipCurlingCurling CanadaLondonMen's curling
0
Share FacebookTwitterGoogle+ReddItWhatsAppPinterestEmail

Even after James Webb Space Telescope launch, astronomers still on the edge of their seats

‘As The World Turns’ star Marnie Schulenburg has…