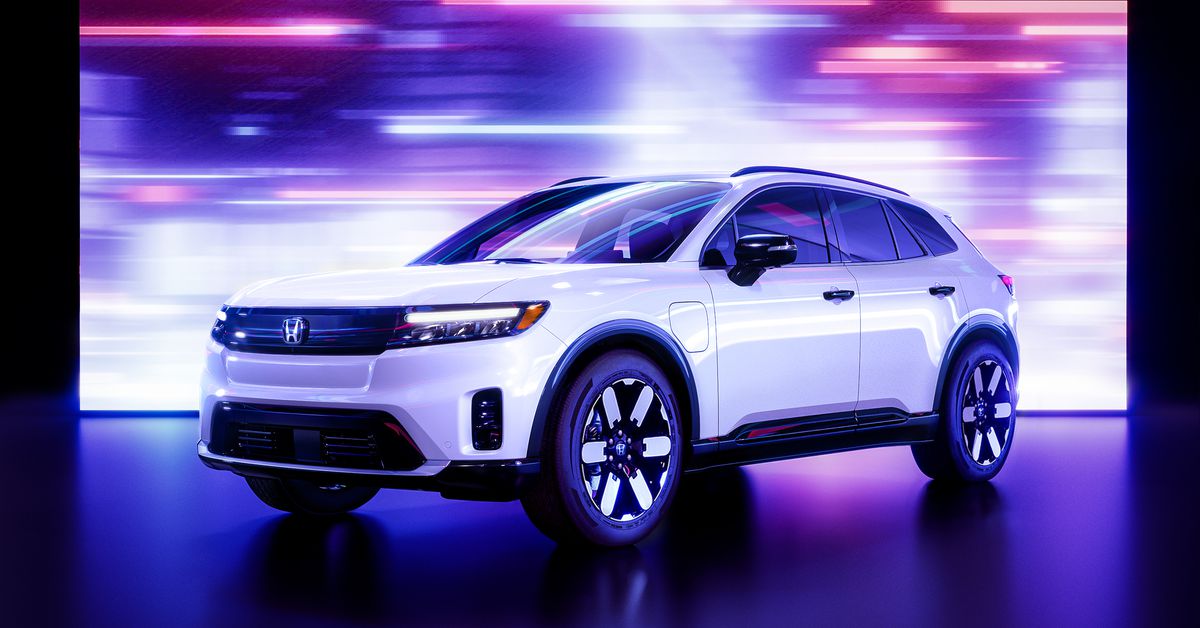 Honda released new details about the upcoming Prologue electric SUV, including sizing (bigger than a CR-V) and styling (neo-rugged?), as the automaker inches closer to the full reveal.

The 2024 Prologue will slot in between the compact CR-V and the midsize Passport SUV. It will be about eight inches longer and about five inches wider than the current CR-V. That means more cabin space and cargo room, which will be crucial if Honda is to win the increasingly competitive electric midsize SUV segment.

Perched on 21-inch wheels, the Prologue will have a riding height closer to the Passport. The exact dimensions are as follows: 121.8-inch wheelbase; 192-inch length; 78.3 inches wide; and 64.7 inches tall.

Inside, the infotainment stack will be anchored in an 11.3-inch center touchscreen, alongside an 11-inch instrument cluster. Top trims will feature leather seats and a large panoramic moonroof. Outside, the front end was designed to pay homage to the Honda e, the automaker’s cute, boxy city car that’s only available in Europe and Asia. And the rear features a new spin on the Honda logo.

But the vast majority of key specs, like battery capacity, range, and most importantly, price are still being kept under wraps. Gary Robinson, Honda’s vice president of product planning, said the Prologue will be comparable to the Passport, both in terms of size and price. (The 2022 Passport starts at around $38,000.)

The Prologue was designed at the Honda Advanced Design Studio in Los Angeles in collaboration with a design team in Japan. The automaker’s marketing team came up with the concept of “neo-rugged” to describe the EV’s vibe of being both roomy enough for off-road adventures and compact enough for city driving.

Comparing the Prologue to the CR-V is no accident. Honda wants its customers to draw a direct line between its lineup of affordable compact SUVs, like the hybrid CR-V, to the upcoming Prologue. Honda thinks its hybrids will be a gateway to its pure battery-electric vehicles for most of its customers.

“That progression from CR-V to Prologue is a key step in our electrification strategy,” Robinson said. Honda plans on offering favorable, shorter-term two-year leases for its hybrid CR-V customers in order to sweeten the deal.

Of course, none of this is new. Honda has been tooting its hybrid horn for years now, even going so far as to tout fuel-cell vehicles like the discontinued Clarity. While some automakers are eschewing hybrids in favor of a BEV-only strategy, Honda is hedging its bets. It’s also buying itself some more time to develop its own EV architecture, the Honda e platform, which it plans on rolling out in 2026.

With raids and show-cause notice, govt plans mega crackdown on cough syrup maker under WHO lens over Gambia deaths