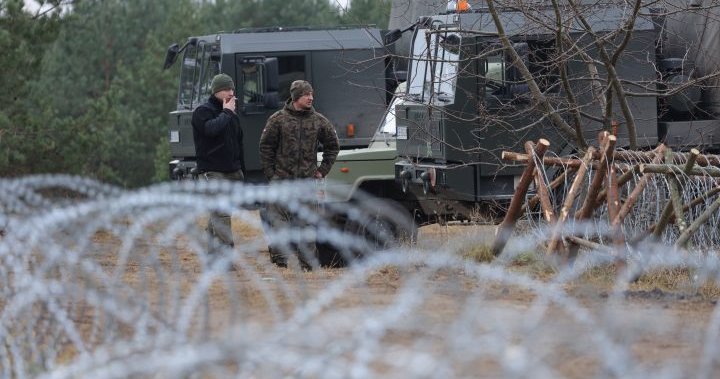 Polish police said Saturday that the body of a young Syrian man was found in the woods near the border with Belarus, the latest victim in a political standoff at the European Union’s eastern border.

The regime in Minsk has for months been encouraging illegal migration across its border into the EU nations of Poland, Lithuania and Latvia. All three countries are reinforcing their frontiers, seeking to block the newly opened migration route, and the situation is growing more dangerous as winter approaches.

Read more:
What’s behind the migrant crisis at the Belarus-Poland border, and what happens next?

Polish police said the body of a Syrian man about 20 years old was found a day earlier near the village of Wolka Terechowska. They said the exact cause of death could not be determined and that an autopsy would be performed.

It brings the death toll now to at least nine reported victims in the migration encouraged by Belarus’ longtime President Alexander Lukashenko.

Many of the migrants are from Syria, Iraq, or elsewhere in the Middle East, people seeking to flee conflict and hopelessness for the prospect of better lives in Europe.

The crisis is creating another point of tension between the West and Belarus, and by extension with its closest ally: Russia.

Though Russia this week sent nuclear-capable strategic bombers and paratroopers to patrol over Belarus in a show of support, Russian President Vladimir Putin denied allegations of being involved in creating the flow of migrants to Europe.

“I want everyone to know that we have nothing to do with it. Everyone is trying to impose any responsibility on us for any reason and for no reason at all,” Putin said in excerpts released Saturday of an interview with state television that is to be broadcast in full on Sunday.

He said that no Russian aviation companies carry the migrants to Belarus, and also lashed out at the West as a root cause for the crisis, with military operations in Iraq and elsewhere that have led to continued conflict in the region.

“Is it Belarus that pioneered these problems, or what? No, these are causes that were created by the Western countries themselves, including European countries,” Putin said.

A large number of migrants are in a makeshift camp on the Belarusian side of the border in frigid conditions. Polish authorities report daily new attempts by the migrants to breach the border.

The situation shows no signs of ending soon. Belarusian state news agency Belta reported that Lukashenko on Saturday ordered the military to set up tents at the border where food and other humanitarian aid can be gathered and distributed to the migrants.

Nearby, a group of some 100 migrants was waiting to cross the border. “Belarusians equipped the foreigners with tear gas, which was used toward the Polish services,” the Border Guards said, saying the Poles stopped the attempts to cross.

Many of the reported incidents at the border are very hard to verify. Independent journalists face limits to their reporting in Belarus, and a state of emergency in Poland’s border zone prevents media from entering the area.

The state of emergency ends Nov. 30, and the Polish government said Saturday that it is working on a plan to let journalists at that time be able to again report from the border area with the permission of the Border Guards.

After the large migration into Europe in 2015, Europe has been reinforcing its borders to discourage the arrival of more migrants and refugees. Still, every year, tens of thousands try to get in, embarking on dangerous and sometimes deadly journeys by sea and land.

Since the summer, thousands have been lured by what appeared to be a new and easier way to slip into Europe, through Belarus.

The EU accuses Lukashenko of creating the artificial route in order to retaliate for sanctions against his regime imposed after an election in 2020 widely viewed as flawed and a harsh crackdown on internal dissent that followed.

The restrictions were toughened after an incident in May when a passenger jet flying from Greece to Lithuania was diverted by Belarus to Minsk, where authorities arrested dissident journalist Raman Pratasevich. The EU called it air piracy, barred Belarusian carriers from its skies and cut imports of the country’s top commodities, including petroleum products and potash, an ingredient in fertilizer.

A furious Lukashenko shot back by saying he would no longer abide by an agreement to stem illegal migration, arguing that the EU sanctions deprived his government of funds needed to contain flows of migrants. Planes carrying migrants from Iraq, Syria and other countries began arriving in Belarus.

Denial of responsibility! Verve Times is an automatic aggregator of the all world’s media. In each content, the hyperlink to the primary source is specified. All trademarks belong to their rightful owners, all materials to their authors. If you are the owner of the content and do not want us to publish your materials, please contact us by email – admin@vervetimes.com. The content will be deleted within 24 hours.
BelarusBelarus PolandeuropeEurope Newsmigrant crisisPolandpoland belarus borderPoland Belarus border deaths
0
Share FacebookTwitterGoogle+ReddItWhatsAppPinterestEmail

All Announcements Out of Disney’s Streaming Event