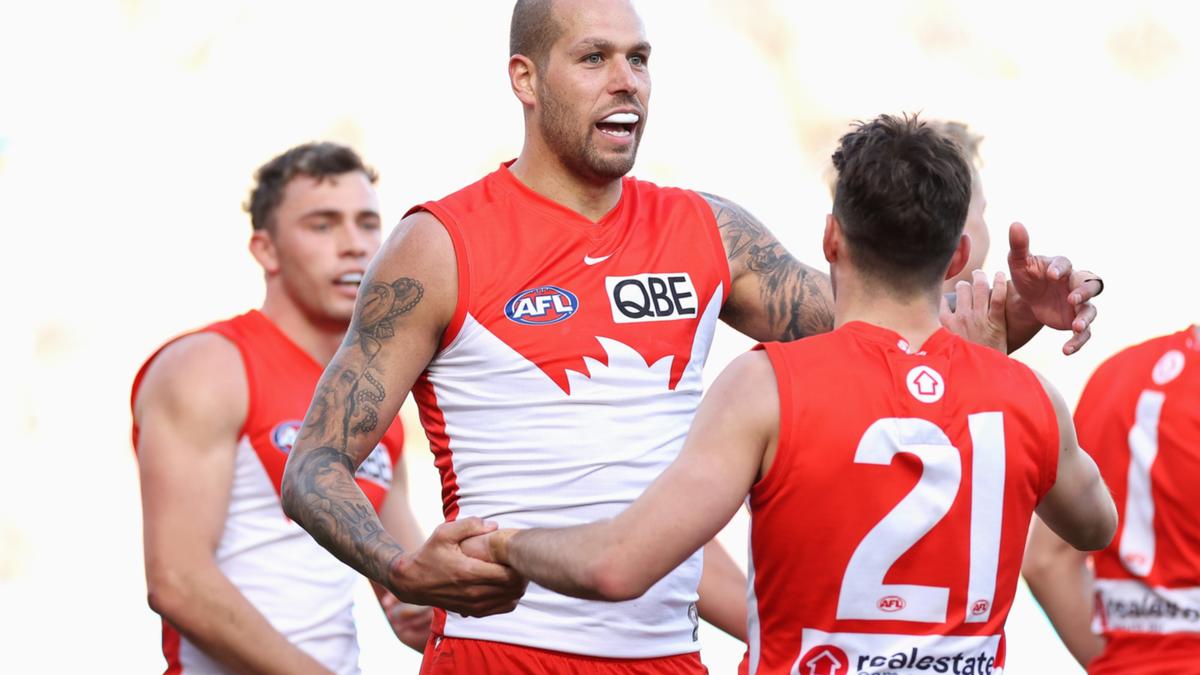 Sydney superstar Lance Franklin has sensationally put contract talks on hold until the end of the season as he weighs up his playing future.

The AFL future of the 35-year-old has been in the spotlight this week after reports emerged that he was set to depart the Swans with Brisbane the leading contender.

Franklin released a statement via his manager Adam Finch on Saturday morning saying he will make a decision at the end of the year and hinted that retirement is an option.

“At this stage conversations have been paused around my contract so I can put all my focus on playing footy. No further comment will be made until the season is done and I have decided about my future,” the statement read.

“I am still undecided and need time after the season to make a family decision about whether I continue to play next year.”

Franklin’s nine-year deal with the Swans expires this year where he will again be a restricted free agent.

He has kicked 41 goals from 17 games this year, including four in round two when he became the sixth player in history to kick 1000 goals.

Brisbane coach Chris Fagan says the reports caught him unawares, but the Lions are definitely keen to talk to the veteran forward.

Fagan, who knows Franklin well from his time at Hawthorn as an assistant coach, said those plans were “news to me” and could indicate Franklin was intending to hang up his boots.

If he wants to play on however, Fagan was adamant the Lions would be interested in exploring bringing Franklin to the Gabba.

“I would have thought if they are moving to Queensland, then that’s perhaps an indication that Bud’s going to retire from AFL football,” Fagan said.

“That’s sort of how I read it.

“If it came to pass down the track that they do move here and then someone reaches out from his camp and suggests that he still wants to play, then we’d be remiss as a footy club not to go and have a conversation with him.

“But we’re not the only club in Queensland, there’s the Gold Coast Suns as well.”

Whatever plays out with Franklin, Fagan said there was no doubt the two-time premiership player and four-time Coleman medallist would be a valuable asset despite his advancing years.

“I think every football club in the country would be keen to get Buddy Franklin to their footy club if that was a possibility,” Fagan said.

“Right now if he put a full stop on it, what a brilliant career. One of the greatest of all time.”

Earlier this week, Swans chief executive Tom Harley said the club would love Franklin to keep playing as long as he wants to and claimed there is “nothing untoward” in the delay on a new deal.

Dangerfield calls out ‘ridiculous’ AFL dispute: ‘What is the point?’

Denial of responsibility! Verve Times is an automatic aggregator of the all world’s media. In each content, the hyperlink to the primary source is specified. All trademarks belong to their rightful owners, all materials to their authors. If you are the owner of the content and do not want us to publish your materials, please contact us by email – [email protected]. The content will be deleted within 24 hours.
AFLBrisbane LionsLance FranklinsportSydney Swans
0
Share FacebookTwitterGoogle+ReddItWhatsAppPinterestEmail