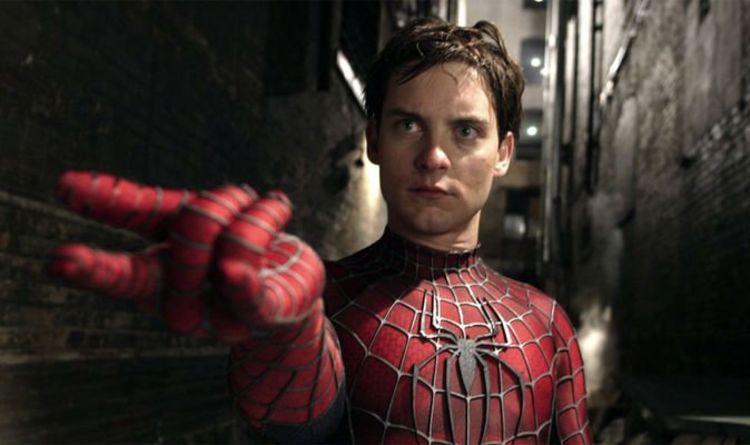 The second trailer for Spider-Man No Way Home confirmed that the Marvel multiverse is opening up to villains from non-MCU Sony movies. The five baddies are one each from Tobey Maguire and Andrew Garfield’s five films in Green Goblin, Doc Ock, Sandman, Lizard and Electro. But other than Tom Holland, surely the other two Peter Parkers are set to show up?

Well now one fan has shared images of some Spider-Man No Way Home merchandise and it looks like Maguire’s Peter in his Web Slinger costume partially appears.

Dominic Kravitz was looking closely at his Bark Box promo art for the upcoming Marvel movie and in an image of Holland’s Spidey, the mask of Maguire’s can clearly be seen in black and white.

According to their official Twitter, Bark Box is “a monthly box of toys, treats, and chews to thrill your dogs.”

The fan shared a video to show the merchandise wasn’t a fake, explaining how when he looked really closely, the Sam Raimi trilogy Web Slinger was spotted.

The fan said: “I saw that Tobey was in the corner and I was like woah, what the f***! I did not fake this. I hope that this is proof enough that this is real.”

The image of Maguire’s Web Slinger is from the Daily Bugle’s front page in the original Raimi Spider-Man movie.

Aside from this image, there have been alleged leaked set photos of the three Spider-Mans standing on some scaffolding.

This looks suspiciously similar to Statue of Liberty scenes in the last trailer with Electro, Sandman and Lizard.

In one international version of the trailer, fans spotted that Lizard was jumping into nothing and was then punched by thin air.

Could the trailers have been edited to keep Maguire and Garfield’s inclusion a secret?

And with Raimi directing Doctor Strange in the Multiverse of Madness coming out next year, maybe these variant Peter Parkers will show up there too?

Whatever the case, Holland has teased a much darker outing for his usually upbeat incarnation.

Speaking with Total Film, Holland said: “What people will be really surprised about is that it’s not fun, this film, It’s dark and it’s sad, and it’s going to be really affecting.”

The 25-year-old said how the characters that fans have become so attached to will be going through some very tough times.

Australia’s cosmetic surgery industry to be reviewed amid…