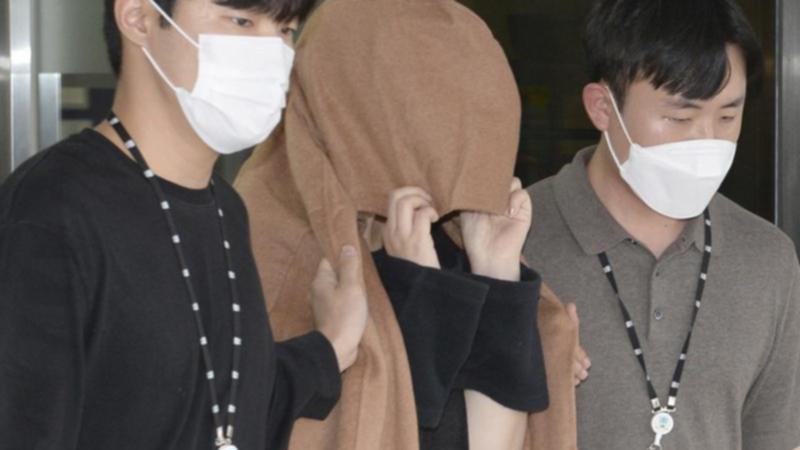 A South Korean woman arrested in relation to the murder of two children who were found in abandoned suitcases in New Zealand has fronted an Auckland court charged with two counts of murder.

As reported by the NZ Herald, the 42-year-old faced Manukau District Court courtroom on Wednesday morning.

WATCH THE VIDEO ABOVE: Crocodile Wrangler arrives at Darwin court.

The woman’s name has been suppressed, however it has been confirmed she is the mother of the two children whose remains were found in August.

She was extradited from South Korea to New Zealand two months after she was arrested following the discovery of the bodies, and arrived at Auckland Airport on Monday afternoon.

The woman spoke out for the first time as she departed South Korea, flatly denying the murder allegations when asked by local media if she would confess.

“I didn’t do it,” she repeatedly told reporters, according to Yonhap News Agency.

The 42-year-old was remanded without plea into custody, and will appear at Auckland High Court on December 14, the NZ Herald reported.

“The investigation team would like to acknowledge the assistance from agencies both in New Zealand and South Korea, which has meant we have been able to put an alleged offender before the court,” Detective Inspector Tofilau Fa’amanuia Vaaelua said on Tuesday.

Two children’s bodies were discovered when an Auckland family bought abandoned goods, including two suitcases, from a storage unit in an online auction.

New Zealand news outlet Stuff reported the victims were thought to be a girl and a boy, born in Auckland in 2009 and 2012 respectively.

The children’s parents are believed to have been married in New Zealand, however are both originally from Seoul, South Korea.

It’s understood the father of the children died of cancer in late 2017 before his wife left New Zealand and flew to South Korea.

“With the extradition, we hope that the truth of the case, which has garnered worldwide attention, will be revealed through the fair and strict judicial process of New Zealand,” it said.

The Seoul High Court had earlier granted approval of her extradition after she expressed her consent in writing to be sent back to New Zealand.

South Korean police arrested the woman at a southern port city in September, based on a domestic court warrant issued after New Zealand requested her provisional arrest.

New Zealand’s justice ministry then submitted a formal request for her extradition to the South Korean ministry.

South Korean police say the woman gained citizenship in New Zealand but returned to South Korea in 2018 according to immigration records.

South Korean police have said it was suspected she could be the mother of the two children as her past address in New Zealand was registered to the storage unit where the suitcases were kept.

A New Zealand coroner has put in place a temporary order preventing the publication of the names of the victims.

Arrest warrant issued for Madeleine McCann suspect in other cases

‘Christmas Miracle’: Woman reunited with family 51 years after being abducted as a toddler

Denial of responsibility! Verve Times is an automatic aggregator of the all world’s media. In each content, the hyperlink to the primary source is specified. All trademarks belong to their rightful owners, all materials to their authors. If you are the owner of the content and do not want us to publish your materials, please contact us by email – [email protected]. The content will be deleted within 24 hours.
CrimeNew ZealandNewsWorld News
0
Share FacebookTwitterGoogle+ReddItWhatsAppPinterestEmail

Taiwan vulnerable to China as US focuses on Ukraine