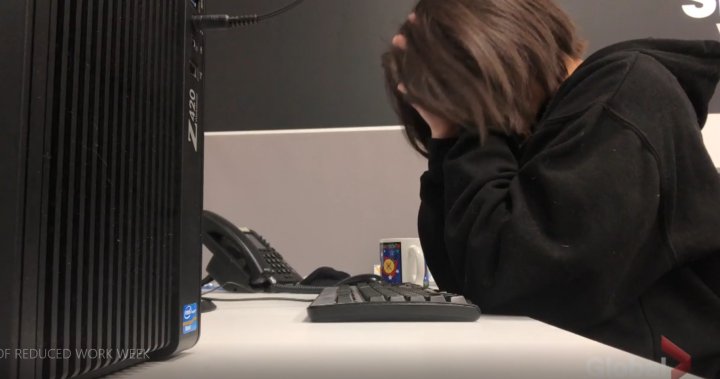 Some places make the case for a four-day workweek. Can it work everywhere? – National

The rural township of Zorra, just east of London, Ont., is home to one of Canada’s largest public-sector trials of the four-day workweek.

The township’s 14 municipal staff are taking part in an eight-month test project. The first leg of the pilot ran from September to December 2020. It was paused as staff worked remotely for the first half of this year.

But the second four-month installment kicked off in the first full working week of July.

Don MacLeod, Zorra’s chief administrative officer, tells Global News there have been no complaints so far from staff or the public.

“For those that have small children, it’s one less day of daycare. In my case, my father’s elderly. So that’s my day to take him to appointments,” he said.

The pandemic has upended many long-held beliefs about flexible work arrangements. Labour experts say the past 14 months have provided a glimpse into the impact of remote and hybrid work hours on a massive scale. Increasingly, managers are evaluating the benefits of condensed workweeks as a tool for improving efficiency, retaining current employees and enticing new hires.

In early July, results from the world’s largest study of a four-day workweek were released, based on a four-year trial in Iceland by 2,500 public service workers. It concluded that productivity in Icelandic offices, hospitals and police stations either remained constant or was boosted.

Zorra’s experiment, meanwhile, is modelled after a larger, pioneering four-day work week trial in Guysborough, N.S., that ran last year and was adopted as a policy in April.

How a compressed week works

MacLeod says his team is divided into a cohort that works Monday to Thursday and another that works Tuesday to Friday. Their total weekly hours remain 35 but with four 8.75-hour days instead of five seven-hour days. The staff’s pay has not changed during the trial.

Alycia Wettlaufer, 26, is a legislative coordinator and deputy clerk for the Township of Zorra where she has worked for nearly three years. She tells Global News there is a learning curve to a condensed week.

MacLeod says the condensed week requires a “mind shift” when it comes to timing deadlines and meetings. And there is planning involved in setting up voicemail messages and out-of-office notices to reflect a new schedule.

The Zorra experiment will run until November and then staff will assess productivity, benefits and challenges with researchers at Western University’s department of public administration.

Read more:
A workplace resignation boom may be looming. Here’s why

MacLeod hopes to use a condensed work week as a recruitment tool to compete with larger municipalities that can offer more money.

Wettlaufer says it’s a perk that she, and many of her peers, values greatly.

“When news broke that we were trying this four-day work week pilot, I had so many classmates messaging me and asking if I was hiring or if any jobs are going to become available because everyone was interested,” she says. “Every week is a long weekend.”

MacLeod says Zorra’s pilot has caught the attention of many others from coast to coast.

“I’ve taken calls from all across the country, from municipalities and private businesses, looking for information on the four-day workweek,” he says. “It seems to be catching on.”

A better fit for certain types of work

Chris Higgins, a professor emeritus at Western University’s Ivey School of Business, has studied how companies can help employees achieve better work-life balance for more than three decades. He says the pandemic has forced employers to push the envelope in offering flexible work arrangements.

He sees many potential benefits to compressed workweeks, as well as unintended consequences that we’re only starting to understand. Overall, he sees many positives associated with spreading non-work activity over three days instead of “cramming everything” into the weekend.

“You could go grocery shopping on a Tuesday when it’s easier instead of Saturday. So you get a distribution of the services across more days,” Higgins says. “Look at traffic. The pandemic has shown us that when you get cars off the road, you get to where you’re going more quickly.”

Wettlaufer says she saw improvements to her work-life balance after starting the four-day workweek schedule.

Read more:
Canadians want a four-day work week. But would it work?

“I found within the first couple of weeks that my work-life balance was improved and I was able to do a lot more things with family and my personal life and come to work recharged,” she says.

But Higgins cautions that a four-day workweek isn’t feasible for certain types of employment including taxing manual labour or jobs that require intense concentration such as computer programming — productivity dips with longer shifts.

Higgins says the experiment in Iceland offered productivity-boosting examples that can be applied to all kinds of workplaces. Chief among them: cutting down on unnecessary meetings.

“If companies take a good hard look at things they can do to reduce stress and make the workday easier, there’s a lot that can be done,” he says. “We all know that work-life balance comes down to less work, that’s just the way it is.”

Denial of responsibility! Verve Times is an automatic aggregator of the all world’s media. In each content, the hyperlink to the primary source is specified. All trademarks belong to their rightful owners, all materials to their authors. If you are the owner of the content and do not want us to publish your materials, please contact us by email – admin@vervetimes.com. The content will be deleted within 24 hours.
4 day workweek4-day work week4-day work week canadaCanadacondensed weekEconomyFlexible WorkFour-day Work Week
0
Share FacebookTwitterGoogle+ReddItWhatsAppPinterestEmail

Wells Fargo is shutting down all personal line of credit accounts