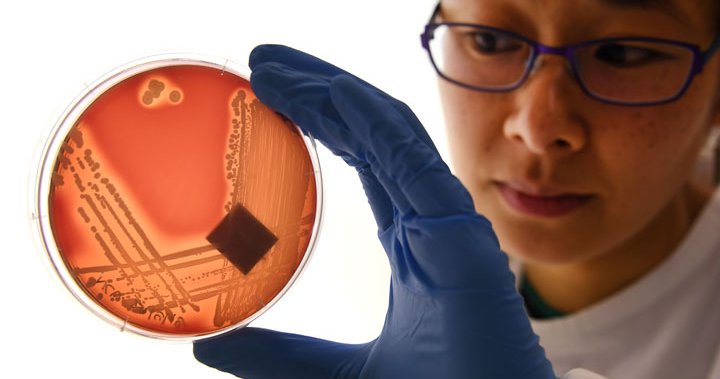 Rachel Sears was only 17 years old when a simple blemish on her face became a terrifying, painful ‘superbug’ overnight.

She had been working as a cashier at a grocery store and it’s there her doctors told her she must have picked up the antibiotic-resistant bacteria, possibly from some cash handled by an infected person.

She likely scratched or simply rubbed the blemish on her forehead – nothing out of the ordinary – and inadvertently infected herself, she said.

“I remember thinking, ‘Oh, it has a weird, swelling feeling.’ And I went to bed like nothing,” Sears said, recalling the hours after her shift.

“I woke up the next morning and it was so swollen. It was humongous.”

She immediately went to the hospital where, 12 hours later, physicians determined it was methicillin-resistant Staphylococcus aureus (MRSA) and she was placed on intravenous antibiotics, used for infections that are resistant to oral antibiotics.

Sears, now 32, says the experience was “traumatic,” as she was only a teen at the time.

“My mom was like, ‘What’s happening? This is my baby.’ These are like big, scary words,” she recalled.

“Then you do some Googling after and you think, ‘what if it didn’t work? What if antibiotics didn’t work? Then what?’ Then I’m screwed because they used the most potent antibiotics,” she said.

Unfortunately, it was not to be her last time contracting an antibiotic-resistant infection.

How antibiotic resistance has an impact on future diseases

Sears says she contracted at least two staph infections from routine abrasions, such as cuts from shaving, in the ensuing years. Then, a year after her son was born, she was diagnosed with the intestinal superbug Clostridioides difficile, better known as C. difficile.

Eventually, she turned to help from naturopathic doctor, which she says has resulted in a marked improvement in her health.

“I just can’t help but think that it goes back to contracting that first superbug and then those antibiotics,” she said.

The rising threat of so-called superbugs, or antibiotic-resistant infections, is just one of a number of concerns in what some experts say is a dangerous worldwide increase in antimicrobial resistance (AMR) – a phenomenon that occurs when bacteria, viruses, fungi and parasites no longer respond to antimicrobial agents like antibiotics, fungicides, antiviral agents and parasiticides.

It’s a problem that may not receive regular attention in the public or the media, but concerns about this growing phenomenon have become so prevalent, it is being called a “silent pandemic” that is contributing to millions of deaths every year, according to global infectious diseases specialists.


A large group of researchers looking at the burden of AMR worldwide in 2019 estimated that antimicrobial resistance in bacteria caused an estimated 1.27 million deaths in that year, according to their study, published in The Lancet.

Dr. Susan Poutanen, a medical microbiologist and infectious disease physician at the University Health Network and Sinai Health, says in Canada, an estimated 14,000 deaths every year are associated in some way with antimicrobial resistance.

“This is somewhat of an unrecognized, quiet or silent pandemic,” Poutanen said.

“Every year there’s increasing resistance, and yet there’s not the same face to the problem as you might have with, say, cancer or with heart attacks and strokes and the amazing public campaigns and awareness (of those health risks).”

This lack of public awareness means not only that Canadians are left in the dark about the threats of AMR, but also that investments and research into solutions are also not getting priority treatment, she added.

Antibiotic-resistant ‘superbugs’ killed over 1.2M globally in one year: study

The main driver of antimicrobial resistance is the misuse and overuse of antibiotics, both in human disease management and in industrial agriculture and food production, according to the World Health Organization (WHO).

And the COVID-19 pandemic has only exacerbated the problem of overprescription and overuse of antibiotics, experts say.

Early on in the outbreak, many patients admitted to hospitals with SARS-CoV-2 were given antibiotics, even when it was not clear that a bacterial infection was present, Poutanen said.

Antibiotics are not effective against viruses and should only be used in cases of bacterial infections, she noted.

“We know when someone presents with what’s most likely a viral illness from the best judgment of a clinician, there’s still often a, ‘Well, what if? It may not be,’ reaction of giving an antimicrobial, even if it’s predominantly likely not a bacterial infection,” she said.

“We’ve certainly learned since some of that data was shared with clinicians that there’s very few (COVID-19 patients) that are coming in with a bacterial infection, and that certainly improved some of that empiric choice of using antibacterials.”

1:58
Take a second look at your antibiotics, health experts say


But the current surge in respiratory illness across Canada is now also likely sparking “increased use and an overuse” of antibiotics, which only stands to heighten the concerns and prevalence of drug-resistance, she added.

The overuse of antibiotics in Canada is not limited to health care. Producers of major crops like citrus and rice often make heavy use of antimicrobial sprays; antibiotics are often used as growth promoters and given proactively to prevent infection in livestock and antifungals used by the tulip industry and other agriculture crops are also contributing to a growing resistance to fungal infections, says Dr. John Conly, an infectious disease physician and professor in the Department of Medicine at the University of Calgary, who has been working in the field of antimicrobial resistance for the last 25 years.

That’s why specialists and leaders from around the globe have been increasingly trying to shine a light on this issue, with the help of the WHO.

Last week, the WHO held its third global “high-level ministerial conference on antimicrobial resistance,” where a manifesto was created that set three global targets to tackle this challenge.

The targets include: reducing the total amount of antimicrobials used in agrifood systems by at least 30-50 per cent by 2030; ending the use of medically-important antimicrobials for growth promotion in animals; and ensuring a specific category of 48 antibiotics that are affordable, safe and have a low AMR risk (known as ‘access group antibiotics’) represent at least 60 per cent of overall antibiotic consumption in humans by 2030.

Conly says more rapid diagnostics in clinical settings – to reduce over-testing and preemptive prescription of antibiotics – as well as digital guidelines on the use of antibiotics in health care would also help to curb the progression of antimicrobial resistance.

Ultimately, if more is not done to address this problem, more superbugs will spread more widely, leading to more preventable illness and death in Canada and around the world, he said.

“It’s like a tsunami that’s emerging, but it’s far out to sea and you don’t see it,” Conly said. “And then one day it’s just suddenly going to emerge and we’re going to say, ‘Did we not see this coming?’”

Denial of responsibility! Verve Times is an automatic aggregator of the all world’s media. In each content, the hyperlink to the primary source is specified. All trademarks belong to their rightful owners, all materials to their authors. If you are the owner of the content and do not want us to publish your materials, please contact us by email – [email protected]. The content will be deleted within 24 hours.
antibiotic misuseAntibiotic Overuseantibiotic resistanceantibioticsAntimicrobial resistanceCanadaCanada. NewsCOVID
0
Share FacebookTwitterGoogle+ReddItWhatsAppPinterestEmail