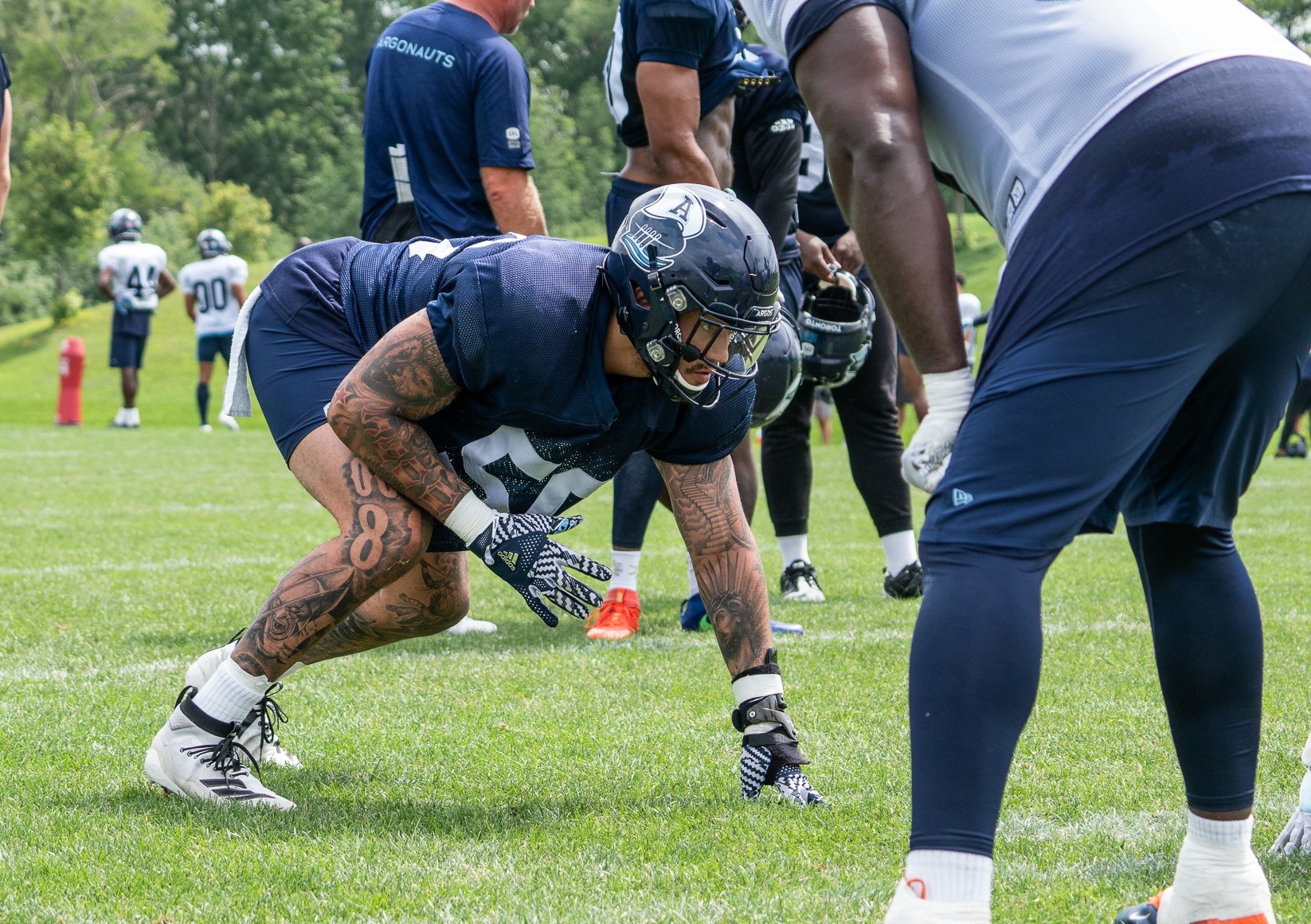 Shane Ray, Andrew Harris stand out as Argonauts’ eyes on the prize on Day 1 of camp

On Day 1 of Camp Argonauts, head coach Ryan Dinwiddie was quite pleased at the way players were flying around and how much energy could be felt.

“It was a great practice,’’ began Dinwiddie. “We threw a lot at them, it was a heavy load.”

What will play out in the ensuing days, weeks and months is anyone’s guess, but Dinwiddie understands how the stakes are high for an Argos team that failed to hold serve at home in the East final last season against the Hamilton Tiger-Cats.

“The guys are fired-up,’’ he continued. “They have their eyes on the prize.”
Some tough decisions will have to made given the makeup of the roster, which is deep in both talent and experience.

Just prior to the recent labour impasse — which ended late Wednesday night with a new CBA being reached — the Argos huddled at the University of Guelph for a three-day rookie camp.

Dinwiddie and his staff liked what they saw.

Eventually, the roster will have to be turned over as a new wave of players enters football’s fray.

For now, Dinwiddie is tasked with finding the right players and ensuring that the pieces fit.

Defensive lineman Shane Ray was present as was long-time Blue Bomber Andrew Harris, whose presence in the offensive backfield was immediately felt.

Dinwiddie was impressed by the way Harris hit the holes.

“He’s going to make us better,’’ said the head coach, who won’t have D.J. Foster to lean on now that the American back has decided to pursue other opportunities. Harris, 35, didn’t have his contract renewed by the two-time Grey Cup champion Bombers and signed with Toronto as a free agent.

“He (Harris) brought that downhill running and it was nice to see him back,’’ said Dinwiddie. “He looked great. He probably had three or four runs of 10-plus (yards). He does a great job of drawing linebackers to our double-teams in our zone schemes.

“That’s something we struggled with last year. He’s going to make us a better football club and I can see that already. We’ve got to keep him healthy and find him a pitch count. I have to be careful with that, but it was great seeing him out there.”

Ray, meanwhile, was flying around on defence.

Though he was given permission by the Argos this off-season to pursue NFL opportunities, he is back in Double Blue hoping to bounce back from a rookie season marred by injuries.

“Shane had a productive day,’’ said Dinwiddie. “We didn’t see much of the injuries. He knows he has to be available.”

On paper, the Argos figure to pressure the backfield with a healthy Ray and marquee free-agent signing Ja’Gared Davis as a formidable rush end tandem.

One player who wasn’t practising was veteran middle linebacker Henoc Muamba, who enters his second season with the Boatmen.

Muamba also served as second vice-president on the CFLPA board of directors during the just-concluded CBA talks.
“It was a vigorous and long process,’’ said Muamba, “but one I’m extremely grateful to have been part of for the first time. I had some great guys around me who have been around the league and been around the table for awhile.

“It was exciting. One of the main reasons why I was so invested was I wanted to have an impact on the game beyond the time I’m done playing.”

The negotiated deal is for seven years.

Among other negotiated items is the potential for veterans in the final years of their contracts to receive up to 50% in guaranteed money.

Another facet allows for what is generally known as naturalized citizenship for an American.

“It was a concept that really was thought about by both parties and we tried to have the best interest of anyone in mind, American and national alike,’’ said Muamba. “It’s three years on the same team or five years in the league. Basically, it allows for guys to be naturalized Americans and they can also have more bargaining power when it comes time to renegotiate.

“At the same time we were able to maintain the ratio.”

AN APPEAL FOR SANITY

Plenty of heads were turned when Chris Edwards was given a league-imposed suspension of six games from his post-game fracas at BMO Field following the Argos’ loss to Hamilton in the East final last fall.

Whatever gets said, and even thrown, by fans can’t justify any player getting caught up in the moment.

Edwards did, but his six-game suspension, which amounts to one-third of the season, seemed way too much.

Dinwiddie said the all-star linebacker is going through the process of appealing the suspension.

“We’re not sure of the end result yet,’’ said Dinwiddie. “He has spoken to the league (about getting the suspension reduced). Hopefully, we’ll find out in the next week or two.”

The CFL hash marks will be shortened as part of a series of new rules designed to increase offence in a league that suffered from a lack of it last season.

Dinwiddie got his first glimpse during rookie camp and admits that he had to make some adjustments on the fly.

He was using the ‘Z’ split — which refers to the receiver on the far side of the field — as an example and noticed how there was too much congestion given the tightening of the hash marks.

In theory, the new rule allows for receivers to be closer to the line of scrimmage.

With receivers in close proximity to the QB, a weak side linebacker will be forced to cover in space more than he did previous to the change.

Some teams figure to use a safety at WIL.

deGrom: Rangers made ‘me feel like they really wanted…