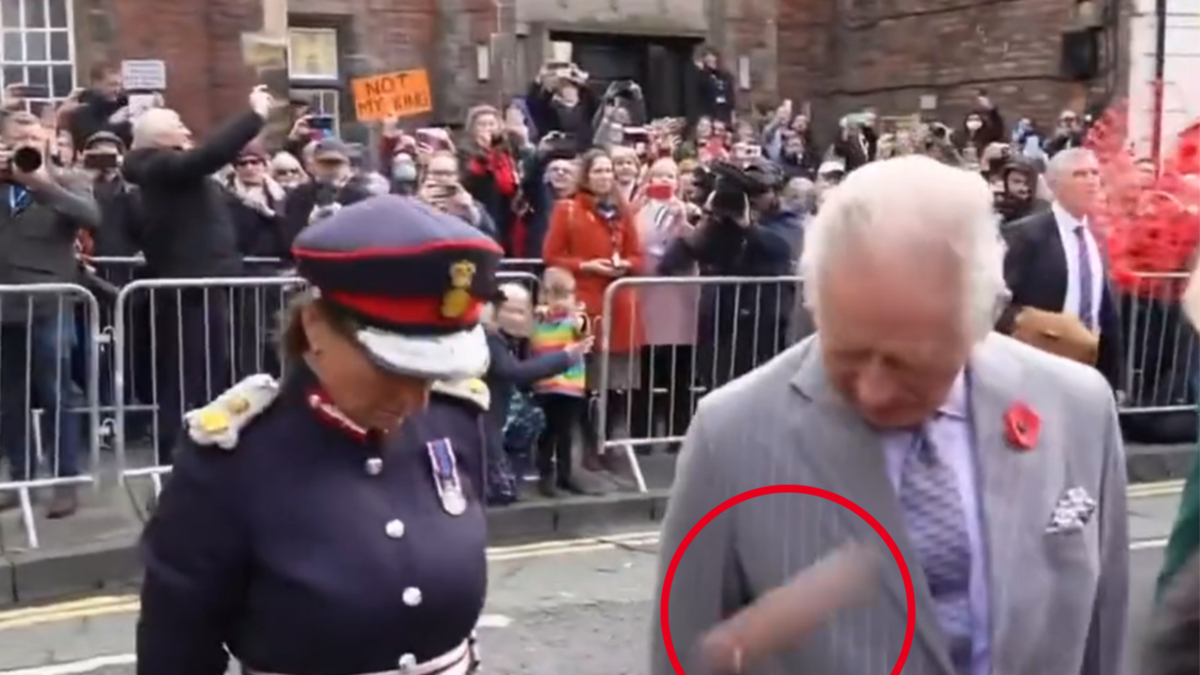 King Charles and Camilla, Queen Consort kept cool, calm and collected as a man launched eggs at them in protest while greeting crowds in York.

British police say the man responsible has been detained after throwing four eggs while the royal couple walked in the northern England city of York.

WATCH THE VIDEO ABOVE: King Charles egged during a royal walkabout.

The incident happened as the monarch and his wife entered York through Micklegate Bar, a medieval gateway where monarchs are traditionally welcomed to the city.

Video footage showed several eggs in motion, before smashing on the ground.

None appeared to hit the royal couple but fall near the King’s feet.

Several police officers could be seen grappling with a man at a crowd barrier.

The man shouted, “this country was built on the blood of slaves” as he was being detained, according to Britain’s PA news agency.

As the protester was arrested, others shouted, “shame on you” and “God save the King”.

Charles and Camilla appeared unbothered by the ordeal and continued to greet crowds.

Charles and Camilla also are due to visit the city’s cathedral, York Minster, and unveil a statue of Queen Elizabeth II, who died on September 8.

Sunrise royal correspondent Rob Jobson said the palace has had to deal with these public moments before, recalling the late Queen being egged in 1992.

Jobson said the protestor was “well known to the authorities” and “quite active” with marches and protests.

“I don’t think it was directed particularly at the King but (the crowd) are all starting to say ‘shame on him’ afterwards and we see King Charles deal with these, and he just goes on,” Jobson said.

“(The security team) were a bit slow, the public were moving in on the guy quicker than the police. I mean there were four eggs thrown, if that had been a projectile other than an egg – if it had been a bit more serious …

“It was quite a slow reaction for him to lob that amount of eggs, it’ll shows that time was taken,” he said.

“But I’m sure (the police) will be reviewing it because it wasn’t a great show.”

In 1992 Queen Elizabeth and her husband Prince Philip visited Dresden, Germany, and were pelted with eggs due to a fallout from World War II, during which the area was heavily bombed by the British.

The Queen reportedly did not let the incident affect the day and she “carried it off well,” continuing her visit to the city’s Kreuzkirche church, royal historian Hugo Vickers told Express.

“She went all through all the different areas of Germany,” the historian said.

“She also later went to Dresden, which was very badly bombed by the British towards the end of the war.

“People threw eggs at her – there were one or two protests during that visit, but she carried that off well.”

Denial of responsibility! Verve Times is an automatic aggregator of the all world’s media. In each content, the hyperlink to the primary source is specified. All trademarks belong to their rightful owners, all materials to their authors. If you are the owner of the content and do not want us to publish your materials, please contact us by email – [email protected]. The content will be deleted within 24 hours.
EntertainmentKing Charles IIIRoyal Family
0
Share FacebookTwitterGoogle+ReddItWhatsAppPinterestEmail

These Are Your Favorite Cold-Weather Car Mods

The Ultimate Guide to Getting an Ayurvedic Massage