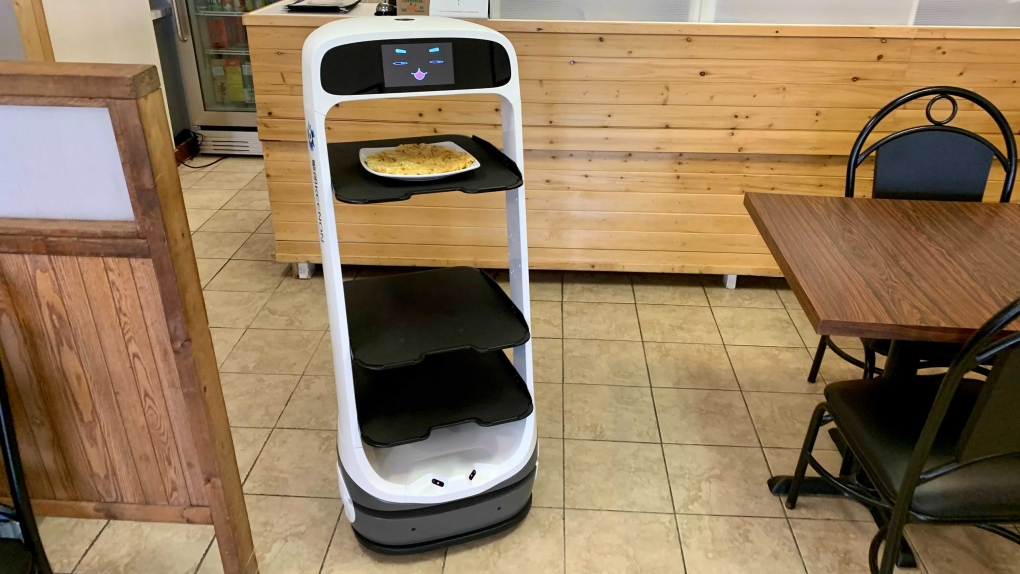 A Winnipeg restaurant struggling to keep staff during the pandemic found a futuristic solution – it hired a robot.

Dirk Wang, one of the owners at Hong Du Kkae on Pembina Highway, had been looking at buying a robot for the restaurant for while. After months of challenges amid the pandemic, Wang said they finally decided to pay $26,000 to bring the new robotic employee onboard.

“All the other employees enjoy working with him,” Wang said.

Servers still take diners’ orders, but then the robot takes over, delivering the food and drinks to tables.

“I was very shocked because I’ve never seen anything like that in person. So I think it’s very cute, and also it’s just convenient,” said Thao To, an international student from Vietnam who was visiting the restaurant on Wednesday.

“I believe not a lot of people living in Winnipeg have seen anything like this before. So I think they’re going to come to this restaurant and experiences themselves.”

James Young, a computer science professor at the University of Manitoba, said automation within restaurants is nothing new.

“There’s sushi boats or conveyor belts delivering food, and McDonald’s now has kiosks. So I see the automation as being just a natural step of what we’ve been seeing,” he said.

“Robots are increasing dramatically, and their robustness and the prices are dropping dramatically. So definitely we’ll see more of this going forward.”

A robot serves food at Hong Du Kkae in Winnipeg on March 30. The restaurant’s owner paid $26,000 for the robot to help deal with staffing challenges during the pandemic. (CTV News Photo Scott Andersson)

Though robots may be increasing, Young said he doesn’t believe they will replace the individual touch a real person brings to the table.

Shaun Jeffrey, CEO of the Manitoba Restaurants and Food Services Association, said he applauds the restaurant for trying something new, though he doesn’t expect robot servers to become the norm in Winnipeg restaurants.

“When you think about the nature behind the hospitality industry in a full-service environment, you’re really looking for that fun smiling face. That person-on-person atmosphere is what really kind of drives people out in the industry in first place,” he said.

“I don’t foresee any future in replacing that smiling face or that amazing story that you’re going to get from a person serving you with an automation that’s just there to serve your food.”

Wang said the robot is a big hit with his customers, bringing his business up 25 per cent since the start of the month.

“A lot of them really like it. I know a couple of people, they come here, ‘Okay, I want to give the robot the tips,'” he said.

Even with the robot’s popularity, Wang said he doesn’t intend to bring any more robots onto the staff.

“It doesn’t replace them because the customers still need to talk to the server and also when they need some extra stuff the robot cannot do it.”

COVID-19 deaths jump by 40 per cent around the world but cases are falling globally, according to the World Health Organisation