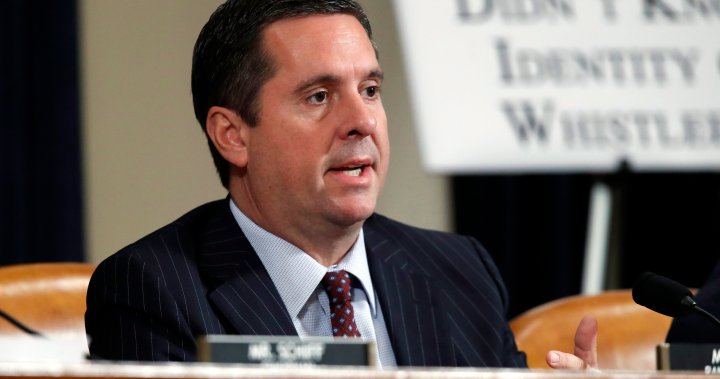 California Republican Rep. Devin Nunes, who was one of former President Donald Trump’s most ardent loyalists in Congress, is leaving the House at the end of this year to join Trump’s fledgling media company.

A statement Monday from the Trump Media & Technology group said Nunes would serve as chief executive officer, beginning in January 2022. The company is preparing to launch a social media platform intended to rival competitors, including Twitter, which blocked Trump’s account in January following the deadly storming of the U.S. Capitol.

In June, Facebook suspended Trump’s accounts for two years, following a finding that he stoked violence ahead of the Jan. 6 insurrection.

“Devin understands that we must stop the liberal media and Big Tech from destroying the freedoms that make America great,” Trump said in a statement.

Nunes’ decision comes at a time when his political future in California appeared in possible jeopardy — draft maps released in the once-a-decade realignment of congressional districts suggested he would face a challenging reelection in the 2022 midterms. Those maps will not be finalized until later this month.

Nunes, 48, said in a statement: “The time has come to reopen the Internet and allow for the free flow of ideas and expression without censorship. The United States of America made the dream of the Internet a reality and it will be an American company that restores the dream.”

Trump’s decision to select one of his most pugilistic defenders to oversee his new media group — instead of a seasoned business leader — makes clear that he intends to use the company for political benefit as much as for profit.

Nunes also is a harsh critic of mainstream media firms. He sued CNN and Twitter for defamation, among other companies, seeking hundreds of millions of dollars. Both cases were thrown out by judges.

Trump announced the launch of his media company in October. The company says its plans include the creation of “Truth Social,” a Twitter-style social media app, as well as a subscription-based video streaming service that will feature entertainment programming, news and podcasts. Trump is listed as the company’s chair.

Trump’s media company and Digital World Acquisition announced over the weekend they had agreements for $1 billion in capital from institutional investors.

The Securities and Exchange Commission and the Financial Industry Regulatory Authority are looking into the deal. Digital World Acquisition Corp. launched on the U.S. stock market three weeks earlier with the sole purpose of finding a privately held company to buy.

Nunes is the top Republican on the House intelligence committee and was the panel’s chairman before Democrats won the majority in 2018. He launched the committee’s investigation into Trump’s ties to Russia along with California Rep. Adam Schiff, the top Democrat on the panel who is now its chairman.

Soon after they announced the probe, though, Nunes became one of Trump’s most forceful defenders in Congress. In early 2017, he visited the White House, reviewed documents there and then held a press conference saying that communications involving Trump associates had been swept up by U.S. spy agencies and were mishandled by former President Barack Obama’s administration. After an uproar, the House Ethics Committee said it would investigate the visit and determine whether he had leaked classified information.

The ethics panel cleared Nunes a year later, but Nunes had already recused himself from the Russia probe.

After a contentious investigation that Democrats claimed was biased in Trump’s favor, the Intelligence committee found that Russia interfered in the election but that there was no evidence of coordination between Trump’s campaign and Russia.

Nunes was also in the spotlight as he ardently defended Trump through Democrats’ 2019 impeachment inquiry, which was led by Schiff and the intelligence panel.

In early 2021, two days before the Jan. 6 Capitol insurrection, Trump awarded Nunes the Presidential Medal of Freedom. In a statement, the White House credited Nunes with uncovering “the greatest scandal in American history,” referencing Nunes’ efforts to discredit the Russia investigation.

In a statement, House Republican leader Kevin McCarthy called Nunes an “American patriot” said there is no person “better … prepared to compete head-to-head and lead an alternative to the Big Tech and big media cartel that has carried water for the Democrat Party for years.”

Denial of responsibility! Verve Times is an automatic aggregator of the all world’s media. In each content, the hyperlink to the primary source is specified. All trademarks belong to their rightful owners, all materials to their authors. If you are the owner of the content and do not want us to publish your materials, please contact us by email – [email protected]. The content will be deleted within 24 hours.
Devin Nunesdevin nunes congressdevin nunes retiresDonald TrumpPoliticsRepublicanstrump mediaTrump social media
0
Share FacebookTwitterGoogle+ReddItWhatsAppPinterestEmail

Why does Beijing have the Olympics again?

10 Times Thor Was A Jerk

President Joe Biden has long been preparing for a Supreme…