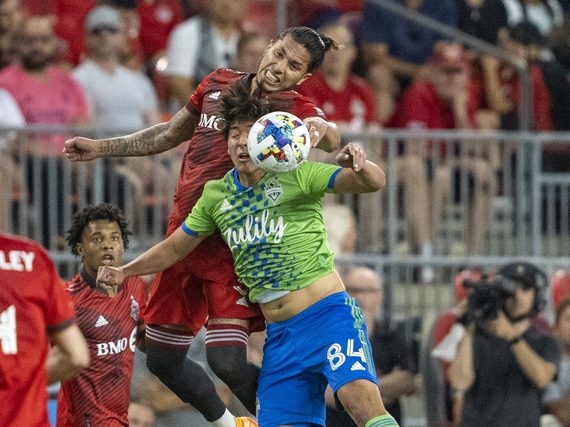 Toronto FC released one of its ‘inspirational’ tweets on Monday afternoon with a picture of the players in a huddle, arms around each other’s shoulders, with the caption: ‘Forward together.’

But you have to wonder how much the ‘together’ part will include first-year centre back Carlos Salcedo.

Pro Soccer Wire reported on Monday that the club is looking to move Salcedo. If that happened, it wouldn’t be a major surprise. His play in Toronto so far has been inconsistent and, according to Pro Soccer Wire, Salcedo is being shopped around MLS and Liga MX.

However, a Toronto FC source poured cold water on that, indicating that, as of now, Salcedo’s standing is still good with the Reds and, as TFC coach Bob Bradley said Saturday following his team’s 2-0 loss to the Seattle Sounders, Salcedo is going through some personal family issues that the club is working with him on.

TFC acquired the 28-year-old veteran centre back in January from Tigres UANL as a Designated Player through 2024 with a 2025 option (with Venezuelan international winger Yeferson Soteldo going the other way).

Salcedo’s play this year as been, at times, disappointing. In some games, he has played like a solid, veteran CB who has represented Concacaf powerhouse Mexico 48 times. But on other occasions, he has not played particularly well. Certainly not what an MLS team would want out of a DP.

TFC had a dreadful campaign last year defensively, and Salcedo was supposed to help solidify the backline this year. Of course, a club’s defence doesn’t fall on the shoulders of one player, but TFC’s defensive struggled have continued this season. The team has allowed 34 goals in 18 games, the most in the MLS Eastern Conference and second-most in the league.

Salcedo takes up a valuable DP spot, with newcomer Lorenzo Insigne and Alejandro Pozuelo the other two. MLS clubs are allowed only three DP spots, which can be paid outside of the salary cap.

Salcedo has played in 13 matches for TFC, playing 1,156 minutes and has twice appeared in Canadian Championship games. He also missed a game this year because of suspension.

As a youth, Salcedo came up with the Real Salt Lake Academy, making his MLS debut in 2013 before transferring to Mexican powerhouse Chivas. He spent four seasons in Liga MX before making a move to the Bundesliga and Eintracht Frankfurt. He moved back to Liga MX with Tigres in 2019.

The Reds have lost two games in a row and play host to San Jose on Saturday night at BMO Field. Toronto FC’s two Serie A newcomers, Lorenzo Insigne and Domenico Criscito, are expected to play for TFC for the first time in that game.