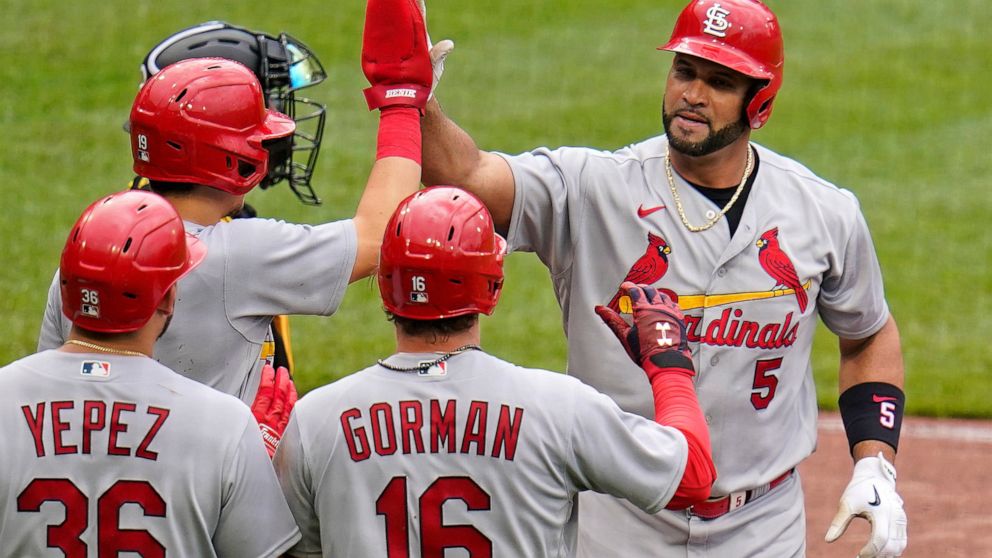 Albert Pujols hit two home runs, then caught the warmup tosses when star catcher Yadier Molina made his first pitching appearance to close out the St. Louis Cardinals 18-4 romp over the Pittsburgh Pirates

PITTSBURGH — Albert Pujols hit two home runs, then caught the warmup tosses when star catcher Yadier Molina made his first pitching appearance to close out the St. Louis Cardinals’ 18-4 romp over the Pittsburgh Pirates on Sunday.

Molina gave up a pair of homers and four runs while working the ninth inning, eventually completing the Cardinals’ three-game sweep.

But it was not all fun and games for St. Louis. Starter Steven Matz lasted only four pitches before being pulled with stiffness in his left shoulder.

Pujols boosted his career home run count to 683. Pinch-hitting for Nolan Arenado with St. Louis up 11-0 in the fifth inning, Pujols launched a 425-foot drive off the left-field rotunda.

The 42-year-old slugger added a three-run homer in the ninth off Pirates infielder Josh VanMeter in the ninth. Pujols is fifth on the all-time homer list, 13 behind Alex Rodriguez in fourth, and his 32 at PNC Park are the most by an opposing player.

Exactly a week after Pujols took the mound for the first time in his big league career, Molina got his turn with St. Louis ahead 18-0. Pujols was behind the plate to warm up his longtime teammate in-between innings.

A perennial All-Star and Gold Glover at catching pitches, the 39-year-old Molina didn’t do quite as well throwing them. He gave up a solo homer to Yoshi Tsutsugo and a three-run drive by Jack Suwinski.

Overall, Molina allowed four hits in his one inning, throwing 14 of 20 pitches for strikes, without a strikeout or walk. Pujols also permitted four runs and two homers in one inning while finishing out a rout of San Francisco last Sunday night.

After Matz exited, Angel Rondón (1-0) entered to strike out Ke’Bryan Hayes with his first pitch. Rondón allowed just one hit in five innings for his first win in the majors, striking out four and walking three.

After being recalled from the taxi squad before the game, Rondón made his third major league appearance and first since June 12, 2021.

Highly touted prospect Nolan Gorman doubled in the first, putting the Cardinals ahead with his first major league RBI. He got three hits and went 5 for 10 with two doubles in his first series in the majors

Tommy Edman also had three of the Cardinals’ 20 hits. He hit two doubles and helped key a six-run second against Bryse Wilson (0-3).

Harrison Bader also homered off VanMeter, who made his first pitching appearance in the majors and gave up five runs in the ninth. Usually a second baseman and outfielder, VanMeter was pressed into duty as a catcher for the first time in an emergency situation.

Cardinals LHP Matthew Liberatore was optioned to Triple-A Memphis. He gave up four runs on seven hits with three strikeouts and two walks in 4 2/3 innings during his major league debut Saturday.

Pirates SS Kevin Newman had a setback while rehabbing a left groin strain with Triple-A Indianapolis. The new injury is in the hamstring area, general manager Ben Cherington said.

Cardinals: RHP Miles Mikolas (3-2, 1.68) will take the mound Monday as St. Louis heads home for the first of two games against the Toronto Blue Jays. Mikolas has not allowed more than two earned runs in eight starts this season.

Pirates: RHP JT Brubaker (0-4, 5.50) is expected to start Monday in the first of a three-game set against the Colorado Rockies. His most recent win came Aug. 24 of last season.

Denial of responsibility! Verve Times is an automatic aggregator of the all world’s media. In each content, the hyperlink to the primary source is specified. All trademarks belong to their rightful owners, all materials to their authors. If you are the owner of the content and do not want us to publish your materials, please contact us by email – [email protected]. The content will be deleted within 24 hours.
Athlete healthAthlete injuriesBaseballBryse WilsonHarrison BaderJ.T. BrubakerJack SuwinskiJosh VanMeter
0
Share FacebookTwitterGoogle+ReddItWhatsAppPinterestEmail