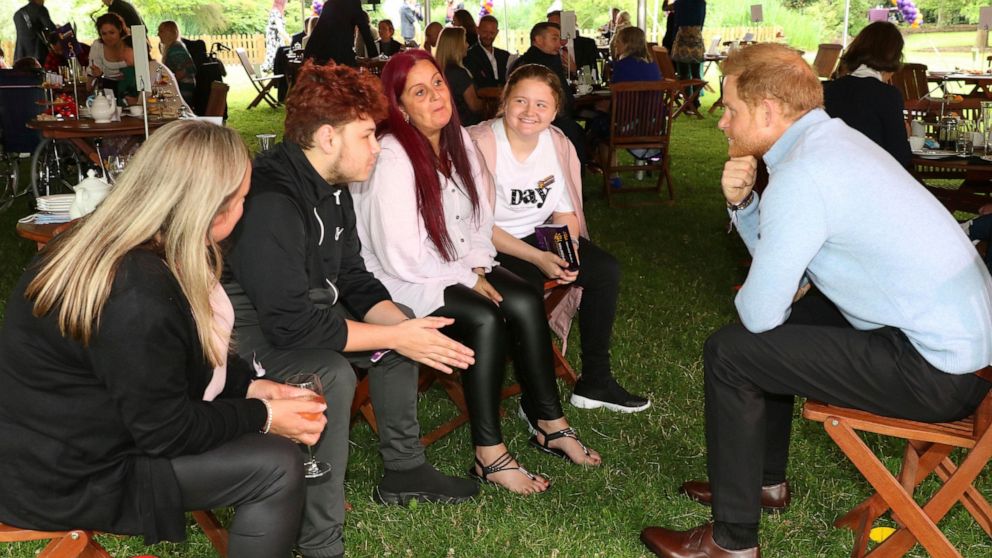 LONDON — Prince Harry has made a surprise appearance at a London charity event to meet with seriously ill children.

The Duke of Sussex is back in Britain and is due to join his brother, Prince William, to unveil a statue Thursday in honor of their late mother, Princess Diana, on what would have been her 60th birthday.

On Wednesday, Harry visited Kew Gardens in west London for an awards ceremony for WellChild, a charity he is patron of. He was joined at the garden party by celebrities including Ed Sheeran and Ronnie Wood.

He chatted with children who won awards and their families, and was seen telling some of those attending that it was “quite a juggle” coping with his newborn daughter, Lilibet, and his 2-year-old son, Archie.

In a statement released by WellChild, Harry said the charity had “an extraordinarily special place in my heart.”

“Now as a father of two, I feel all the more connected, inspired and in awe of the resilience of these families, who power through indescribable challenges with the support of WellChild,” he said.

Harry and his wife, Meghan, the Duchess of Sussex, stepped down from royal duties last year and the couple are now living in California with their children. He last visited the U.K. for the funeral of his grandfather, Prince Philip, in April.

Harry and William commissioned the statue of their mother in 2017 to honor her legacy. The monument will be unveiled Thursday in Kensington Palace, the royals’ childhood home.

Denial of responsibility! Verve Times is an automatic aggregator of the all world’s media. In each content, the hyperlink to the primary source is specified. All trademarks belong to their rightful owners, all materials to their authors. If you are the owner of the content and do not want us to publish your materials, please contact us by email – [email protected]. The content will be deleted within 24 hours.
Arts and entertainmentCelebrityCharity fundraisingEd SheeranenglandEntertainmentGeneral newsLondon
0
Share FacebookTwitterGoogle+ReddItWhatsAppPinterestEmail

It’s The Tesla Era, Even If GM Started It: EV Timeline, Pt. 3