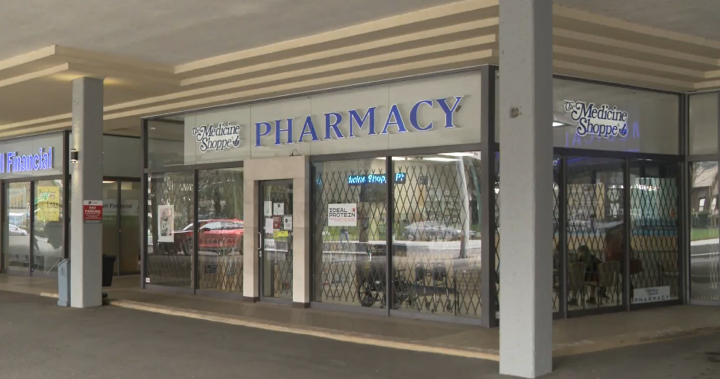 A British Columbia pharmacy has seen its access to PharmaCare suspended, as it faces an investigation over allegations it was entering people in the COVID-19 vaccine system without actually giving them the shots.

Being entered into the provincial database as vaccinated would allow a person to download the BC Vaccine Card, which remains necessary to access a variety of non-essential services until April 8.

On Thursday, a sign was posted on the door of the Medicine Shoppe at 4277 Kingsway saying the pharmacy was not dispensing drugs.

‘Abhorrent’: Fraudsters pay Downtown Eastside residents to get vaccinated in their place

B.C. Health Minister Adrian Dix said he’d been informed “some time ago” that there were issues with the pharmacy, and that the province had taken action pending the outcome of an investigation.

“Today, officials in the Ministry of Health revoked the ability to bill under PharmaCare under the Pharmaceutical Services Act,” Dix said Thursday.

The rare suspension from the PharmaCare billing system severely restricts a pharmacy’s ability to dispense drugs.

Dix stressed that the investigation was into the specific pharmacy location in Burnaby, not the chain to which it belongs.

“That’s a significant step and speaks to the level concern we have, because I don’t recall in recent times doing that as minister of health,” Dix added.

“If the concerns are confirmed, then obviously it will be very serious for the people involved,” Dix added.

The allegations have not been proven, and Dix said he was awaiting the outcome of the investigation.

He said should the investigation turn up evidence of wrongdoing, those at fault could face discipline from the College of Pharmacists of B.C., or if there is evidence of criminality, the police.

The College of Pharmacists of British Columbia said it could not comment on the matter.

In a statement, the BC Pharmacy Association said it supported the investigation into what it called “serious allegations.”

“The integrity of B.C.’s vaccine program is extremely important to the BC Pharmacy Association,” said spokesperson Angie Gaddy.

“The COVID-19 vaccine helps keep our communities safe. British Columbians should know that when an individual is identifying themselves as fully vaccinated, that they are indeed fully vaccinated.”

The investigation was triggered when health officials noticed an unusual number of people travelling long distances to be vaccinated at the pharmacy.

Dix said the case was an example of oversight of the vaccine system working as intended to flag potential misconduct.

Denial of responsibility! Verve Times is an automatic aggregator of the all world’s media. In each content, the hyperlink to the primary source is specified. All trademarks belong to their rightful owners, all materials to their authors. If you are the owner of the content and do not want us to publish your materials, please contact us by email – [email protected]. The content will be deleted within 24 hours.
bc coronavirusbc covidbc covid updatebonnie henry updateCOVIDcovid 19 bccovid-19COVID-BC
0
Share FacebookTwitterGoogle+ReddItWhatsAppPinterestEmail