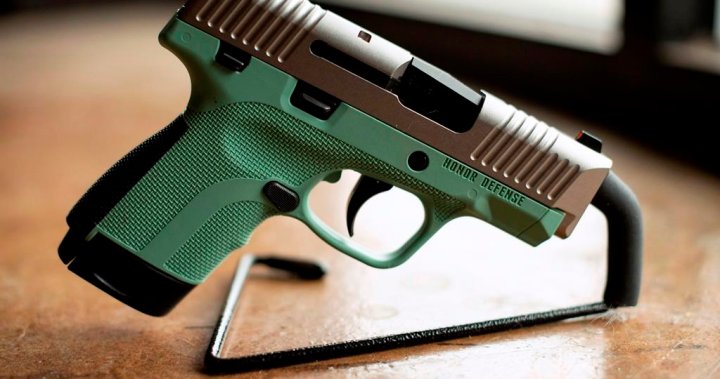 Ottawa is moving to freeze handgun sales nationwide. Here’s what that means – National

The federal government on Monday announced it has tabled legislation that seeks to freeze the buying, selling, importing and trading of handguns nationwide.

The move is among several firearm-control measures in the new Bill C-21, which also targets gun smuggling and trafficking as well as domestic abusers who own firearms, among other restrictions. The bill will also increase penalties for firearm-related offences.

“This is not an easy thing to do, but we all agree it is the responsible thing to do,” Prime Minister Justin Trudeau said while announcing the new measures.

“Other than using firearms for sport shooting and hunting, there is no reason anyone in Canada should need guns in their everyday lives.”

The new bill expands and strengthens the previous Bill C-21, which failed to pass Parliament before the last federal election, and addresses some of the concerns raised by experts and gun safety advocates over that legislation.

Here’s a look at what will happen if the proposed changes become law.

The bill would amend the Firearms Act to prevent most individuals from buying, selling or transferring handguns, and chief firearms officers would be prevented from approving the transfer of a handgun to those individuals.

Only those with an authorization to carry certificate from a chief firearms officer — including valuable goods carriers — or elite sport shooters in an Olympic or Paralympic-approved discipline will be exempt from the national freeze.

Businesses will still be allowed to sell and transfer handguns to other businesses, such as museums or within the entertainment industry.

Those who already own handguns will still be allowed to continue possessing and using those firearms. However, they will only be allowed to transfer those handguns to businesses or exempted individuals. Otherwise, they will be required to dispose of them lawfully.

Public Safety Minister Marco Mendicino has already tabled regulatory amendments in Parliament to ensure the national freeze on handguns can be implemented swiftly, the government said in a news release.

“These regulations will help stop the growth of personally owned handguns in Canada and are expected to come into force in fall 2022.”

Government officials later said they don’t anticipate a major surge in handgun purchases in anticipation of the freeze becoming law.

The freeze effectively bans new handguns across the country, a move that was not anticipated to be part of the bill. The Liberals had previously promised to work with provinces and territories that sought a ban, which gun control advocates have said would create an ineffective patchwork of rules across Canada.

Handguns present in most firearm-related violent crimes in Canada: report

Although Trudeau last week defended that approach due to “a range of opinions and views across the country,” he said Monday that the government realized it was not enough.

“In our discussions with law enforcement, advocates and experts, it became apparent that we needed a different solution,” he said. “So we decided to take a new route, something to tackle this issue at a national level.”

The number of registered handguns in Canada increased by 71 per cent between 2010 and 2020, reaching approximately 1.1 million, according to federal statistics. Handguns were the most serious weapon present in the majority of firearm-related violent crimes between 2009 and 2020.

Bill C-21 seeks to amend the Criminal Code to create a new “red flag” law allowing courts to require that people considered a danger to themselves or others surrender their firearms to police. Judges will also be able to issue a 30-day emergency order requiring third parties to not provide firearms to those individuals.

The government says the measure would guard the safety of those applying through the court process, often women in danger of domestic abuse, by protecting their identities. The decision to shield identities would be up to a judge’s discretion.

Several women’s groups recently implored the government to do away with the “red flag” provision as written in the previous Bill C-21, which did not include the provision allowing for identities to be protected.

3:37
How more gun tracing can help Canada clamp down on cross-border trafficking

How more gun tracing can help Canada clamp down on cross-border trafficking – May 20, 2022

The new bill will also create a “yellow flag” law allowing chief firearms officers to temporarily suspend an individual’s gun licence if they “receive information calling into question their licence eligibility,” according to a government briefing.

That would prevent those individuals from using or purchasing guns while the officer assesses whether to revoke the licence. The licence would be immediately reinstated if the information leading to the suspension is “eliminated.”

The bill would also allow for the automatic removal of gun licences from people committing domestic violence or engaged in criminal harassment, such as stalking. Anyone who is currently or previously subject to a protection order would also be denied a licence.

The government says individuals could still apply for a conditional licence if they need a firearm for sustenance hunting or for their employment.

The bill would create a new Criminal Code offence for altering a cartridge magazine to hold more than its lawful capacity, with a maximum penalty of five years in prison.

In addition, a new regulation introduced alongside Bill C-21 will require long-gun magazines to be permanently altered so they can never hold more than five rounds.

The regulation will also prohibit the sale and transfer of magazines capable of holding more than the legal number of rounds.

The bill will further amend the Criminal Code to ensure the importing, exporting and sale of all unregulated airguns that look like regulated firearms is prohibited.

Current owners will be allowed to keep and use airguns they already own, but will not be allowed to transfer them to another individual.

The proposed law will also allow manufacturers and retailers to keep selling these airguns, but only if their designs are altered so they don’t look like real firearms.

The government says airguns and other “firearm-like” weapons were used in nearly a quarter of all gun-related crime in 2020, tying them with rifles and shotguns.

The new Bill C-21 is also aimed at deterring gun smuggling and trafficking, which data suggests is behind a majority of gun-related crime in Canada.

If passed, the law would increase maximum penalties for those crimes from 10 years in prison to 14 years.

It would also require anyone importing ammunition to present a firearms licence, and add unlawful possession of unauthorized and prohibited firearms to the list of offences deemed eligible for wire-tapping.

The bill will also give the Canada Border Services Agency responsibility to crack down on trans-border criminality and to deem foreign nationals inadmissible for committing crimes in Canada, transferring that authority away from the immigration ministry into public safety.

Two years ago the government announced a ban on over 1,500 models and variants of what it considers assault-style firearms.

The Liberals plan to introduce a mandatory buyback program before the end of this year to offer compensation to affected owners and businesses. Bill C-21 removes language from the previous version of the bill that would have allowed non-permissive storage of those weapons.

The government promised Monday to ensure such firearms are automatically prohibited when they enter the market in future.

“We will continue working to ensure any new weapons that fit the definition of assault-style weapon are captured,” Mendicino said.

—With files from the Canadian Press

Denial of responsibility! Verve Times is an automatic aggregator of the all world’s media. In each content, the hyperlink to the primary source is specified. All trademarks belong to their rightful owners, all materials to their authors. If you are the owner of the content and do not want us to publish your materials, please contact us by email – [email protected]. The content will be deleted within 24 hours.
CanadaCanada gun controlCanada handgun banCanada. NewsFirearmsGun controlGun Control BillGun Control Canada
0
Share FacebookTwitterGoogle+ReddItWhatsAppPinterestEmail

No star is quite like McDavid. At last, he’s on a stage the whole hockey world will watch

Will Smith ‘understands’ if people aren’t…