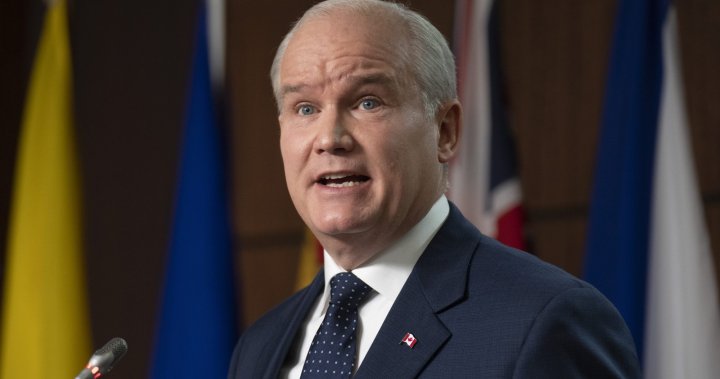 Erin O’Toole faced restive MPs and grassroots questions about his leadership on the first day of a Conservative caucus retreat — and worse could be yet to come Thursday when MPs are presented with a long-awaited post mortem on the party’s election loss.

Wednesday marked the first time O’Toole has met with his team this year as he continues dealing with calls for his leadership to be reviewed and some in caucus questioning his ability to even do the job.

Among things discussed behind closed-doors was Quebec’s controversial secularism law, which O’Toole is under pressure from some MPs to take a tougher stand against.

Another Conservative riding calls for vote on O’Toole’s leadership

As well, Conservatives discussed the convoy of truckers and others opposed to public health restrictions to curb the spread of COVID-19 rolling towards Ottawa to protest the federal government’s vaccine mandate for cross-border truck drivers.

Many of O’Toole’s MPs, including deputy leader Candice Bergen, have expressed full-throated support for the truckers’ protest, with some saying they will attend. Their endorsements come even as concerns are being raised about individuals pushing more extreme — and even violent — ideas tagging along with the group.

“We have to make sure that everything is peaceful,” O’Toole told reporters Wednesday evening as left the caucus meeting, where he confirmed the convoy was discussed.

“Peaceful is the priority.”

On the eve of the Conservatives’ retreat, the divisions O’Toole faces were reinforced when one of the party’s riding associations in Saskatchewan — where the Tories hold all 14 seats — passed a resolution requesting his leadership be reviewed by mid-June instead of waiting until a scheduled vote at the next national convention in 2023.

“We are representing our members who have concerns about the policy direction that the current leadership is taking the party,” Levi Derksen, president of the Carlton Trail-Eagle Creek riding association, said in a statement.

Derken said the riding’s Conservative MP, Kelly Block, wasn’t involved in the motion at all.

The party has so far rejected calls to move up the date of the review, saying 2023 was decided by near unanimous consent.

Asked about the idea of an early leadership vote Wednesday, Alberta MP Garnett Genuis, who serves as O’Toole’s critic for international development, said he was “looking forward to the discussions that are going to continue to happen over the next few days.”

“I’m confident that they’ll be good opportunities for discussions about a variety of different issues and we’ll see those discussions go,” he said.

Among the concerns expressed from within caucus and members more broadly are O’Toole’s shift on policies from the carbon tax to gun control and conscience rights.

There are also worries his strategy of growing the party by striking a more moderate approach on social issues and deficit spending resulted in the loss of some traditional Conservative voters in a failed bid to pick up seats in Ontario and the suburbs.

Hann said caucus will be briefed on the contents of the review, including its key findings and recommendations, and will have a chance to ask questions of the author.

Part of the presentation will also focus on O’Toole’s performance during the campaign — something those concerned about his leadership are eager to see.

But the party wouldn’t specify whether caucus will be shown the review in its entirety. Hann said only that O’Toole committed to elected members receiving a briefing. He added that past campaign reviews were not shared beyond the party leaders and their senior staff.

Heading into Wednesday’s meeting, Conservative MP Marilyn Gladu said, as someone who appreciates details, she’d like to see the complete review but is expecting a summary.

Alberta MP Glen Motz said he’s confident in his former colleague’s ability to handle the review and said he was “sure we’ll see the information that we require.”

Ginny Roth, a vice-president at public relations firm Crestview Strategy and conservative activist, said she doesn’t think it’s wise for a political party to make public the mechanics of how they run a campaign.

The report will suggest what needs to change, she said, and O’Toole will want to show he has a plan.

“It’s hard for him to focus on what he needs to be focusing on with the public and with voters if he doesn’t have the confidence of his caucus and members, and the report coming in is a moment for him to kind of solidify that support,” she said.

“It’ll all come down to whether in that brief, he’s able to convey to the different caucus members with different priorities, that they all have a place within his caucus and within his party.”

Denial of responsibility! Verve Times is an automatic aggregator of the all world’s media. In each content, the hyperlink to the primary source is specified. All trademarks belong to their rightful owners, all materials to their authors. If you are the owner of the content and do not want us to publish your materials, please contact us by email – [email protected]. The content will be deleted within 24 hours.
CanadaCanada election 2021Canada PoliticsCanada. NewsConservative Caucusconservative caucus retreatConservative Party leadershipConservatives
0
Share FacebookTwitterGoogle+ReddItWhatsAppPinterestEmail