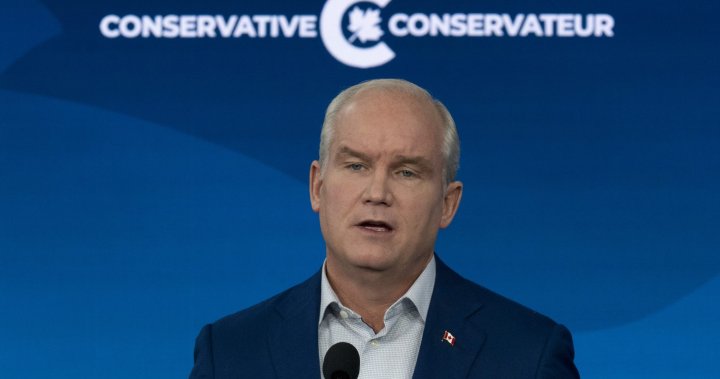 An email to MPs obtained by Global News shows O’Toole’s office asked MPs on Thursday to refrain from commenting on a proposal to redistribute the federal ridings. The issue promises to be a contentious one, with Quebec slated to lose one seat based on population, and the Bloc Quebecois promising to release the “fires of hell” over the possibility.

Alberta, meanwhile, would gain three seats, presenting a difficult problem for a Conservative leader who hopes to gain ground in Quebec while maintaining the party’s prairie heartland.

So the Office of the Leader of the Opposition (OLO) suggested Conservative MPs direct any media requests for comment to their communications team, rather than have MPs express their own opinions. Two sources verified it had been sent to the Conservative caucus Thursday.

“The OLO keeps on putting out messages to caucus saying ‘please don’t respond to media inquiries on x, y and z’ … and then complete silence, please do not respond and direct all media inquiries to OLO,” said one Conservative MP, who agreed to discuss the matter on the condition of not being named.

The MP said it was not the first time O’Toole’s office had tried to prevent the Conservative caucus from commenting on political issues publicly.

“Caucus, number one, doesn’t know what OLO is going to say. But number two, OLO doesn’t say anything and we’re all supposed to play their game of: no one moves, no one gets hurt.”

Efforts by O’Toole’s office to control the message have proven difficult this week. The Hill Times revealed Thursday evening that a group of like-minded Conservative MPs and senators had formed a “civil liberties” caucus to speak up for unvaccinated Canadians who could lose their jobs.

Sarnia-Lambton MP Marilyn Gladu, the only identified member of the group that reportedly numbers between 15 and 30 members, told the Ottawa newspaper it would stand up for workers who refuse to be vaccinated. Reached by Global News Friday, Gladu said the group is “absolutely not” about challenging O’Toole on the issue.

“This group is about working as MPs for our constituents and addressing the concerns they’re raising,” said Gladu, who added she’s not revealing her vaccination status as a matter of principle.

It’s not unusual for members of a party caucus to coalesce into groups devoted to certain issues, but the ‘civil liberties’ caucus cropped up at a time O’Toole and his team were hoping to put perceptions that the Conservatives harboured anti-vaxxers behind them.

It renewed questions about O’Toole’s control over the Conservative caucus after September’s disappointing federal election results.

Global News reported this week Conservative MPs are in “wait and see” mode as O’Toole plots his next steps. But it’s been heavy on the “waiting” side, with O’Toole largely silent on pressing political issues like rising inflation and the Liberals’ plans to cap emissions from the oil sands.

One MP, who supports O’Toole, told Global News there is a “Get Rid of Erin” faction within the Conservative caucus. But even MPs who want O’Toole gone can’t say how big that faction actually is.

Multiple sources inside caucus and within the broader conservative movement acknowledge O’Toole is left with few options. If the Conservative leader disciplines MPs who step out of the party line, he would risk inflaming the caucus faction opposed to his leadership.

Aside from a position in shadow cabinet, O’Toole has few boons to bestow. One source agreed the Conservative leader lacks both carrots and sticks.

But O’Toole is not facing anything like the chorus of off-the-record operatives that dogged former leader Andrew Scheer after the 2019 election. There does not appear to be an organized opposition attempting to push O’Toole to the door.

That fact, along with time — O’Toole is not scheduled to face a leadership review until the party’s 2023 convention — works in the Conservative leader’s favour, although message discipline between now and then could prove elusive.

Denial of responsibility! Verve Times is an automatic aggregator of the all world’s media. In each content, the hyperlink to the primary source is specified. All trademarks belong to their rightful owners, all materials to their authors. If you are the owner of the content and do not want us to publish your materials, please contact us by email – admin@vervetimes.com. The content will be deleted within 24 hours.
CanadaCanadian PoliticsCivil libertiesConservative LeadershipConservative PartyConservative Party of CanadaConservativesConservatives Vaccinated
0
Share FacebookTwitterGoogle+ReddItWhatsAppPinterestEmail