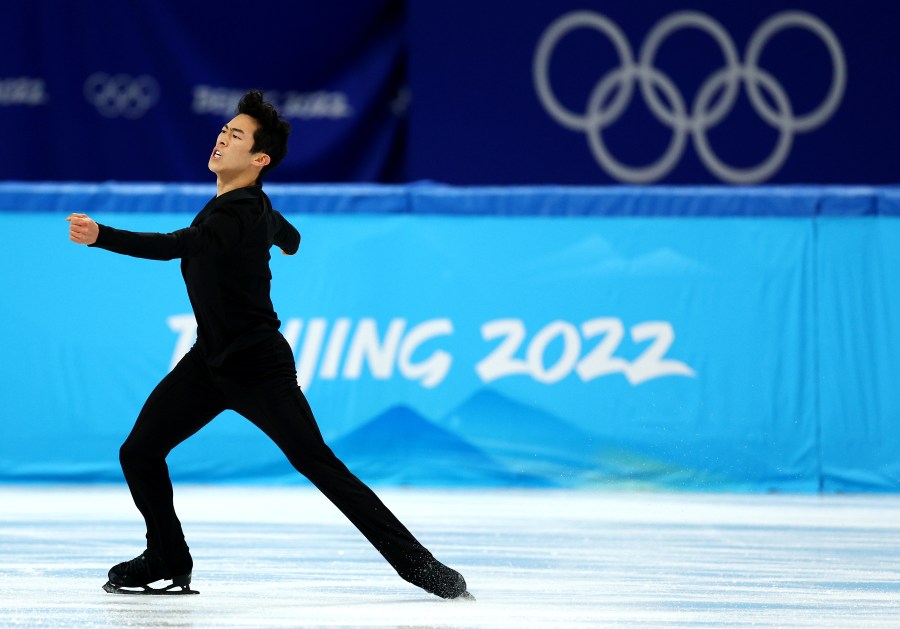 BEIJING (A.P.) — It was supposed to be a foregone conclusion that Russia’s powerful stable of figure skaters, including world champions in three of the four disciplines, would run away with the team gold medal at the Beijing Olympics.

Nathan Chen and the rest of the Americans must have taken exception.

The three-time world champ’s winning short program set the tone for Team USA on Friday, and everyone else followed suit. Madison Hubbell and Zachary Donohue won the rhythm dance with a season-best score. Alexa Knierim and Brandon Frazier capped the first of three days of team competition with a personal-best short program.

That left the Americans with 28 points, two ahead of the Russians and seven ahead of third-place China.

“We can walk away with a medal for sure. What color? It’s hard to say,” Chen said. “But I have faith in my teammates, and I know they’re going to do the best they can do.”

The only discipline they didn’t win was pairs. Knierim and Frazier were third behind China’s Sui Wenjing and Han Cong, who set a world record with their short program, and Russians Anastasia Mishina and Aleksandr Galliamov.

“I’m so proud of us,” said Knierim, who helped the U.S. win team bronze four years ago in Pyeongchang. “I mean, there was a lot of push-down pressure within us. We just tried to ignore it, and we just rose to the occasion.”

There is still plenty of work to do for the Americans to climb the podium this time around.

The team event takes a break Saturday before the women’s short program Sunday, where the Russians will again be the favorites. After that, the top-five scoring nations advance to the free skates, with the medals decided Monday night.

Chen struggled to a fourth-place finish with his short program in the team event in Pyeongchang, and the dismal start to his Olympic debut four years ago carried right into the men’s event. His short program there was so strewn with mistakes that not even his brilliant free skate could land him on the podium.

Perhaps his flawless start in Beijing will send him in the other direction.

Performing to music from the Puccini opera “La Bohème,” Chen opened with a massive quad toe loop and landed the triple axel that often gives him problems. By the time he landed his quad salchow-triple toe loop combination, his technical mark was so far ahead of the field that first place was just about assured.

Officials ramping up security measures ahead of Super Bowl LVI

Chen received 111.71 points, a mark that would have won the men’s short program in Pyeongchang, and one that put him well clear of reigning Olympic silver medalist Shoma Uno of Japan on Friday.

“Even if someone doesn’t have the best skate, we have an incredibly strong team to back us all up,” Chen said. “That’s certainly the case this time around. I’m happy I did my part and skated as good as I can.”

Oh, did he ever have someone backing him up!

After a disappointing showing of their short program at nationals, Hubbell and Donohue were perfectly in sync for the Americans on skating’s biggest stage, scoring a season-best 86.56 points for their Janet Jackson medley.

“It’s always better to give a great performance and to leave that impression with the judges,” Hubbell said, “But we also know that everything is dependent on how you perform each day and each time you step on the ice.”

World champions Victoria Sinitsina and Nikita Katsalapov were the last ice dance duo to skate, but their program began to go awry during their twizzles. It briefly fell apart when Katsalapov stumbled during their midline step sequence, a mistake that left them in second place with 86.06 points.

“We are very confident,” Katsalapov insisted afterward, “because we have the strongest team.”

Perhaps. But not on Friday.

Knierim and Frazier punctuated a big day for the Americans. From their opening triple twist lift to their often troublesome triple toe loop, they made everything look easy just weeks after Frazier’s positive COVID-19 test forced them to withdraw from nationals.

Meanwhile, Germany and Ukraine had their chances of advancing dashed before they even stepped on the ice.

The two nations did not have a backup for their disciplines, so they received no points in the team event.

“Nolan is so far symptom-free,” said Hase, who was released from quarantine after testing negative. “Of course, it was a shock for me as well. We were careful. I struggle a bit right now. I will try to get back on track in the next days.”

Hypertension diet: Adding dietary pulses is an effective way to lower your reading