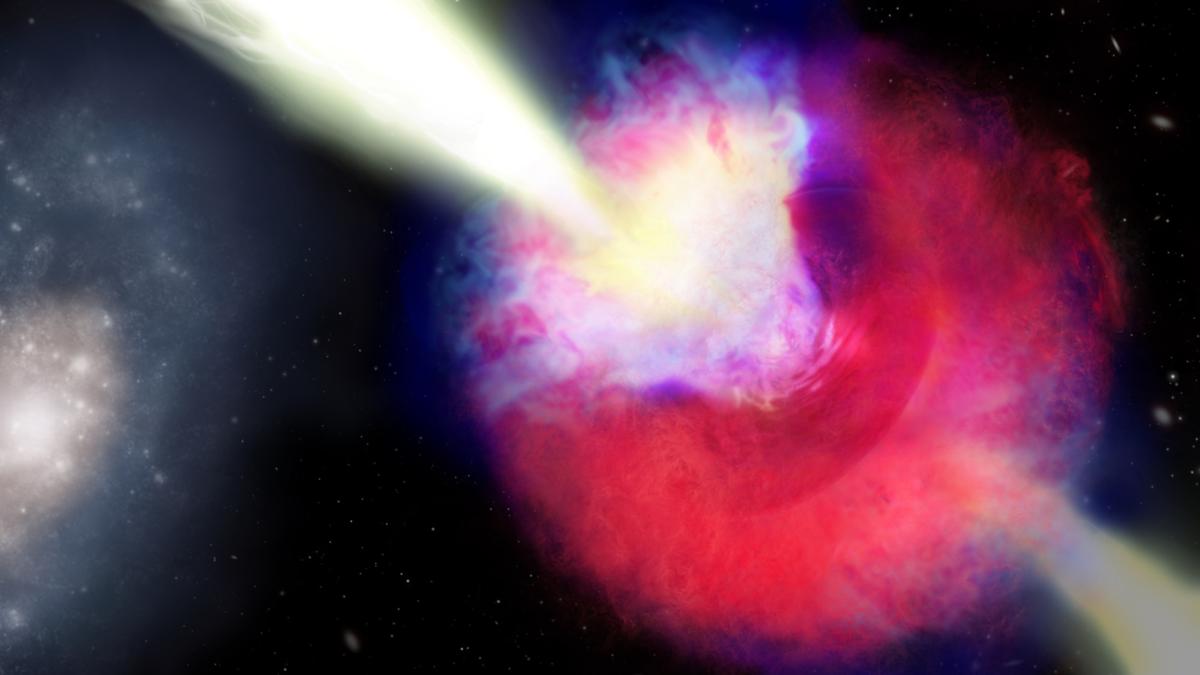 NASA Observatory: Earth hit by ‘unusual’ and ‘intense’ blast of energy from nearby galaxy

Earth has been hit by an extremely rare and massive blast of light from a nearby galaxy, scientists have revealed.

A new study, led by Jillian Rastinejad at Northwestern University in the US state of Illinois discovered late last year the Earth was hit by a 50-second-long blast of energy.

The blasts, known as a gamma-ray burst or GRB, are the most powerful explosions in the universe.

But, Rastinejad says the study of these rays could change the way we understand our universe.

“This event looks unlike anything else we have seen before from a long gamma-ray burst,” Rastinejad said.

“Its gamma rays resemble those of bursts produced by the collapse of massive stars.

“Given that all other confirmed neutron star mergers we have observed have been accompanied by bursts lasting less than two seconds, we had every reason to expect this 50-second GRB was created by the collapse of a massive star.

Rastinejad said the study may challenge our understanding of where such long-lasting GRBs come from.

However, it could also provide an exciting way to answer other questions about the universe.

The galaxy from which the ray came is also strange, the study suggests, as it is young and still forming stars – the opposite of the only other known nearby galaxy that has played host to this sort of event.

But because the galaxy which produced this huge ray is relatively nearby, scientists were able to get a rare look at it.

Among other findings, they also found the event had produced heavy elements that amounted to roughly 1000 times the mass of our Earth.

“When we followed this long gamma-ray burst, we expected it would lead to evidence of a massive star collapse,” said Northwestern’s Wen-fai Fong, a senior author on the study.

“Instead, what we found was very different. When I entered the field 15 years ago, it was set in stone that long gamma-ray bursts come from massive star collapses.

“This unexpected finding not only represents a major shift in our understanding, but also excitingly opens up a new window for discovery.”

Denial of responsibility! Verve Times is an automatic aggregator of the all world’s media. In each content, the hyperlink to the primary source is specified. All trademarks belong to their rightful owners, all materials to their authors. If you are the owner of the content and do not want us to publish your materials, please contact us by email – [email protected]. The content will be deleted within 24 hours.
NewsScienceSpaceTechnologyWorld News
0
Share FacebookTwitterGoogle+ReddItWhatsAppPinterestEmail

deGrom: Rangers made ‘me feel like they really wanted me’

How Celebrities Get Their Hair And Makeup Done For The…