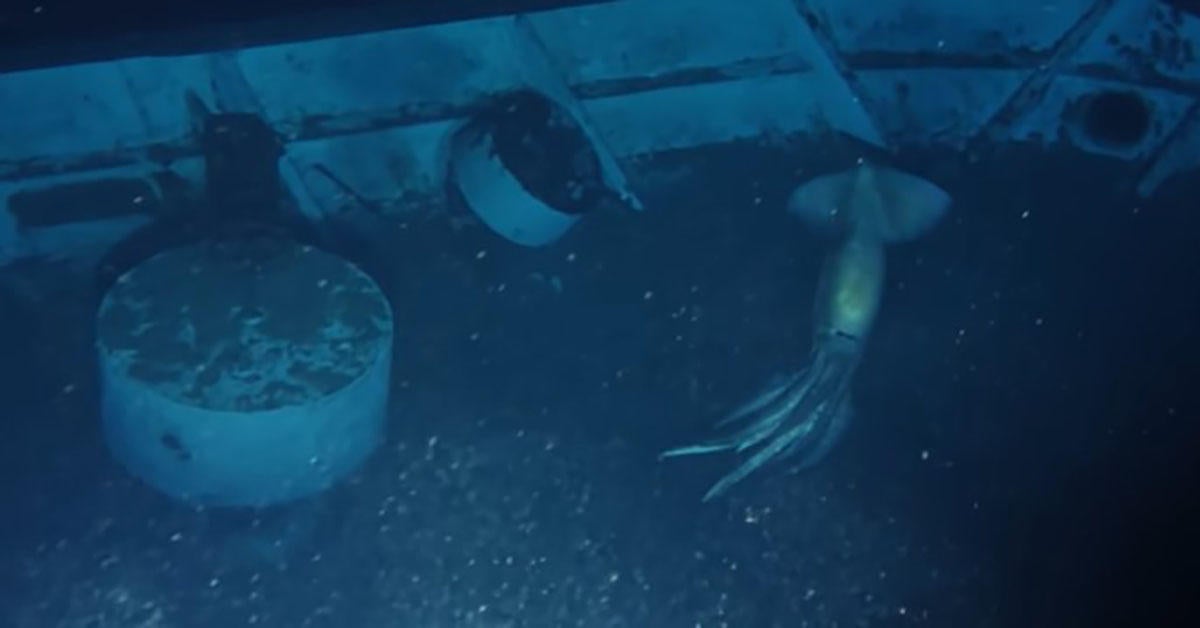 Given the sheer size of the ocean, it’s no surprise that there are creatures in the deep that are mysterious, but it’s a little unusual for those mysterious creatures to be caught on camera. But that’s exactly what happened to the crew of the OceanX OceanXplorer research vessel during an expedition in the Red Sea in 2020. While examining the wreckage of a passenger ship, cameras caught one such mystery creature and now, OceanX is sharing a video of the encounter as well as the identification of the creature.

In the video (via CNET), the massive creature is seen in the vicinity of the wreck of the Pella at a depth of nearly 2800 feet. However, while the creature looks like a giant squid, it turns out it’s another type of squid, as identified by zoologist and squid expert Mike Vecchione: a very large purpleback flying squid.

“I can tell you what I think it is and why I think it is,” Vecchione said in the video. “I think it’s a species called the purpleback flying quid. And in the area that you’re operating, in the Red Sea, there’s a well-known population of those. They get really big. I think what you’re seeing is what’s called the giant form of Sthenoteuthis. They will approach a bait the way that that one approached that bait and they often swim the way that the other videos showed the animal swimming. And in particular, the fin size, the proportions of the fin relative to the body, show me that it’s not a giant squid. If you stop it right there, you see it’s got fins that are short and broad and sort of thicken together. They look like sort of an arrowhead. I know that you probably wanted to think that you had some video of giant squids, but I can tell you but I’m absolutely certain it’s not an Architeuthis dux.”

Giant squid are somewhat legendary creatures of the sea and until 2004 had never been photographed or filmed alive in their natural habitats. While the first image of a live mature giant squid was taken in 2002 in Japan, the creature was found near the surface and died soon after. The first photographs of a giant squid in its natural habitat were taken in 2004 600 miles south of Tokyo. The first video was taken in 2006 and most recently, a video was taken by the National Oceanic & Atmospheric Association in the Gulf of Mexico in 2019.

Despite the squid in the OceanX not being the fabled Giant Squid, the purpleback flying squid is still a fascinating creature to catch on camera – and was certainly unexpected on the OceanX expedition.

What do you think about the giant size purpleback flying squid showing up in OceanX’s video? Let us know your thoughts in the comments.

Denial of responsibility! Verve Times is an automatic aggregator of the all world’s media. In each content, the hyperlink to the primary source is specified. All trademarks belong to their rightful owners, all materials to their authors. If you are the owner of the content and do not want us to publish your materials, please contact us by email – [email protected]. The content will be deleted within 24 hours.
giant squidkrakenoceanxScienceseasea creatureSquid
0
Share FacebookTwitterGoogle+ReddItWhatsAppPinterestEmail

Ariana Grande to give away £3.6m in free therapy: ‘I acknowledge that there are very real barriers’

Putin ‘afraid’ of backlash but may still invade…

Crossword roundup: if you hate the word ‘vinyls’, wait till…

Why am I always tired? Five reasons you could be feeling…

Bills vs. Chiefs by the numbers: Breaking down the wildest…

Banjo-Kazooie Is the N64’s Scariest Game