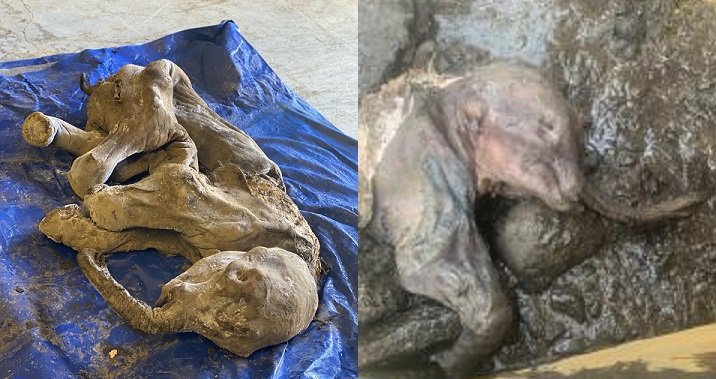 A mummified baby woolly mammoth has been found in the Klondike gold fields, the Yukon government announced Friday.

It said the animal found within Tr?ondek Hwech?in Traditional Territory earlier this week is the most complete and best preserved mammoth found in North America to date.

The territory said miners working on Eureka Creek uncovered the animal while excavating permafrost on Tuesday.

Geologists from the Yukon Geological Survey and University of Calgary who recovered the mammoth suggest it died and was frozen during the ice age, more than 30,000 years ago.

Ice age paleontologist Grant Zazula said it has been his lifelong dream to “come face to face with a real woolly mammoth” and he is excited to find out more about the animal.

“The discovery of a mummified baby animal is something totally unprecedented. Mummified remains of Ice Age animals are incredibly rare in the world,” he said in an interview Friday.

Zazula, who has been studying the ice age for nearly 25 years, said the mammoth is about 140 centimetres long. Early examinations also suggest it is female and was about a month old when it died, he said.

“She has an incredible scientific discovery,” he said. “She has her hair, her skin and, if you look at her feet, she has tiny little fingernails and toenails that haven’t quite hardened yet.”

“I’m excited about what this may mean scientifically but I’m more excited about how this mammoth will help the Tr?ondek Hwech?in community,” Zazula said. “I’m just really honoured and humbled to be part of this.”

Denial of responsibility! Verve Times is an automatic aggregator of the all world’s media. In each content, the hyperlink to the primary source is specified. All trademarks belong to their rightful owners, all materials to their authors. If you are the owner of the content and do not want us to publish your materials, please contact us by email – [email protected]. The content will be deleted within 24 hours.
historymammoth calkmammoth mummymummified mammothScienceWooly MammothYukonyukon mammoth
0
Share FacebookTwitterGoogle+ReddItWhatsAppPinterestEmail