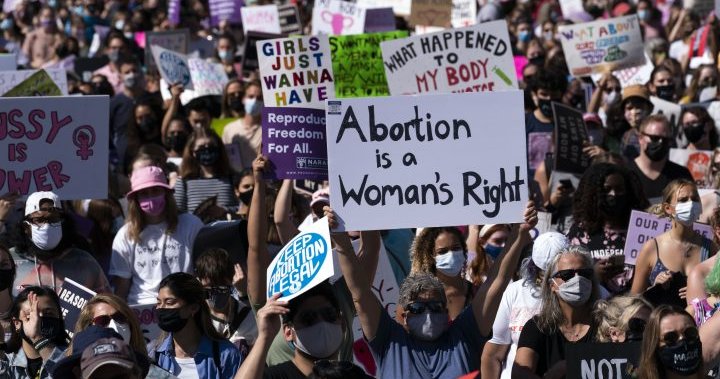 The first Women’s March of the Biden administration heads straight for the steps of the Supreme Court on Saturday, part of nationwide protests demanding continued access to abortion in a year when conservative lawmakers and judges have put it in jeopardy.

Thousands of women filled a square near the White House for a rally before the march. Many waved signs that said “Mind your own uterus,” “I love someone who had an abortion” and “Abortion is a personal choice, not a legal debate,” among other messages.

Some wore T-shirts reading simply “1973,” a reference to the landmark Roe v. Wade decision, which made abortion legal for generations of American women.

Elaine Baijal, a 19-year-old student at American University, took cellphone photos with her friends and their signs as the event started. She said her mother told her of coming to a march for legal abortion with her own mother in the 1970s.

“It’s sad that we still have to fight for our right 40 years later. But it’s a tradition I want to continue,” Baijal said of the march.

Organizers say the Washington march will be among hundreds of abortion-themed protests around the country Saturday. The demonstrations come days before the start of a new term for the Supreme Court that will decide the future of abortion rights in the United States, after appointments of justices by President Donald Trump strengthened conservative control of the high court.

The march is part of “a fight to secure, safeguard, and strengthen our constitutional right to an abortion,” Rachel O’Leary Carmona, executive director of the Women’s March, said in a statement. “And it’s a fight against the Supreme Court justices, state lawmakers, and senators who aren’t on our side _ or aren’t acting with the urgency this moment demands.”

The march comes a day after the Biden administration urged a federal judge to block the nation’s most restrictive abortion law, which has banned most abortions in Texas since early September.

It’s one of a series of cases that will give the nation’s divided high court occasion to uphold or overrule Roe v. Wade.

An opponent of women’s access to abortion called this year’s march theme “macabre.”

“What about equal rights for unborn women?” tweeted Jeanne Mancini, president of an anti-abortion group called March for Life.

The Women’s March has become a regular event _ although interrupted by the coronavirus pandemic _ since millions of women turned out in the United States and around the world the day after the January 2017 inauguration of Trump. Trump endorsed punishing women for getting abortions and made appointment of conservative judges a mission of his presidency.

Without Trump as a central figure for women of varied political beliefs to rally against, and with the pandemic still going strong, organizers talk of hundreds of thousands of participants nationally Saturday, not the millions of 2017.

Saturday’s rally featured speakers from Planned Parenthood and other advocates and providers of abortion access. Actress Busy Philipps and swimmer Schuyler Bailar are due to take part.

Security in the capital was much lighter than for a political rally a few weeks ago in support of Trump supporters jailed in the Jan. 6 insurrection. No fence was placed around the U.S. Capitol, with the Capitol Police chief saying there was nothing to suggest Saturday’s rally would be violent.

Denial of responsibility! Verve Times is an automatic aggregator of the all world’s media. In each content, the hyperlink to the primary source is specified. All trademarks belong to their rightful owners, all materials to their authors. If you are the owner of the content and do not want us to publish your materials, please contact us by email – [email protected]. The content will be deleted within 24 hours.
Abortionabortion lawsAbortion protestsAbortion RightsAccess to AbortionHealthPlanned ParenthoodPolitics
0
Share FacebookTwitterGoogle+ReddItWhatsAppPinterestEmail