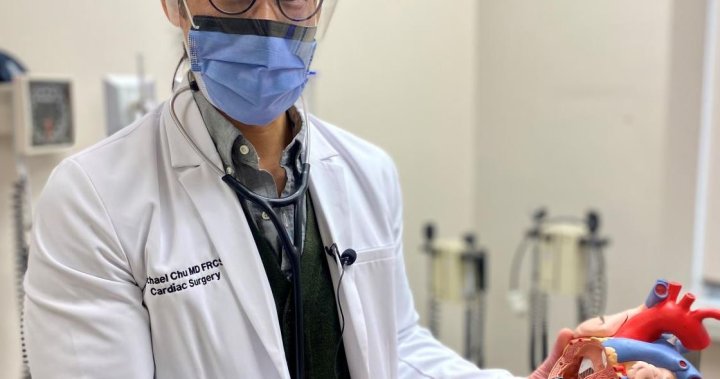 A London, Ont.,-led study involving 39 hospitals across the world and 401 cardiac patients is investigating whether a change in the way surgeons repair leaky valves in the heart could lead to better outcomes for patients.

Leaky heart valves affect roughly two per cent of the population, with many patients not even realizing the issue until they are late-stage into the disease, researchers say. The leaks can result in problems with fluid retention, shortness of breath and heart failure.

Read more:
‘People like me should have died’: Survey outlines pandemic’s impact on heart disease, stroke

“That will then lead to complications requiring hospitalization and eventually an increased risk of death,” the study’s joint first author Dr. Michael Chu said in a release.

The current practice sees surgeons repair only one of two related valves at a time, the mitral valve, under the belief that the tricuspid valve would improve on its own afterwards.

Researchers wanted to find out if surgically repairing both the mitral and tricuspid valves at the same time would lead to better outcomes for patients.

The division of cardiac surgery research team at Western University‘s Schulich School of Medicine and Dentistry “engaged in a multicentre, randomized trial run by the Cardiothoracic Surgical Trials Network” out of the National Heart, Lung, and Blood Institute in the United States.

2:19
B.C. family’s harrowing ordeal having to fly to Alberta to save their son’s life

“What we found two years after the operations was that the group that had both mitral and tricuspid repair had significantly less severe residual leak of the tricuspid valve,” said Chu, who is also the chief of the cardiac surgery division at Schulich.

“These findings suggest that concomitant tricuspid repair is extremely effective and those patients who present with a tricuspid leak should have both valves repaired at the same time.”

However, those who had both valves surgically repaired had a higher incidence of permanent pacemaker implantation, at 14.1 per cent compared with 2.5 per cent in the group that had mitral-valve surgery alone.

Lawson Health Research Institute says the study findings have been published in the New England Journal of Medicine and that the next step is to follow the patients involved in the study for five years to “further investigate various aspects of the study, with the ultimate goal of improving long-term outcomes for patients.”

Denial of responsibility! Verve Times is an automatic aggregator of the all world’s media. In each content, the hyperlink to the primary source is specified. All trademarks belong to their rightful owners, all materials to their authors. If you are the owner of the content and do not want us to publish your materials, please contact us by email – admin@vervetimes.com. The content will be deleted within 24 hours.
Cardiac Surgerydr michael chuHealthHeart Surgerylawson health research instituteLeaky Heart Valveleaky valveLondon Health Sciences Centre
0
Share FacebookTwitterGoogle+ReddItWhatsAppPinterestEmail

What Car Comes With The Weirdest Stereotypes?

Buoyed by Response to Teen Vaccination, Govt Likely to Begin…