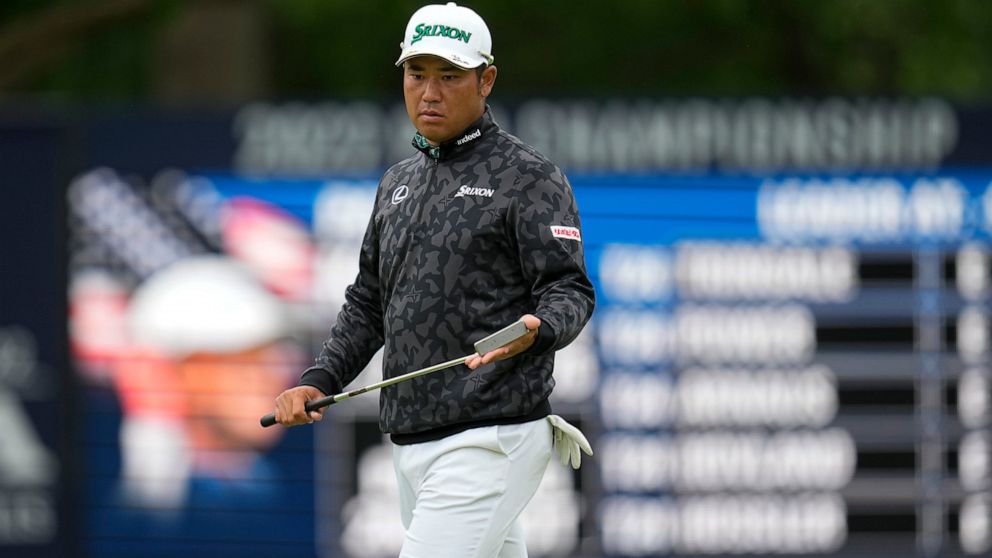 Live updates | Woods withdraws from final round of PGA

TULSA, Okla. — The Latest on the third round of the PGA Championship (all times local):

There will be no Sunday red for Tiger Woods in the PGA Championship.

The PGA of America said Woods has withdrawn. Woods had a career-high 79 in the third round Saturday at Southern Hills. He limped his way around in the cold and wind, at one point making five straight bogeys.

This is the first time Woods has withdrew from a major as a professional.

He declined interviews after his round, speaking only to a pool reporter. Woods was asked if he felt as though he would play the final round. All he said was he was sore, he would do some work and see how it went.

Woods has made the cut in the two majors he has played since his right leg was battered in a car crash 15 months ago.

Mito Pereira, the largely unknown journeyman from Chile, birdied three of his final six holes Saturday to shoot 1-under 71, giving him a three-shot lead over Matt Fitzpatrick and Will Zalatoris heading into the final round of the PGA Championship.

The 27-year-old Pereira was at 9 under for the tournament after an up-and-down round that began with two early birdies, contained four bogeys during a five-hole stretch making the turn, and ended with a brilliant birdie putt on the 18th.

Zalatoris, the second-round leader, followed rounds of 66-65 with a shaky 73 at Southern Hills that left him tied with Fitzpatrick, who played back side in 3 under Saturday to join Zalatoris at 6 under for the championship.

Bubba Watson, whose 63 on Friday tied the PGA record, was on the move again early Saturday. But he stumbled badly down the stretch, making three bogeys over his final four holes to finish seven shots off the lead.

Bubba Watson carried the momentum from his blistering second-round 63 into the third round at the PGA Championship, where he played the front side in 1 under Saturday to reach 6 under for the tournament and climb into second place.

Watson bounced back from a bogey at the third with a birdie at the fourth and one at the seventh, though he gave up another shot at the par-4 10th. That left the 2012 Masters champ three shots behind Mito Pereira.

Watson was tied with Will Zalatoris, the first-round leader, who missed a series of short putts and played the front in 4 over. That left him 5 under for the championship.

Chile’s Mito Pereira is opening a lead with a big start in the third round of the PGA Championship.

Pereira opened with two birdies in the first five holes to get to 10 under in the cool and wet conditions at Southern Hills. Will Zalatoris started the round with a one-stroke lead before a shaky putter saw him drop three shots after six holes.

Pereira is in his first season on the PGA Tour.

First-round leader Rory McIlroy’s struggles continued. He has dropped eight shots off the lead after a double bogey on the par-3 sixth Saturday. McIlroy looked ready to chase a fifth career major when he topped the leaderboard with a 65, but he has gone backward since then.

On his 49th birthday, Cink made an early birdie Saturday to remain in contention at Southern Hills. The 2009 British Open winner began the day at 3 under, six shots behind Will Zalatoris, who happens to be 24 years his junior.

Mickelson, who withdrew rather than defend his title this week, became the oldest major winner with his victory last year at Kiawah Island. Mickelson surpassed the mark set by Julius Boros, who was 48 when he won the 1968 PGA.

Cink was 48 when he won last year’s Heritage at Harbour Town Golf Links.

Overnight leader Will Zalatoris has teed off in the third round of the PGA Championship, where the former Wake Forest standout will try to continue a trend of halfway leaders winning major titles at Southern Hills.

In four previous PGAs and three U.S. Opens at the course, the leader after 36 holes went on to win the tournament.

Zalatoris, who has never won on the PGA Tour, shot rounds of 66-65 to take a one-shot lead over Chile’s Mito Pereira into Saturday. Justin Thomas was two more shots back before bogeying the opening hole of his third round.

Webb Simpson posted one of the lowest scores of PGA championship so far with a 65 that proved there are some good rounds available in the blustery conditions at Southern Hills.

The 2012 U.S Open champion had barely made the cut after his second-round 75 and went off early Saturday on a soggy and windy course. But Simpson made it look easy while others struggled badly in the morning.

He had two birdies in the first four holes. His eagle on the par-5 13th when he holed a wedge from the fairway was the shot of the morning.

Simpson said his round surprised him because he normally doesn’t like playing in cold weather. His 5-under round got him to 1 under for the tournament.

Tiger Woods shot the worst round of his PGA Championship career Saturday, hitting two shots into the water, making five straight bogeys for the first time in a major championship and finishing with a 9-over 79 at Southern Hills.

It was 10 shots worse than his score on Friday, when he barely made the cut, and left him 12 over for the tournament.

Woods actually rallied down the stretch Saturday, playing the last five holes in 1 under. And when he rolled in a 36-footer for his only birdie at the par-4 15th, he finally allowed a smile to slip amid a round full of painful grimaces.

He narrowly avoided matching his worst round in a major championship, which came when he shot 10-over 81 during the third round of the 2002 British Open at Muirfield. That was the same year he won the Masters and U.S. Open.

Kramer Hickock made perhaps the most incredible bogey of the PGA Championship during his third round Saturday.

Hickock had hit into the greenside bunker at the par-4 12th before his shot out of the sand caught the lip and bounced back toward him. The ball wound up hitting his foot, which would have been a penalty before a 2019 rules change, and it settled into his deep foot print in the sand in a nearly unplayable position.

With several inches of sand in the way, Hickock hammered at the ball but couldn’t get it out of the bunker.

This time, it rolled back to the bottom of the trap and gave Hickock a decent lie. And with his third shot out of the bunker, and his fifth on the hole, Hickock merely holed out for the crowd-pleasing bogey.

Tiger Woods made an 8-footer for bogey at the par-4 ninth at the PGA Championship on Saturday for one of his worst nine-hole scores in a major. He finished the front side in 6-over 41 on a cold and windy morning at Southern Hills.

The final hole of the front side was an odd adventure.

Woods had driven into the fairway bunker 100 yards short of the green when his next shot buried into the lip, which rose sharply in front of him. Because Woods was no longer in the bunker, he was allowed a free drop within a club length of the spot, giving him a good lie in the fairway. He still missed the green from there.

Tiger Woods put two shots in the water over his first six holes during the third round of the PGA Championship, including one on the par-3 sixth Saturday that eventually resulted in a triple bogey.

The trouble began at the par-4 second, when Woods found the meandering stream off the tee but managed to make bogey.

Four holes later, he hit another tee shot into the water at the 218-yard sixth and everything unraveled. He played from the drop area and hit into the rough left of the green, then left his pitch short of the putting surface. Woods finally chipped to within 2 feet and made the putt for a six that left him 7 over for the championship.

Woods did not have a penalty shot over his first two rounds at Southern Hills.

Tiger Woods has picked up where he left off at the PGA Championship, but only briefly.

Woods one-putted five of his last six holes at the end of the second round, including a pair of 15-foot par putts, that allowed him to rally to make the cut at Southern Hills.

He began the third round by holing a 15-foot par putt. But on the second hole, Woods put his tee shot into the meandering stream. It was his first penalty shot of the week. He wound up with a bogey and was 4 over for the tournament. A conventional par on No. 3 left him 1 over for the round.

Temperatures have yet to top 60 degrees, and Louis Oosthuizen arrived wearing a full face scarf to cope with the chill.

Of the early starters, Webb Simpson is 2 under through four holes, but hardly making up much ground.

Out with the wind, in with the rain at the PGA Championship on Saturday.

Southern Hills had about a half-inch of rain in the early morning hours, along with a lightning show that delayed the start of the third round by some 30 minutes. That left the course a little softer as it was starting to get firm.

Will Zalatoris has a one-shot lead and won’t tee off until early afternoon. On deck is Tiger Woods, who showed great fight in his finish for a 69 to make the cut by one.

Woods was 12 shots behind.

Denial of responsibility! Verve Times is an automatic aggregator of the all world’s media. In each content, the hyperlink to the primary source is specified. All trademarks belong to their rightful owners, all materials to their authors. If you are the owner of the content and do not want us to publish your materials, please contact us by email – [email protected]. The content will be deleted within 24 hours.
GolfMen's golfMen's sportsPGA ChampionshipsSportsTiger WoodsWill Zalatoris
0
Share FacebookTwitterGoogle+ReddItWhatsAppPinterestEmail

A$AP Rocky and Rihanna “Over the Moon” About Baby Boy

What Fitness Pros Do When They Don’t Feel Like Working…