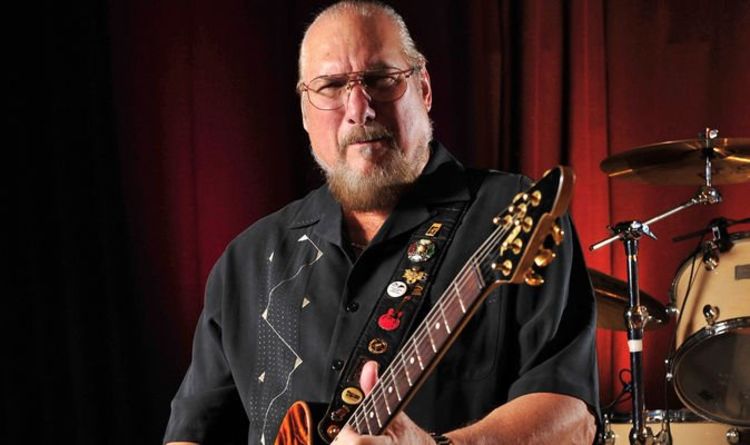 King Of Blues: Steve Cropper on writing the songs that made the 60s swing | Music | Entertainment

Call him a living legend and Steve chortles. And when I mention that Mojo magazine voted him the all-time second greatest guitarist behind Jimi Hendrix, he replies, “I’d never consider myself in those ranks. I don’t believe my own press. It’s just malarkey.” Cropper is that rare thing, a modest American with absolutely nothing to be modest about. He has played with everyone from Booker T & The MGs to Bob Dylan, via the Blues Brothers and George Harrison. Yet Steve, 79, has too much work ethic to hang up his Telecaster now.

The star, nicknamed The Colonel, has just released Fire It Up – his “first proper solo album since 1969”.

“I hope when people hear it everybody will be ready to dance and party again,” he says. Amen to that.

Cropper sold his first song, Ducky, 63 years ago to US rocker Bill Justis who renamed it Flea Circus and made it the B-side of his 1959 hit Cloud Nine. “I got my first royalty cheque for that – $30, which was a lot of yards back then,” Steve chuckles. “I said, ‘Man, this is what I want to do!’

“Shame I cashed it; it’d be nice to have that one framed. I framed a royalty cheque recently, it was for one cent! It must have cost them 50 cents to send it!”

1967’s The Dock Of The Bay was the sixth most performed song of the 20th century, but working with Otis was “just a fluke”, he says.

Cropper was A&R director for iconic soul label Stax Records in 1962 when he first clapped eyes on “big ol’ tall guy” Otis who had driven guitarist Johnny Jenkins to the studio and asked to audition.

The King of Blues has just released his first proper solo album since 1969 – Fire It Up (Image: Getty)

At 6ft 3in Redding, nicknamed “The Champ”, was “bigger than life. He was so warm and streetwise. He knew how to talk to people. I remember being with him in New York and thinking, ‘I don’t want this to stop’.”

But sadly stop it did when Otis died in a plane crash in December 1967. “Right before, we’d cut a lot of stuff in the studio and wrote real good songs. Otis didn’t just put in a day’s work and go home. He just kept going until 6am.”

Redding had the melody for Dock Of The Bay and a couple of lines from when he’d stayed on a houseboat watching ferries roll into San Francisco Bay.

“We sat down together and within two hours we had the whole thing. That was the last time I saw him.”

Steve had to finish the classic song in a heart-breaking Christmas recording session.

Has he ever worked with another singer that impressive? Steve pauses. “The only other artist who sang a song like it was the last song he was ever going to sing was a Welsh guy…what was his name?”

I suggest a few, then it comes to him. “Rod Stewart,” Cropper says triumphantly. Ah yes. He of the famous Taf tartan…

Cropper was born on a small farm outside Dora, Missouri, in 1941, and now lives in Nashville with his second wife Angel. The couple have two grown-up children.

He was nine when his parents moved to Memphis, where he fell under the glorious spell of gospel and R&B played by local black radio stations. At 14, he owned his first guitar and taught himself to play 12 bar blues instrumental Honky Tonk.

Steve and pal Donald “Duck” Dunn would sneak into Club Handy underage. “Booker T Jones was playing bass, and was younger than us. I was still in high school, maybe 16. Booker warned us, ‘If you see police, you get out of here’.

Steve’s high-school band The Royal Spades became Stax house band the Mar-Keys. “We used to play venues a week after Ike and Tina Turner. Man, they were a tough act to follow.”

Along with Motown, Stax dominated 1960s soul, but they were very different.

“Motown were all about pop radio, we were all about ethnic radio,” explains Cropper. “We wanted crossover records.” He worked his way up from engineer to vice president. A jam in unexpected studio downtime became Green Onions – Booker T & The MGs’ first single.

As Stax VP, Steve would start at 7am. “Sometimes I’d work all night, then run home for a shower, and maybe an hour’s sleep and then head back to work, or I’d go and write with Eddie Floyd.

“One day Eddie said, ‘I’ve got a great idea for a hit… I want to write a song about superstitions’. So, we talked about rabbit’s feet and walking under ladders and I asked what else people did for good luck. He said, ‘They knock-knock-knock…’

“I said, there’s our song right there! That was the genesis of Knock On Wood.”

Stax owners Jim Stewart and Estelle Axton were “the most honest people ever to own a record company”, says Steve. “Jim would sit up for hours and make sure that artist and writer got every penny that was coming to them.”

In contrast, he recalls bumping into the Supremes at a DJ convention in Chicago. “They were on their third No. 1 and hadn’t received a royalty cheque.”

Cropper describes his guitar style as “listening for holes and filling them… I’m an instinctive player, I play what I feel. I don’t spend hours sitting at home practising, for me the fun is to create and make music.”

His influences include the incredible Lowman Pauling of The 5 Royales with his comically long guitar strap – “he’d play rhythm with it down by his knees, and when he played a lick he’d pick it up!”

And blues giant Albert King who “was left-handed so instead of pushing his notes he’d be pulling them. I’d have to stand on my head to play like that!”

After Cropper left Stax in 1970, he set up TMI studios, working with the likes of Tower Of Power, Jeff Beck and Ringo Starr.

Tragically, an attempt to reform The MGs floundered when Al Jackson was murdered in Memphis.

Cropper and Dunn, with Willie Hall, went on to form The Blues Brothers Band, touring with John Belushi and Dan Ackroyd. “We made blues danceable, it was the same way we played in high school.”

Booker T & The MGs were inducted into the Rock And Roll Hall Of Fame in 1992; Steve made the Songwriters Hall Of Fame too.

He never stops. In the past decade, he’s toured with the Animals twice, but he reveals “I can’t embellish stuff like I used to. My hands won’t do what my brain tells them to. The first time it happened was two years ago in Tucson with my wife’s band. So I just played what I could.”

“If I’m able to go on the road, I will though. We’ll see what happens.”