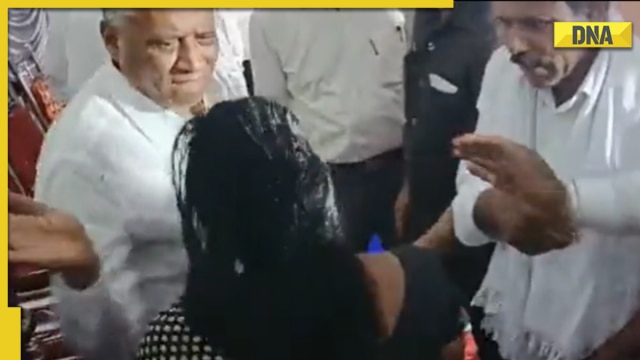 In a viral video that has sparked a lot of outrage on social media, a minister in Karnataka can be seen slapping a woman on camera while surrounded by his security personnel during a seemingly public event. The video has now been shared by multiple Congress leaders on social media.

The video shows Karnataka minister V Somanna, who is a Bhartiya Janta Party (BJP) leader, slapping a woman who had approached him during an event where he was distributing land titles. Now, Karnataka Chief Minister Basavaraj Bommai has sought an explanation from the minister.

A woman approached Somanna during the event, while he was surrounded by both male and female security personnel. Just as she confronted the minister, he slapped her, after which she promptly touch his feet in the viral clip.

What a difference from the way @RahulGandhi began the Karnataka leg of #BharatJodoYatra from the very same Gundlupet on 30th September! This shameless man should be sacked immediately! https://t.co/doPz27D0aH
— Jairam Ramesh (@Jairam_Ramesh) October 23, 2022

V Somanna is the minister of infrastructure development in Karnataka, and it was alleged that the altercations between him and the woman took place because the beneficiaries for the distribution of the title deeds were not appropriately selected.

Tweeting the video, senior Congress leader Randeep Surjewala said, “Arrogance has gone to the heads of BJP minister and leaders in Karnataka. On one hand, people suffer the huge brunt of #40PercentComission & on the other, women get slapped by ministers drunk with power. Where is our PM? Will u dismiss the Minister, Mr. Bommai?”

Demanding that Somanna be fired from his post, Congress leader Jairam Ramesh tweeted, “What a difference from the way Rahul Gandhi began the Karnataka leg of Bharat Jodo Yatra from the very same Gundlupet on 30th September! This shameless man should be sacked immediately!”

Denial of responsibility! Verve Times is an automatic aggregator of the all world’s media. In each content, the hyperlink to the primary source is specified. All trademarks belong to their rightful owners, all materials to their authors. If you are the owner of the content and do not want us to publish your materials, please contact us by email – [email protected]. The content will be deleted within 24 hours.
Basavaraj Bommaibharat jodo yatraBhartiya Janta PartyBJPbjp minister slaps womancongressKarnatakaKarnataka minister slaps woman
0
Share FacebookTwitterGoogle+ReddItWhatsAppPinterestEmail