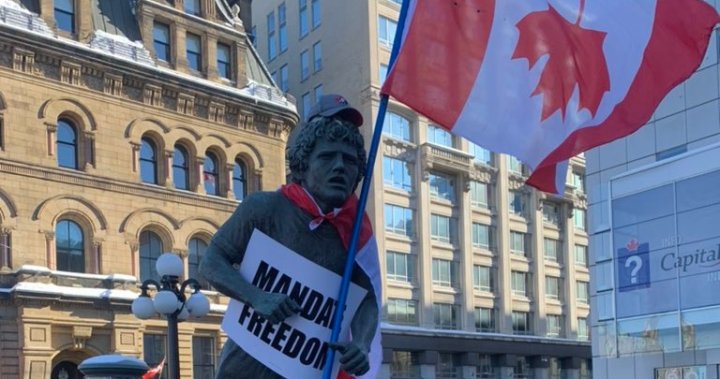 The mayor of Terry Fox’s British Columbia hometown is among those venting anger Saturday, after a statue of Canadian icon Terry Fox was covered in political statements at an Ottawa rally opposing COVID-19 measures.

“To have someone try and appropriate his legacy and his image for a political cause, whatever the cause, is just sickening,” Port Coquitlam Mayor Brad West told Global News, describing the action as an “appropriation.”

I’m the Mayor of Terry Fox’s hometown. He’s our city’s hero, national inspiration and an unifier. Whatever your cause, you don’t get to appropriate his legacy and you don’t touch his statue. Ever. This should be removed immediately. @ottawacity @JimWatsonOttawa https://t.co/Souo0BodaJ

Photos from the rally showed the statue holding an upside-down Canadian flag, along with a sign that reads “mandate freedom.”

Ottawa Mayor Jim Watson said he had instructed city staff to remove the items, but within an hour new photos appeared on social media showing the statue holding a new protest sign.

Fox, a cancer patient and amputee, was born in Winnipeg, but raised in Port Coquitlam, B.C. The 22-year-old became a national icon with his 1980 attempt to run across Canada to raise money for cancer research.

Fox lost his battle to cancer in 1981 before he could complete his cross-country journey, but became a national inspiration. Millions of dollars have since been raised in his name for cancer research.

“No one should ever try and take the feelings Canadians have about Terry Fox and use them for their own political purposes,” West said, adding that Fox was a unifier who should be above politics.

“It’s disgusting, it’s wrong and it’s also not going to work. I think this has backfired tremendously on whoever thought that was a good idea.

terry fox sacrificed everything for people with cancer. shameful as there are now thousands without access to cancer treatments as our hospitals care for the unvaccinated. pic.twitter.com/FY2HVaHYX6

“If I lived closer Ottawa I’d do what I think a lot of people in Port Coquitlam want to do right now, which is I’d drive my truck right over there and I’d tear that crap off the statue myself,” West added.

West was not alone in condemning the appropriation of the statue.

Numerous people took to social media to point out that thousands of Canadians have had their cancer treatments delayed, after provinces cancelled surgery due to COVID-19 pressure on hospitals.

“Terry Fox sacrificed everything for people with cancer. Shameful as there are now thousands without access to cancer treatments as our hospitals care for the unvaccinated,” Toronto doctor Andrew Baback Boozary posted to Twitter.

“Terry Fox died of cancer that he exacerbated on his Marathon of Hope running across Canada trying to raise money to fight a deadly disease – quite the opposite of what’s happening here,” Moore wrote.

“Have a protest, do your thing, don’t disrespect this monument of a Canadian hero.”

The Terry Fox Foundation also took to Twitter Saturday, sharing a photo of the statue in its normal state, writing about Fox’s legacy without mention

The Terry Fox Foundation is proud to continue Terry’s mission of funding cancer research. Terry believed in science and gave his life to help others. Thank you to all of our supporters who help us work toward realizing Terry’s dream of a world without cancer. ???????? pic.twitter.com/5MSky1YfVM

Saturday’s rally at Parliament Hill was the culmination of a cross-country truck convoy that began out of opposition to the elimination of a vaccination exemption for cross-border truckers.

The event, which drew thousands of people to Ottawa, has since morphed into a catch-all, some of who have called for the end to all COVID-19 measures, and even the removal of the government.

Denial of responsibility! Verve Times is an automatic aggregator of the all world’s media. In each content, the hyperlink to the primary source is specified. All trademarks belong to their rightful owners, all materials to their authors. If you are the owner of the content and do not want us to publish your materials, please contact us by email – [email protected]. The content will be deleted within 24 hours.
COVIDcovid protestcovid rallycovid-19Freedom ConvoyHealthottawa protestPolitics
0
Share FacebookTwitterGoogle+ReddItWhatsAppPinterestEmail

Hockey for all: Taking back the narrative